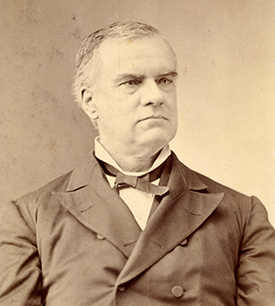 Samuel Field Phillips, solicitor general of the United States and Republican political leader during Reconstruction, was born in Harlem, N.Y., the son of the Reverend James Phillips, a native of England, and Judith Vermeule Phillips of Plainfield, N.J. In 1826 the family moved to Chapel Hill, N.C., where James Phillips accepted a professorship of mathematics, which he held until his death in 1867. Samuel, along with his brother Charles and sister Cornelia (later Cornelia Phillips Spencer), was tutored by his parents at home. He then entered The University of North Carolina, graduating with first honors in 1841 at age seventeen. After studying law under President David L. Swain and then at the newly established university law school, he was admitted to the bar and began a practice in Chapel Hill as soon as he came of age in 1845.

Phillips was married twice, first in 1848 to Frances Lucas, of Chapel Hill, who bore him eight children before her death in 1883. One son and four daughters survived him. His second wife, whom he married in 1889, was Sarah Maury of Washington, D.C. She died in 1902.

According to his associates Phillips possessed a brilliant, reflective mind and a dispassionate temperament. His legal practice got off to a slow start in Chapel Hill, but he quickly developed into one of the most successful and respected lawyers in the state. From 1854 to 1859 he taught in the university law school. At the same time he embarked on a political career of some distinction. A Whig in politics, he was elected to the House of Commons in 1856 and 1858 and took an influential part in its proceedings. He opposed secession but accepted the decision when it was made. During the war he served on the state Court of (War) Claims, and when that body was superseded by the office of state auditor, he became its first incumbent. He was again elected to the House of Commons in 1864 and 1865 and unanimously chosen speaker in the latter year. Elected also to the constitutional convention of 1865, he was one of its leading members.

The advent of congressional Reconstruction caused Phillips some indecision. As a consistent Whig he never affiliated with the Democratic party, but he refrained from joining the Republicans formally until 1870. Instead, he devoted himself to his growing law practice. He moved to Raleigh in 1867 after forming a partnership with R. H. Battle; a later partner was Augustus S. Merrimon. From 1866 to 1871 Phillips was official reporter of the state supreme court. In 1870 he served on a threeman panel appointed to investigate alleged frauds in the state government.

On joining the Republican party, Phillips was at once admitted to its inner councils. He received the nomination for attorney general in 1870 but was narrowly defeated in a race that also saw the Democrats win control of the legislature. The next year he was elected to the legislature from Wake County (he had previously represented Orange), becoming Republican house leader. During the successful 1871 and 1872 campaigns, he served as chairman of the Republican state executive committee. In the same years, as an assistant federal district attorney, he also prosecuted Ku Klux Klan cases before the circuit court in Raleigh. In part because of this experience, he received an appointment as solicitor general of the United States late in 1872, necessitating a move to Washington, D.C.

Phillips's capability as solicitor general was attested by his long tenure of twelve years under four Republican presidents. With the return of a Democratic administration in 1885, he took up a lucrative private law practice in Washington before the Supreme Court and lesser tribunals. As solicitor general Phillips had been overruled as the Supreme Court dismantled much of the civil rights legislation enacted by Congress during Reconstruction. As a private practitioner one of his most important cases was Plessy v. Ferguson (1896), in which he and his former North Carolina associate, Albion W. Tourgée, unsuccessfully fought the separate-but-equal doctrine relating to public accommodations for African-Americans.

He retired from practice about 1900 and died in Washington three years later. He was buried in Chapel Hill. Phillips was a lifelong Presbyterian.

Charles Phillips Russell, The Woman Who Rang the Bell: The Story of Cornelia Phillips Spencer (1949 [portrait]).