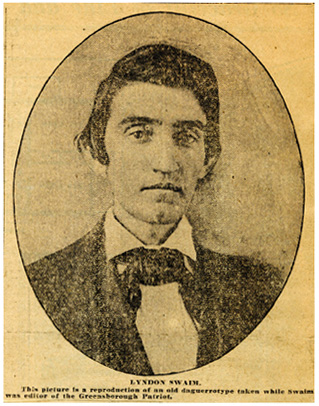 Lyndon Swaim, printer, newspaperman, and architect, was the oldest of eleven children. His father, Moses (31 Dec. 1788–25 Apr. 1870), married Adah Swindell (17 Apr. 1791–2 May 1866) of Hyde County on 13 Feb. 1812. The family had a farm on Deep River in Randolph County's Timber Ridge community. The nearby village of New Salem was incorporated by legislative act in 1816, and Moses Swaim had been appointed one of the five town commissioners. The same year the elder Swaim had helped to found the North Carolina Manumission Society and was elected its first president. Whether Moses practiced law in addition to farming is unknown, although he was clerk of the superior court in Randolph County from 1837 to 1840. In the 1850s Swaim emigrated to Indiana, where he settled on the St. Joseph River, north of South Bend. He died during a subsequent visit to North Carolina.

Lyndon Swaim left home in 1834 at age twenty-two to work for his cousin, William Swaim, in the printing office of the Greensborough Patriot. After William's death in 1835, Lyndon returned to New Salem and became employed in the printing office of another cousin, Benjamin Swaim, editor of the Southern Citizen. In 1839 a delegation of Greensboro citizens urged Lyndon to take charge of the moribund Patriot. "We need a paper amongst us that will be regularly issued, that will be fixed in its Whig principles and that will advocate with spirit and fearlessness the Whig cause," they frankly admitted. Swaim decided to accept their offer and, in partnership with yet another cousin, bought the ailing newspaper. Michael Swaim Sherwood (b. 1816), the son of Benjamin (1783–1865) and Sally Swaim Sherwood (b. 1787), was to handle the mechanical and business affairs of the printing office, while Lyndon attended to editorial matters. In accordance with the call for a strong Whig point of view, Swaim promised in his first editorial to "advance all well-judged plans for the improvement of the internal commerce of the state and that system of school education which may reach every child in the land."

After devoting the next fifteen years to the Patriot, Swaim sold out to Sherwood in 1854 in order to work full time as clerk of the county court. He held that office continuously from his initial election in 1853 until it was abolished by the new state constitution of 1868. In addition, he served as a commissioner of Greensboro in 1846, 1850–52, and 1859–62 and was appointed a town commissioner under the provisional government of Governor W. W. Holden. As his final public service, Swaim represented Guilford County in the state legislature in 1876–77. 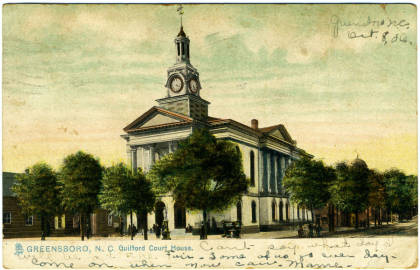 He temporarily took over the editorial helm of the Patriot once again in 1869, when he counseled moderation and reconciliation in the face of Reconstruction turmoil. At the same time, he began to study architecture and subsequently left the newspaper to start a professional practice. Successful in his new career, Swaim became known as the town's leading architect of the 1870s and 1880s. Although the facts of this stage of his life are as yet unclear, he is said to have designed residences as well as commercial buildings in Greensboro and surrounding communities.

On 3 Jan. 1842 Swaim married Abiah Shirley Swaim, the widow of his former employer, William Swaim. Their only child died in infancy. Swaim's stepdaughter, Mary Jane Virginia, became the mother of William Sydney Porter (O. Henry). Abiah Swaim died in January 1858, and on 25 Oct. 1859 Swaim married Isabella Logan (d. 9 Feb. 1900), the daughter of General John M. Logan of Greensboro. They had four children: Isabella, Mary, Lyndon, and Logan; none married. Swaim was one of the ruling elders of the First Presbyterian Church in Greensboro from 1872 until his death at age eighty after several years of declining health.