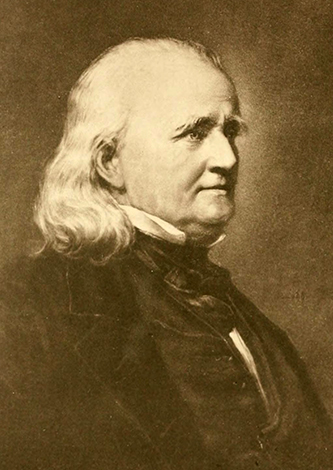 Joseph Gardner Swift, engineer and soldier, was born on the island of Nantucket, Mass. As the son of Foster and Deborah Delano Swift, he was descended from two distinguished New England families. His physician father served as a naval and an army surgeon. At seventeen Swift became a cadet in the corps of artillerists and engineers at Newport, R.I., was transferred to West Point, N.Y., as the U.S. Military Academy was being organized, and became its first graduate, a second lieutenant of engineers, on 12 Oct. 1802.

Military orders initiated Swift's lifelong association with the state and people of North Carolina. In June 1804 he was at Fort Johnston in Smithville to develop a plan of defense for the Cape Fear harbor and build batteries already contracted for by General Benjamin Smith. He soon was on close terms with Benjamin and Sarah Dry Smith, who sponsored him among the families of the area. Swift was the general's second in his duel with Maurice Moore; fifty years later Swift provided the tombstone for the Smiths' grave at St. Philip's, Brunswick, installed by his namesake, Dr. Swift Miller of Wilmington.

The fledgling American military establishment gave splendid advancement opportunities to bright, well-connected young men, and Swift moved rapidly through the ranks to full colonel at age twenty-eight. On 31 July 1812 the U.S. Senate confirmed his appointment as chief engineer of the army over a list of military and civil candidates that included Robert Fulton. Swift spent a great deal of time supervising the development of defenses along the Carolina coast. He was engineer of James Wilkinson's army during its unsuccessful invasion of Canada in 1813 and was breveted brigadier general in 1814. Shock caused by the burning of Washington, D.C., energized the citizenry of New York to volunteer in great numbers to help Swift fortify that city and its approaches, even as a British fleet stood offshore; his reward was to have his portrait painted for the city hall. He again served the city in the great fire of 1835 by directing the demolition of buildings in its way.

After the War of 1812 partisan politics made his position as chief engineer intolerable, although he continued as ex officio superintendent of West Point, a position he had assumed when the superintendent was obliged to leave in April 1807. In November 1807, promoted major, he was in charge of the defense of the Eastern Department, consisting of the coastal regions of Rhode Island, Massachusetts, New Hampshire, and Maine. Swift resigned from the army in 1818. Maintaining his friendships within the military establishment, however, he was an engineering consultant to the army for many years and a frequent associate of such men as General Winfield Scott, who was almost exactly his contemporary.

Swift became surveyor of the port of New York, chief engineer of a number of new railroads, director of harbor and shore developments on Lake Ontario, and, between jobs, a mediocre farmer. He made Geneva, N.Y., his home but traveled widely in North Carolina and elsewhere on various consultations. His active encouragement of many younger men made Swift important to the development of American military and civil engineering.

From very early in life Swift made notes on events and the people he met; from time to time he consolidated these diaries into a journal and made the last entry six months before his death. Covering a span of sixty-five years, the journal is full of anecdotes of persons and movements between the Revolution and the Civil War by one who knew almost everyone of consequence during that time and had strong opinions about almost everything, including the worth of the presidents under whom he served (President James Monroe alone achieved his full approval).

A slave owner, Swift resented abolitionist efforts to disturb his servants but freed them. And though he opposed interference with the institution of slavery in the slave states, he opposed its extension elsewhere; the last words in his journal are a plea for humane treatment of Confederate prisoners and a stern opposition to Southern independence. Swift left the Masonic order because he considered it un-American. He advocated the purchase of Canada and was, successively, a bitterly partisan Federalist/Whig/Republican. He revered family history, the heroes of the Revolution, and especially George Washington: whenever he met a contemporary of Washington, as during the triumphal tour of General Lafayette, he asked whether the general had actually sworn at Charles Lee at the Battle of Monmouth. When the citizens of Wilmington gave him a testimonial dinner, he proposed a toast to "North Carolina and her liberal spirit, as evinced in her carte blanche order to Canova for a sculpture of Washington, at an expense limited only by the artist's decision."

An active and opinionated Episcopalian, Swift was a founding trustee of the General Theological Seminary in New York City, a founder of the American and Foreign Bible Society, and a founding officer of the New York City Philharmonic Society. As president of the Handel and Haydn Society, he "got up the first oratorio in the United States, a great improvement to the musical taste of our country."

DAB, vol. 18 (1936), which states that Swift's military papers are at West Point and that his letters are in the New York Public Library.