In 1752 Toomer was a member of George Merrick's militia company. His first appearance in court was as a juror in 1761. He posted his first security bonds in the court in December 1765 and posted at least another thirty-three by the time of his last recorded action in August 1793. His activities in the real estate market were first documented in 1765; by 1798 the records show at least thirty-five such transactions, many of which were for land that he held for only a few years. In 1766 Toomer was among those who signed letters relating to the Stamp Act rejection by the citizens of Wilmington, and he was a signer of the letter to Governor William Tryon in July 1766.

Named inspector for Wilmington in 1767, Toomer was reappointed in 1768, 1769, 1772, 1773, and 1785. He ran unsuccessfully for sheriff in 1774. On 3 July 1775 he was elected to the Wilmington Safety Committee, of which he remained a member through its last recorded meeting on 9 Feb. 1776. He also served on the committee to take a census of all white male and free mulatto inhabitants of the town of Wilmington between the ages of sixteen and sixty. 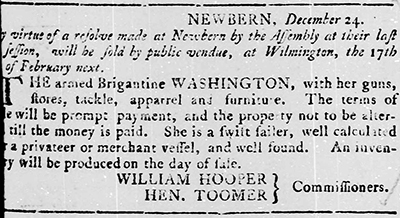 His first recorded action as a commissary during the Revolutionary War was in August 1775, when he furnished beef. By January 1776 Toomer was responsible for providing a barracks for regulars to use as a hospital as well as the nurses for the hospital. In March 1776 the Provincial Council officially designated him a commissioner for the district of Wilmington, and in June the Council of Safety appointed him commissary to the detachment of militia from the Halifax Brigade. During this time he was also a captain in command of militia companies. In April 1777 the senate named him a marshal for the Port of Brunswick. That July he was selected one of the commissioners to take possession of estates of those opposing the Revolution, but in May 1780 he joined other Wilmington merchants in protesting to the Assembly that the canceling of debts owed to the English would lead to the loss of future credit to North Carolina merchants. In August 1777 Toomer was named a commissioner for the ship Washington, and later that year he was appointed with William Hooper to sell the ship. The next year he was assigned to the commission to regulate the pilot fees at Cape Fear bar. In May 1779 he was designated deputy quartermaster by the senate. His final recorded commissary action was in April 1780.

In 1784 Toomer was named both to a committee to purchase land for a jail in Wilmington and to a commission to lay out a town adjoining Fort Johnston on the Cape Fear River. From 1786 until his death he apparently served as coroner in Wilmington, a post his father had filled soon after his arrival. He also provided funds for other traders when money was scarce or unavailable from other sources.

Toomer married three times. His first wife was Mary Vanderhorst, of Charleston, S.C., by whom he had a son, Anthony B. He next wed Mary Grainger, of Wilmington, and they had a daughter, Mary J. He and his third wife, Magdalene Mary De Rossett (b. 2 Feb. 1762) of Wilmington, were the parents of Eliza, Anthony, John De Rossett, Lewis D., and Mary Fullerton.