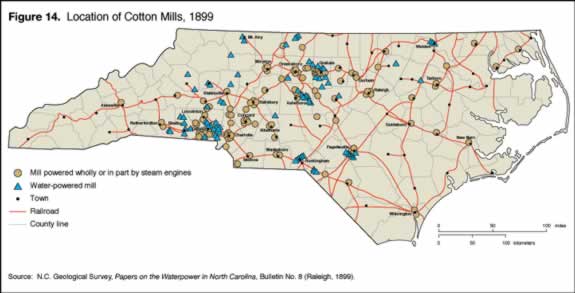 A few textile mills operated in North Carolina prior to the Civil War but they were small and primarily supplied local markets. The real beginning of the industry did not occur until the 1880s. D. A. Tompkins, first owner of the modern Charlotte Observer, was one of the principal spokesmen for the New South movement that advocated industrialization as a way to revive the South's post-Reconstruction economy. Tompkins used the Observer's editorial page as a bully pulpit to promote this cause and even published a manual for prospective mill developers. In it he advocated organizing mill villages away from  cities, where mill owners could maintain control over their labor forces.


Borrowing from the experience of New England industrialists, the North Carolina mill owners initially used waterpower as their primary energy source.  The fast flowing streams of the Piedmont offered the greatest array of such energy sites within the state. However, by the end of the century an increasing number of mills supplemented water power with steam engines or relied on steam engines entirely. This is illustrated in the map of the Location of Cotton Mills, 1899.  Steam engines had the advantage of allowing the mills to be located at sites on the railroad lines. Some of the earlier water powered mills were not on the rail lines and had to haul raw cotton bales in and finished cloth out in wagons over typically poor roads, adding significantly to their cost of doing business.

In 1884 Thomas A. Edison personally supervised the installation of the first electrical dynamo in the South in a mill in the Gaston County town of McAdenville. Its purpose, however, was to provide lighting so as to extend the workday, not power the machinery. By the early twentieth century improved technology for generating and transmitting electricity gave mill owners greater locational freedom. However, the conversion to electricity was slowed as the mills had to install new machinery that could be powered by electrical motors.


The industry continued to expand and by 1929 southern textiles had surpassed New England in the number of spindles operating in its mills and  in the amount of cotton consumed.  North Carolina led the South, accounting for over one-third of the number of spindles among the six leading southern states.  More efficient southern mills, no longer satisfied with producing only cheap cloth, began taking markets away from the increasingly obsolete New England factories.

Dispersion of Factories and Population

The textile industry reinforced the dispersed settlement pattern of North Carolina.  In the North and elsewhere, industrialization reinforced urbanization.  However, in North Carolina, manufacturing enterprises, especially textiles, were located mostly in mill villages rather than in the cities of the Piedmont, as shown in the map of the Location of Textile Mill, 1931.  These modest towns were strung along the railroad line and seldom developed other economic functions.  Workers moved from nearby farms to factories with relative ease and back again as their desires and pockets dictated.  Following Tompkins advice, mill owners had consciously avoided the “bad influences” of the city.  Although subsistence wages, and other forms of economic, religious, and social exploitation existed in the mill villages, a sense of camaraderie emerged among the workforce that made mill life bearable.  Family members often worked together at the mill, recruited kin for mill work, and supported each other through difficult times. Low wages necessitated that everyone in the family work, including children and women.  By the early twentieth century, North Carolina led the nation in the percentage of its female work force in manufacturing. 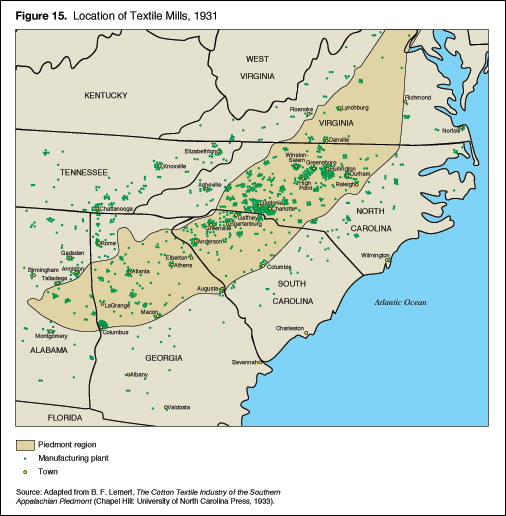 A smaller concentration of furniture plants in the northern Piedmont around High Point and Greensboro and in the western mountains augmented the dispersion of people and jobs associated with textiles.  By 1927 furniture manufacturing employed 15,000.  Tobacco, textiles, and furniture comprised the “Big Three” of North Carolina industries that dominated the state’s economy and leadership for decades.


A study conducted in 1926 compared operating costs in a Massachusetts mill with those in the South. Most costs were similar except for labor, which cost one-third less for a 55-hour workweek in the Southern mill, in contrast to a 48-hour workweek in Massachusetts. This documented the fact that the industry was drawn away from New England by the South's pool of cheap labor. Ironically, this is precisely why so much of North Carolina's industry has declined sharply as production has shifted to low labor cost countries in Asia and Latin America. In the history of industrialization, the textile industry has been "first in and first out." It led the emergence of the Industrial Revolution in Great Britain, then in New England, and now in the US South. It has now left or is leaving these areas and moved offshore.

One of the legacies of the industry's early history is prevailing anti-union attitudes of contemporary factory workers, even though they are among the lowest paid in the country. A major reason for this is thought to be a result of the after effects of several historic labor disputes. In 1929 communist labor organizers called out the workers at the giant Loray mill in Gastonia, where a recently instituted "stretch out" had eliminated hundreds of jobs and increased the work load for the remaining workers. . The strike ended after much violence, including the murder of the Gastonia police chief. As it ended, striking workers lost not only their jobs but also their company housing. In 1934, Franklin Roosevelt implemented the Textile Code that called for a 40-hour workweek, a minimum wage of 25 cents an hour and gave mill workers the right to organize. When the Code's provisions were ignored by mill owners, thousands of mill hands went out on strike and in the violence that accompanied the outage some strikers were killed and others were herded into concentration camps originally built to hold German prisoners of war during World War I.  Again, when the strike was over the strikers lost both jobs and homes. Ironically, in both cases, the mill workers came to blame the unions for their hardships, not the mill owners.  The memory of these bitter episodes remains alive today, as the daughter of one striker said, as a "dirty secret." These strikes are still controversial topics. For example, in 1979 a Charlotte television reporter went to Gastonia to do a story on the 50th anniversary of the Loray strike and no one would talk to him about it on camera. In 1996, a documentary about the 1934 strike, "The Uprising of '34," was broadcast on Public television but the Charlotte PBS station, WTVI, never showed it and the UNC-TV network showed it at midnight on a Saturday.