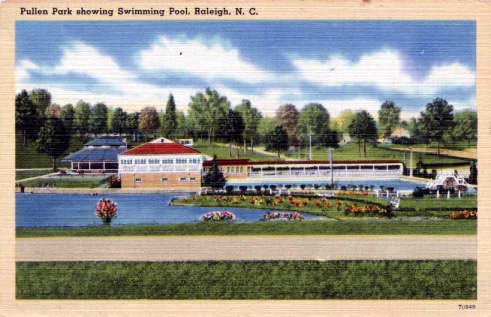 The Birth of Recreation

In 1870, few North Carolinians who lived in the countryside thought of formal places or formal times for "recreation." Their pleasures were rural and often linked naturally with the outdoors and with work. Carolinians of all ages loved to fish and to hunt and savored nothing more than the aroma and satisfaction of a fire crackling under a good day's catch. Labor and leisure, music and work, flowed together easily at a typical corn shucking or quilting bee.

But, with the passing of time, the improvement of roads, and the growth of towns and cities, new kinds of recreational activities and settings emerged. At the county fair, farmers came and showed their animals, while women arrived with pies and breads. A mix of agricultural display and carnival, the county fair was a place where one could see and smell the livestock, ride the rides, perhaps visit sideshows of freaks and voluptuous shady ladies. The largest of the fairs was the state fair, which took place in Raleigh.

As towns became cities and citizens longed for the open spaces and trees of preindustrial communities, recreational parks became a part of the urban landscape. Pullen Park, a gift of eighty acres from businessman Richard Stanhope Pullen in 1887, became a site where Raleighites could picnic, boat, skate, and enjoy nature. Bloomsbury, also at the end of a trolley line and built in 1912 by the Carolina Power and Light Company, was advertised as the Electric Park Amusement Company and provided diversions associated with amusement parks today, such as roller coasters, penny arcades, and merry-go-rounds. A carousel, built by the Dentzel Carousel Company of Philadelphia (1903-9) and featuring the handcarved animals of Salvatore Cernigliaro, was among the most popular features of Bloomsbury Park.

Resorts for the Well-to-Do

It was James Tufts of Boston who founded Pinehurst. His fortune had come through his invention of modern soda fountain equipment that made carbonated water. The head of the American Soda Fountain Company, Tufts was sensitive to the importance of rest and healthful climes because of his own physical frailness. He also loved golf. He heard about the healthful climate of the Sandhills of North Carolina from New Englanders who had wintered there in the 1880s and early 1890s. 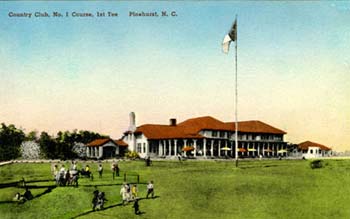 In 1895 Tufts decided to build a resort that would bring relaxation and good health to men and women of moderate means. He bought 5,000 acres of cutover timberland, built cottages and stores, graded streets and constructed a trolley line to nearby Southern Pines, built Pinehurst's first golf course in 1898, and opened the Holly Inn and the grand Carolina Hotel for the accommodation of hundreds of guests.

Two years after the beginning of Pinehurst in 1895, North Carolina's climate lured a second millionaire to the state in search of relief from ill health. E. W. Grove was delighted at the disappearance of his bronchial disorder weeks after his arrival in Asheville.

To transform Asheville into a resort for the finest clients, the "Chill Tonic King" decided he had to end that town's career as a sanctuary for the tubercular. So he bought and burned every sanatorium in town. Simultaneously, the multimillionaire purchased thousands of acres of farmland on Asheville's northern fringe. The stage was set for the fulfillment of his vision: constructing the Grove Park Inn, "the finest resort hotel in the world."

By far the richest man attracted to the mountains of western North Carolina was George Vanderbilt. Son and grandson of railroad tycoons from New York, the bookish but shrewd twenty-six-year-old bachelor found the air and climate of Asheville invigorating and the scenery enchanting. In 1888 he purchased 2,000 acres of land with the notion of building a summer house upon it for himself and his mother. Fortunately, the young millionaire's ideas about what to do with his estate were only half-formed, and he called upon an old family friend to advise him.

The involvement of Frederick Law Olmsted in the shaping of what would become the Biltmore Estate and surrounding forests was momentous, for Olmsted was the designer of Central Park in New York and the nation's leading landscape architect. 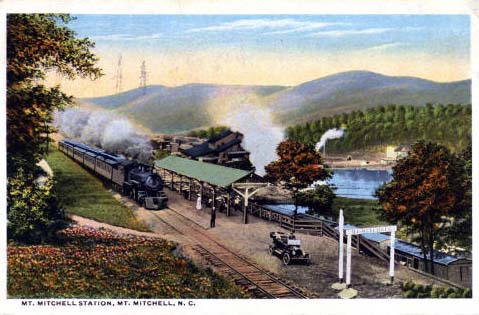 The multimillionaire built both his manor and a model estate. Designed by the aristocratic architect Richard M. Hunt of New York, Biltmore House was a country home without parallel in America. The monumental French chateau was built of Indiana limestone, hauled 600 miles to North Carolina and transported three miles from the main rail line to the house site on a $77,000 private spur. With the terrace and stables, the audacious mansion was 1,000 feet in length and encompassed 250 rooms, all furnished with art treasures from around the world. Its setting was superb and the view from it breathtaking.

The most enduring legacy of the Biltmore Estate came in the domain of forest conservation. At Olmsted's suggestion, Vanderbilt hired Gifford Pinchot—a young Yale graduate and the first American to choose forestry as a profession—to manage his lands.

When Pinchot left—eventually to become the first forester in the United States Department of Agriculture—Vanderbilt placed Carl Schenck of Germany in charge of his lands. In 1898 Schenck founded the Biltmore Forest School, the first such school in America, and used the Vanderbilt forest for a campus.