North Carolina's participation in the world of industry and urbanization, commercial agriculture and tourism, began slowly in the 1870s, grew steadily through 1900, and exploded in the first two decades of the twentieth century. By the 1920s the state took pride in its reputation as the South's most progressive state—a land of factories and business enterprise as well as farms, good roads and improving schools, urban vitality and civic achievement. In urban centers especially, an exuberant vision of progress had triumphed. Town tried to outpromote town and the state to outdo other states in heralding North Carolina and her communities as magnets of growth and commerce. In 1870 most North Carolinians relied on the skills of self-sufficiency to "make do." By 1920 thousands of Tar Heels were making money and thousands more aspired, with a little luck and capital and business cunning, to join the ranks of those who were getting ahead. 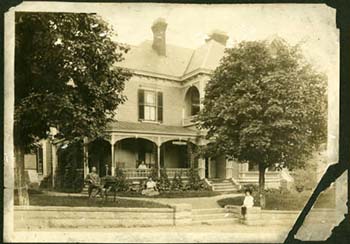 The Lost Home of Thomas Wolfe: Symbol of Change brought by the New South

North Carolina's most famous author, Thomas Wolfe, born in Asheville in 1900 and reared in that community—which he would portray in fiction as "Altamont"—as it crossed the threshold from mountain hamlet to resort boom town, saw in the ambition unleashed by growth peril as well as profit, loss as well as liberation.

Emblematic of the loss of "beauty and spirit" that Wolfe found at the core of the New South triumphant was the boardinghouse that his mother bought in 1906 and that she named "Old Kentucky Home." The dwelling is preserved today as the Thomas Wolfe Memorial. On the surface, the house with the nostalgic name strikes the visitor as a rambling turn-of-the-century home built on a large scale. A wide porch and scattered balconies, high-ceilinged rooms and a sizable kitchen, made the house fit either for a large Victorian family or for a small company of boarders. The piano and overstuffed chairs that crowded the living room suggest the possibility of music and warmth, while the spare furnishings of the bedrooms present a contrast of cold austerity.

There was no ambivalence about the boardinghouse in the memory of Thomas Wolfe. "Old Kentucky Home" stood for the disruption of his family. His mother, Julia Westall Wolfe, mother of eight children who lived past infancy, bought the dwelling at the age of forty-five. In towns with high numbers of tourists or new residents, many married or widowed middle-class women found security and a respectable career in the operation of boardinghouses. Julia Wolfe left the family home to oversee her business venture and took her seven-year-old son, Tom, to live with her. Her husband, W. O. Wolfe, remained home with the older children, a few hundred yards away. From that point on, the youngest son—"with two roofs and no home"—felt that he was a vagabond and a stranger and burned inwardly with the need to understand his loss.

Of progress and its perils in his region, of the richness and rending of his family, and later of his tempestuous life in the North, Thomas Wolfe was to write more than a million words. As he traveled beyond the South, he observed everywhere what he had first seen in North Carolina and the boardinghouse of his youth: an obsession with money, an equation of life with the latest goods and styles. Unable to celebrate the triumph of a consumer society in his native state or the nation, Wolfe worried that "we are lost here in America." "We've become like a nation of advertising men, all hiding behind catch phrases like 'prosperity' and 'rugged individualism' and 'the American way.' And the real things like freedom, and equal opportunity, and the integrity and worth of the individual—things that belonged to the American dream since the beginning—they have become just words too." Yet ultimately the novelist from Asheville was not despondent. The "true fulfillment of our spirit, of our people, of our mighty and immortal land, is yet to come. I think that the true discovery of our own democracy is still before us." For Thomas Wolfe and for other North Carolinians, the American dream was yet to be accomplished, but its achievement was as "certain as the morning, as inevitable as noon." Whether Wolfe the critic or Wolfe the optimist was correct, the decades ahead would determine.

Learn more about economic progress and the New South: