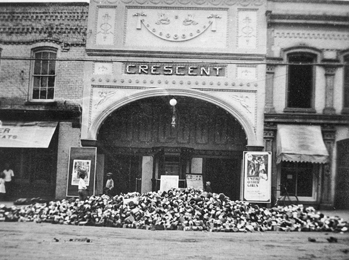 On 5 Apr. 1917 the U.S. House of Representatives passed a resolution declaring war against Germany. North Carolinians' initial reaction was supportive but not enthusiastic. On 5 June President Woodrow Wilson instituted draft registration, and in North Carolina more than 100 percent of eligible men registered-implying that many young men lied about their age in order to be included. The state registered 480,491 men, 142,505 of whom were African American. From the 65 percent found to be physically fit for military service, 40,740 whites and 20,082 African Americans were initially called up.

More North Carolinians were drafted than volunteered, although it is evident that most were willing to serve if called. Some residents joined the war effort even before the United States declared war. Kiffin Yates Rockwell of Asheville, for example, went to France with his brother Paul in August 1914 and joined the French Foreign Legion. Both men were wounded on the western front, Paul in December 1914 and Kiffin in May 1915. Approximately 1,612 North Carolinians evaded the draft.

Many men from North Carolina joined the regular army and served with the First and Second Divisions, becoming the first to reach France in the winter of 1918. Others joined local National Guard units that became part of the Thirtieth, or Old Hickory, Division, and approximately one-third of the draftees in the Eighty-first "Wildcat" Division were North Carolinians. Most North Carolina African Americans served in the Ninety-third Division. The engineer regiment in the Forty-second Division also contained many men from the state. The Thirtieth and Forty-second and units of the Ninety-third arrived in France in the spring of 1918 and the Eighty-first, in August.

In the spring of 1918, Germany initiated five offensives against Allied lines. At Chateau-Thierry and Belleau Wood, U.S. divisions stopped the German advance and took the offensive. North Carolinians served in all of the major battles on the western front in 1918. As part of the American army, they fought in the Battles of 2nd Marne and St. Mihiel and in the Meuse-Argonne, the last major campaign of the war. As part of the British army, the Old Hickory Division fought at Ypres and the Somme and was credited with breaking the Hindenburg Line in September 1918. North Carolina African Americans in the Ninety-third Division fought in the French army with distinction. The Eighty-first Division arrived to fight in the Meuse-Argonne only days before the war ended. On 11 Nov. 1918 the Eighty-first's North Carolinians went over the top. After five hours of savage fighting that morning, the battle was stopped by the armistice ending the war.

Keep reading >>World War I- Part 3: Contributions to Victory on the Home Front