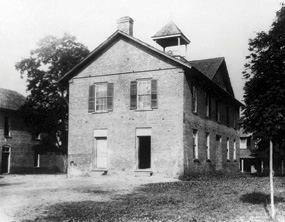 With only a meager education gained in old field schools, Ammons was in 1854 licensed to preach by the East Fork of Bull Creek Baptist Church. Soon he became well known in Madison and other nearby counties as both evangelist and pastor. At the age of twenty-seven, by which time he had a wife and three children, Ammons entered Mars Hill College as a student. Two years later, at the Burnsville Academy in Yancey County, he launched a career as a schoolmaster. During the Civil War Ammons served as a missionary to Confederate troops in Western North Carolina and taught in various schools. From 1866 until 1868 he was president of Mars Hill College, a position made especially difficult from the fact that both sides in the recent war were well represented in the student body. His report to the Western Baptist Convention in 1867 declared that the institution, with an enrollment surpassing one hundred, was prospering.

From Mars Hill, Ammons moved to his small, recently purchased farm at Morgan Hill in Buncombe County. Though continuing to do some teaching and farming, he became largely engaged in his work as pastor, serving more than twenty churches during the next three decades. Before the close of this period he returned to Madison, where he was for a short time county superintendent of public instruction. He held other positions, including an appointment by the Sunday School Association (Raleigh) as Sunday school missionary in Western North Carolina and election by the Western Baptist Convention as corresponding secretary of its mission board. His public debates with representatives of the Campbellite Christian and Methodist denominations attracted considerable attention and were a particular source of pleasure to Ammons. Contemporary Baptists in Western North Carolina "had come to regard him as the greatest exponent of their faith."

Previously a Democrat, Ammons was caught up in the political upheaval of the 1890s and changed his party affiliation to Fusionist. He became chairman of the 1894 Populist convention of the Ninth Congressional District and the party's candidate for the state senate. The Democratic Asheville Daily Citizen made merry over an opposition ticket consisting of Republican James M. Moody, a "Haywood Radical," and Populist Ammons, a "Madison Minister." There were references to "Profane and Dirty Utterances" in the convention that selected them. Ammons was quoted as saying that he "had been born in a Democratic family, nursed at a Democratic breast, rocked in a Democratic gum [cradles were unknown then] and for more than 40 years had voted the straight Democratic ticket. But once he had made up his mind to change, all the powers of the eternal pit could not swerve him." A Citizen reporter referred to Spring Creek as the home of Jeter C. Pritchard and "the burial place of the Rev. Ammons." Despite such dire predictions, Ammons and Moody were elected, even though by small majorities, and represented the Thirty-third Senatorial District in the 1895 legislature. Ammons's recorded votes were all with the Fusionist majority.

Although respected in Baptist circles throughout his long period of service, Ammons was not always popular. A recent writer points out that he tended to be "long-winded, intolerant toward those who opposed him, and somewhat bitter toward younger men who had supplanted him." Frequent long absences from home helped limit his effectiveness as a farmer and were an imposition on his family. A contemporary wrote of Ammons, "The small remuneration that he received from his churches deprived his children, to a very great extent, from being educated. He seemed almost a stranger to his children."

Sallie E. Jervis, whom he had married in 1850, survived him. Ammons was buried at Gabriel's Creek Baptist Church burying ground near his home. His Outlines of History contains a reproduction of his portrait.

Minutes of the One Hundred and Eighth Annual Session of the French Broad Baptist Association, 1915.

Outlines of history of French Broad Association and Mars Hill College : from the organization of the association in 1807 to 1907, being a period of 100 year by John Ammons, WorldCat: https://www.worldcat.org/oclc/46927615

The First Campus Building of Mars Hill College, where Ammons was a student, and later served as president from 1866-1868. Image courtesy of Mars Hill University. Availabe from http://www.mhu.edu/about-mhu/history-of-the-university (accessed May 7, 2014).