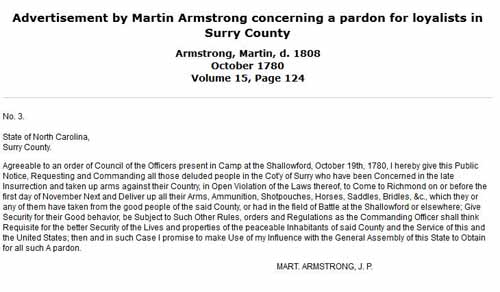 Martin Armstrong, Revolutionary War soldier, surveyor, and politician, was born in Augusta County, Va., the fourth son of James and Jean Armstrong, previously of Lancaster County, Pa. About 1750, the Armstrongs moved from Virginia to Anson County, N.C., and settled on the banks of the Catawba River. In time, the family spread south, but Martin Armstrong settled in Surry County, where more than fifty land patents were issued in his name. Land speculation, furthered by his craft as a surveyor, seems to have been his main activity.

In 1770 he was appointed commissioner to run the dividing line between Rowan and the new county of Surry and to lay out and sell lots for building the town of Richmond. Rival factions had struggled over the location of the county seat; the Armstrong brothers, Martin and John, eventually won through unscrupulous maneuvers. Later, when the town of Clarksville in Davidson County was formed, Martin Armstrong was appointed to lay it out. Both towns were situated on land owned by either Martin or John Armstrong, whose careers in politics, soldiering, and land-dealing were strikingly parallel.

In 1782, noticing that accelerated settlement in the region beyond the mountains was preempting the most desirable land in an area the state had intended for use as bounty land payments for Revolutionary War service, Armstrong wrote to General Jethro Sumner to urge that steps be taken to secure the area for bounty land. As a result, Armstrong was appointed entry taker and surveyor of the military lands and put in charge of an office in Nashville (Tennessee then being a part of North Carolina). At the same time, his brother John was made entry taker for lands in eastern Tennessee, a powerful combination of strategic positions that led to abuses and fraud.

On a tip from Andrew Jackson, Governor Samuel Ashe of North Carolina forced an investigation into the land office operations and found proof of extensive frauds in which not only the Armstrongs but also others of higher office and greater repute were implicated. Though desperate measures (fire and theft) were plotted to prevent discovery of the frauds, they were uncovered in time to thwart the destruction of the records holding the proof. Despite evidence of criminal action, no trial or conviction ever took place, presumably because Governor John Sevier of the newly created State of Tennessee was himself implicated and refused to extradite the other men involved.

Martin Armstrong was relieved of his appointment by an act of the North Carolina legislature, though he stoutly maintained his innocence of any wrongdoing and refused to relinquish the records of his office, a stand that was heartily endorsed by the government of Tennessee, where he ended his career as surveyor general of the state.

While land was Martin Armstrong's livelihood, he wielded power in both the local militia and politics. He was appointed colonel of the Surry Militia in 1776 at the outbreak of the Revolutionary War, but he had already gained military experience as an Indian fighter on both the Virginia and North Carolina frontiers. In 1773 he had raised troops to aid the settlers then being harassed by the Indians at the instigation of the British government. He was sent to General Griffith Rutherford's aid in 1776 to fight the Cherokees. His final military action came at the Battle of Kings Mountain, where he marched his regiment to oppose Colonel Patrick Ferguson instead of joining General Horatio Gates as he had been ordered. After the battle, on his own initiative, he released or allowed to escape some five hundred prisoners of war, frustrating General Nathanael Greene's plan to exchange them for Americans captured by the British, including General Rutherford.

Because of these actions, parts of a pattern of insubordination, Martin Armstrong was stripped of his command in 1781. He nevertheless maintained his position in the local militia and ended his military career as a brigadier general of the Eighth Brigade of North Carolina Militia.

As a power in the local government of Surry County, he held a variety of public offices: justice of the peace, sheriff, tax collector, delegate to the provincial congress of 1775, and senator for Surry in 1783; finally, despite dishonor in both military and governmental service, he was in 1779 once more returned to the General Assembly to represent Surry County.

Thomas P. Abernethy, From Frontier to Plantation in Tennessee (1932).