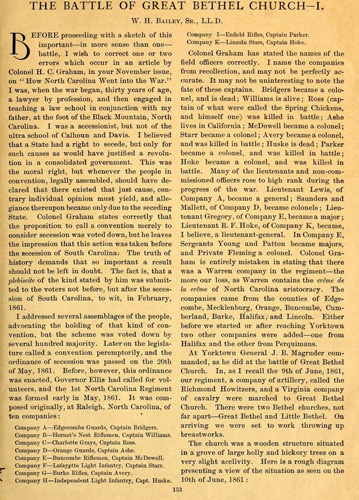 William Henry Bailey, lawyer, attorney general, code commissioner, county attorney, and state representative, was born at Mt. Pleasant on Little River, Pasquotank County, the son of Judge John Lancaster and Priscilla Brownrigg Bailey. In the early 1840s the family moved to Hillsborough, where the elder Bailey began the practice of law. The son attended William Bingham's school and Caldwell Institute in Hillsborough and was licensed by the county court in 1851 to practice law. He joined his father's firm briefly but moved to Yanceyville in 1852. There, on 20 Oct. of that year, he was married to Annie Chamberlayne Howerton. In December 1856 he was appointed attorney general of the state to fill an unexpired term extending through 1857. He was elected county attorney for Caswell County in 1858, but in 1860 he removed to Black Mountain and taught law there briefly. On 24 Apr. 1861, he enlisted for six months as a private in the Bethel Regiment, First North Carolina Volunteers. He later returned to his law practice and toward the end of the war moved to Salisbury, where he joined the firm of Boyden and Blackman. In 1870 he moved to Charlotte and formed a partnership with Judge William M. Shipp.

Bailey was made code commissioner of North Carolina in August 1870 and served until the commission was abolished in 1873. In 1882 he was elected to the state house of representatives from Mecklenburg County and appointed to the Judiciary Committee. In the legislature, he was considered a liberal and an independent, although he most often voted Democratic.

Bailey was noted as a humorist and played the banjo. An active Mason, he was master of Eagle Lodge No. 71 and of Fulton Lodge No. 99. In 1885, Rutherford College bestowed upon him the LL.D. degree.

He was the author of a number of books and articles, including The Effect of the Civil War upon the Rights of Persons and Property (1867); The Onus Probandi, Preparation for Trial and the Right to Open and Conclude (1868); "Provincial Reminiscences of Colonel Benjamin Hill, . . . , John Campbell, . . . , Joseph Montfort, . . . , the Montfort Family and Alexander McCulloch" (1889–90); "The State of Religion in the Province of North Carolina" (1890); "Battle of Great Bethel Church" (1895); The Detective Faculty, As Illustrated from Judicial Records and the Actualities of Experience (1896); "The Regulators of North Carolina" (1895, 1896); and The Genealogy of the Latham, Hill, Montford, Littlejohn, McCulloch, Campbell and Brownrigg Families (1899). He was also editor of Fifth North Carolina Digest (1897), a continuation of W. H. Battle's Digest (1866).

Bailey removed to Houston, Texas, in 1891, where he spent the remainder of his life.