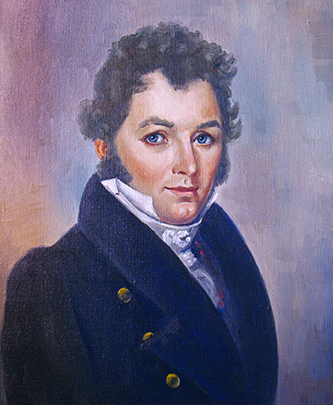 Samuel Price Carson, congressman and secretary of state of Texas, was born at Pleasant Gardens, Burke County, the eldest son of John Carson and his second wife. His father represented Burke in the state legislature, as did three of his sons. Samuel Price was educated at home, engaged in agricultural pursuits as a young man, and served in the state senate from 1822 to 1824.

In August of 1825, Carson, as a Jackson-Calhoun supporter, won election to Congress over Robert Vance and James Graham in the Buncombe District. On Capitol Hill he formed lasting friendships with Samuel Houston, James K. Polk, and Warren R. Davis. He served first on the Indian Affairs and later on the Naval Affairs committees. He was a defender of states' rights and a strict constructionist and was opposed to national banks, internal improvements, and tariffs. He disapproved of John Quincy Adams and in time denounced Jackson as well. In 1832 he was a partisan of Philip Barbour. In 1827, Robert Vance tried to regain his old seat from Carson in a bitter campaign that resulted in a duel and the death of Vance. In the next two elections, Carson suffered no real competition, but by 1833 his determined Nullification views brought both National Republican James Graham and Democrat David Newland into the contest against him. He lost to James Graham by 870 votes, after serving in Congress four terms. While in Congress he married Catherine Wilson of Tennessee; they became the parents of one daughter.

Back home, Carson was again a member of the state senate in 1834, but early the following year he made a trip to Mississippi and Texas to survey the possibilities of moving west. He and a brother were delegates in the North Carolina Constitutional Convention of 1835. He opposed restrictions on Catholics holding office, was against allowing free blacks the vote, and wanted popular elections for governor. At the end of the convention he let it be known that he was moving to Texas.

Texas declared its independence from Mexico a short time after Carson settled there, and he was elected to represent the Red River District in a constitutional convention. There his former friendship with Houston and his congressional experience gave him prestige. He missed election as ad interim president by just six votes and was made provisional secretary of state of the fledgling republic, serving from March to October 1836. During that summer he made a trip to Washington to solicit support for Texas from his old friends in Congress. In June and July, Congress voted to recognize the independence of Texas.

Already in ill health, Carson found his new exertions too strenuous. He eventually went to Hot Springs, Ark., in search of a cure. There he died and was buried in the government cemetery.