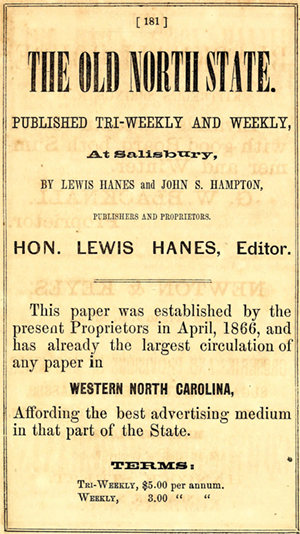 Lewis Hanes, newspaper editor, was born in Forsyth County but spent most of his life in Davidson County. In addition to his work as a journalist, Hanes was active in politics. He was a Whig member of the House of Commons from Davidson County in 1860 and again for the term 1864–65. An opponent of secession and war, in 1863 he prepared a series of able articles against the war for the North Carolina Standard, published by W. W. Holden in Raleigh. These letters, signed "Davidson," attracted wide attention and were a force in the peace movement. Hanes was briefly private secretary to Governor Holden in 1865, but quickly found himself in the wrong camp. Although Holden's staunch ally during the peace movement, Hanes noted the governor's penchant for building his own political machine and resigned. In the fall of 1865 Hanes was elected to Congress; however, he failed to secure the removal of disabilities (imposed on many former Confederates which made them ineligible to vote) and was not seated.

In 1866 Hanes moved to Salisbury, where he began to publish the Old North State, an independent organ in opposition to the Carolina Watchman, a Conservative newspaper published by John J. Bruner. In 1868 the Watchman and the Old North State combined, with Hanes taking charge of the editorial department and Bruner of the job shop. Hanes later stated that he established the journal as an independent paper, and it remained such except for a brief period from February to November 1868. During that time, he sided with the Conservatives in an attempt to defeat the constitution of 1868, which was, nevertheless, adopted. For his efforts he was elected a member of the national executive committee of the Democratic party but declined to accept.

After this Hanes remained in Salisbury only a short time and put his newspaper up for sale. Bruner purchased it, ceased publication, and immediately reissued the Carolina Watchman on 15 Sept. 1871. Hanes was then engaged as a political writer for the Raleigh Era, an organ of the Republican party which he, with Marcus Erwin, produced in an able and dignified manner. After six months he withdrew because of an argument with the paper's owners, who wanted him to defend a corrupt and radical judge whom the Democrats were attacking. When he resigned in March 1872, his former partner, John J. Bruner, commented that Hanes was too good for the radicals and that "he is the only man in the state that has rapport with decent people in the Republican party."

Hanes returned to Salisbury to practice law with W. H. Bailey, a former law partner of Nathaniel Boyden who had recently been appointed an associate justice of the North Carolina Supreme Court. While there, Hanes became a member of St. Luke's Episcopal Church and served on its vestry. He did not long remain in Salisbury but left to engage in newspaper work over the state. In 1880, he was elected to the North Carolina Senate from Davidson County and served until his death. He also was made a trustee of The University of North Carolina.

A complex character, Hanes apparently supported both political parties during the unsettled days following the war, but whether on the Democratic or Republican side he was always a conservative. While editing the Old North State he was asked in 1871 to testify before a congressional committee inquiring into Ku Klux Klan activity in Rowan County. His testimony absolved Rowan from any involvement in the Klan and convinced the investigators that elections were as peaceful in Rowan as in any northern community.

On 29 May 1848 Hanes married Mary C. Eccles in Davidson County. They were the parents of four children. He died at his home near Clemmonsville at age fifty-six. His former partner in the Carolina Watchman said of him: "He was a Christian gentleman who sought to know the truth and adhered to it when he believed he found it."

John Nichols, Directory of the General Assembly of the State of North Carolina (1860).