Hardie Hogan Helper, abolitionist, Union soldier, journalist, and moderate Republican Reconstruction leader, was born two miles west of Mocksville, the son of Daniel J. and Sarah Brown Helper. He probably attended the Mocksville Academy on Salisbury Street and may have been taught by the Reverend Baxter Clegg and Peter Stuart Ney at the Mocksville Academy on Depot Street. Helper became a member of the Whig party, and in 1850 went to Washington, D.C., to work for the Navy Department. Returning to Salisbury, he was clerk of the Superior Court of Rowan County in 1855.

Helper was a brother of Hinton Rowan Helper, author of the highly controversial abolitionist volume, The Impending Crisis of the South: How to Meet It, published in New York in June 1857. Sometime after its publication, H. H. Helper moved to Illinois; extant records imply that he left North Carolina involuntarily because of the hatred generated by his brother's book.

During the Civil War Helper fought with the Union armies in North Carolina and Florida. While assigned to the staff of General A. E. Burnside, he incurred some disability; this may have taken place when he was involved in an attempt to blow up a railroad bridge across the Trent River in eastern North Carolina. In 1888 a Senate committee recommended Helper for a pension for "the disability as though he was at that time actually enlisted in the Federal Army." After about 1880 he was in very poor health. In his writings to Lyman C. Draper, concerning the Boone family and the Squire Boone homesite (Helper's birthplace), he blamed his failing health on his military service.

A staunch Republican, Helper became deeply involved in Reconstruction in North Carolina both as a candidate for political office and as an outspoken newspaper editor. He was a federal tax assessor for the Sixth Congressional District from about 1865 until about 1870 and the postmaster of Salisbury for several months in 1871. An account of his death, written by his son and published in the Baltimore Sun, states that President Andrew Johnson once asked him to submit a plan for readmitting the Confederate states to the Union. According to this account, the plan submitted was a very moderate one but did provide for limited African American suffrage. In 1870 Helper was an unsuccessful candidate for Congress. He advocated complete universal amnesty, limited African American suffrage, equal distribution of the proceeds from the sale of western land, protective tariffs, industrial development in the South, and several other reform proposals. During the campaign, he strongly emphasized that he was a "Conservative Republican."

In the late 1860s Helper was co-publisher and editor of the Raleigh Register, and for a time was its publisher and editor. In 1868, while holding the latter position, he also published a political paper, The Holden Record, devoted to scathing attacks on W. W. Holden, Republican leader and governor associated with radical Reconstruction policies and measures in the state. By 1870 Helper had broken completely with the Radical Republicans in Rowan County and North Carolina, denouncing their leaders as "incompetent and worthless . . . for the most part pestiferous ulcers feeding upon the body politic." He blamed the rapid spread of the Ku Klux Klan on the changes forced upon the South by the Radicals. James S. Brawley, in The Rowan Story, states that this opposition by a liberal, reform-minded Republican cost Helper his job as postmaster of Salisbury. In 1872, in Salisbury, Helper edited and published for a while the weekly Tribune, which strongly supported the Republican presidential candidate Horace Greeley and the liberal reform wing of the Republican party opposing Grant's reelection. 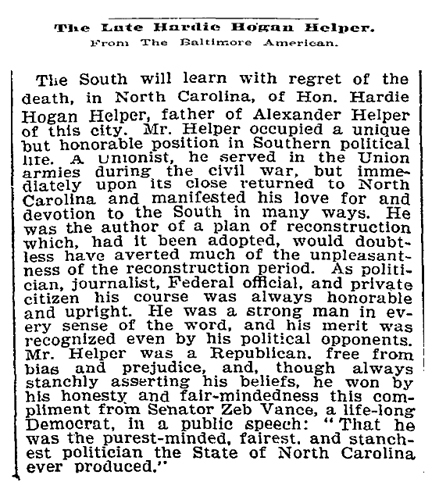 ing that the Southern African American should return to Africa, Helper became involved in the work of the American Colonization Society. He maintained that the African American and the working-class white were "in each other's way" to progress, and that the African American presence stymied the South's overall development just as slavery had. Helper corresponded at length with the colonization society and in an interview with the editor of the Davie Times, 17 Aug. 1883, declared his intention to "raise a colony—one family from each of the ex-slave states . . . not less than seventy-five souls . . . by and through his own efforts and accompany the said colony into the highlands of Liberia in Africa." Nothing further is known about this proposal.

On 16 May 1848 Helper married Elizabeth Long. His second wife was Anna Selena Folk. By these marriages he had two sons, Alexander and Daniel Ott, and one daughter, Mattie. Helper spent his last years on the small farm site that had been his birthplace. He was buried at Center United Methodist Church in Davie County.

Helper, Hinton Rowan. The impending crisis of the South: how to meet it. New York: A.B. Burdick. 1860. https://archive.org/details/impendingcrisiso00help (accessed December 31, 2013).