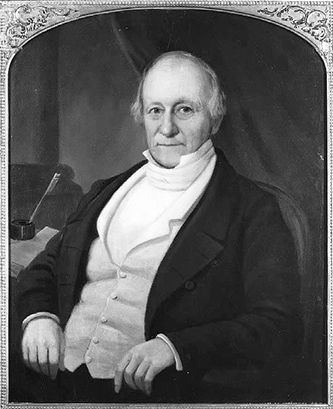 James Iredell, Jr., U.S. senator, North Carolina governor, general of state militia, and Superior Court judge, was born in Edenton. His father was James Iredell, Sr., well-known jurist and member of the first Supreme Court of the United States; his mother was Hannah Johnston, of Edenton, the daughter of Samuel Johnston, Sr., of Onslow County and the niece of royal Governor Gabriel Johnston. James, Jr., attended Edenton Academy, was graduated from Princeton University in 1806, studied law, and was admitted to the North Carolina bar in 1809. He was captain of a company of North Carolina volunteers who were active in the defense of Norfolk in the War of 1812. The following year he served as solicitor of the First Circuit Court.

Perhaps much of Iredell's claim to fame was as the son of his illustrious father, who was active in colonial and early state government prior to his appointment to the United States Supreme Court by President George Washington. His uncle and mentor, Samuel Johnston, was equally active in the early history of the colony and state, particularly in the organization of the Revolutionary government and the Continental Congress and later as governor and member of the U.S. Senate. Johnston sponsored his nephew's education at Princeton. The younger Iredell's term as governor was too brief for any outstanding accomplishments. In addressing the General Assembly after his election, he proposed continuation of the program of former governors in emphasizing internal improvements and the development of educational facilities. Joseph Caldwell's Numbers of Carlton envisioned a program of railroad expansion to open the western section of the state, providing transportation for the products of that region to a North Carolina port and foreign markets. Iredell suggested the construction of a trial road from Campbellton to Fayetteville.

Iredell did not seek reelection to the U.S. Senate after completing Macon's term. Instead, he returned to North Carolina and moved to Raleigh to practice law. In 1836–37 he was a commissioner to revise the state laws, and from 1840 to 1852 he was a reporter for the North Carolina Supreme Court. He prepared a Digest of All the Reported Cases Determined in the Courts of North Carolina, from the Year 1778 to the Year 1845, published in three volumes in Raleigh between 1839 and 1846.

Iredell's wife was the daughter of Samuel Treadwell, collector of the Port of Edenton. They were the parents of seven children: Frances, Penelope, Annie, Jane, James, Helen, and Samuel. Iredell died in Edenton and was buried in the Johnston family cemetery at Hayes Plantation in Edenton.