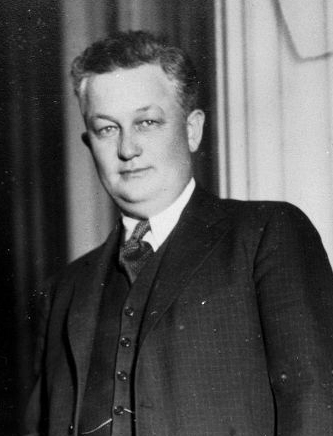 Robert Grady Johnson, lawyer, legislator, and politician, was born in Burgaw, the son of Joab F. and Myrtie Grady Johnson. He was graduated from Burgaw High School in 1913 and studied law at The University of North Carolina in 1914–15. From 1919 to 1925 he was assistant cashier of the Bank of Pender. In 1926, he studied law at Wake Forest College and was admitted to the bar.

Elected state senator from the Ninth District in 1929, Johnson represented Pender County in the General Assembly of 1931, 1933, and 1935, and was elected speaker of the state house of representatives in 1935. He served as secretary of the North Carolina Petroleum Industries Committee from January 1936 to September 1937. In May 1937 he was appointed a member of the state Highway and Public Works Commission, which elected him director of the state prisons. Serving in the latter post until 1941, Johnson introduced a system placing more emphasis on pleasant physical surroundings for prisoners, recreation, and prison industries. In 1941 he was chairman of the Alcoholic Beverage Control Board, and from 1942 to 1950 he was a member of the Utilities Commission. At various times Johnson also served on the board of trustees of The University of North Carolina, as register of deeds of Pender County, and as a member of the Pender County and state Democratic executive committees.

During World War I Johnson enlisted in the army as a private and served as a medical records clerk. He was a member of the American Legion and an active Mason. Johnson married Mrs. Louise White Freeman of Elizabeth City and they were the parents of three children: Louise Grady, Robert White, and Marion Lee. He was buried in Burgaw.

"N_2008_11_3  Robert Grady Johnson possibly during the time he served as NC Speaker of the House in 1935." Photograph. Circa 1935. Image courtesy of the State Archives of North Carolina.