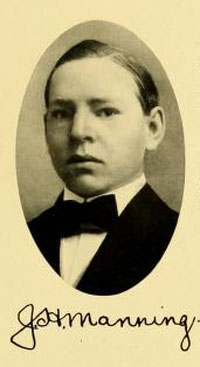 John Hall Manning, lawyer and government official, was born in Durham County, the son of Julia Tate Cain and James Smith Manning, who served as attorney general of North Carolina and later as a justice of the state supreme court. Young Manning attended the Durham public schools and received A.B. (1909) and LL.B. (1913) degrees from The University of North Carolina. He taught school in Oxford (1909–10) and Durham (1910–11) before becoming a football coach at Stetson University in De Land, Fla. (1911–12). In 1913 he joined an infantry unit of the North Carolina National Guard as a private but was soon made a first lieutenant. He served along the Mexican border at the time of the raids into U.S. territory conducted by Mexican insurgent Pancho Villa. In World War I he was an intelligence and operations officer of a unit that broke through the Hindenburg Line. Near the end of the war he commanded the Third Battalion of the 119th Infantry. After the war he was made a lieutenant colonel and became the executive officer of the First Infantry unit of the North Carolina National Guard. In 1937 he was promoted to colonel and placed in command of the unit.

When the National Guard was activated in 1940, Manning was placed in command and remained in that position for two years. During World War II he served in the European theater, receiving the Legion of Merit for his performance as commander of a replacement depot in Italy. In 1946 Governor R. Gregg Cherry called upon Manning to assist in reorganizing the North Carolina National Guard. Cherry later appointed Manning commander of the Thirtieth Infantry Division with the rank of major general. In 1951 Governor W. Kerr Scott named Manning adjutant general of North Carolina, a post that he held until replaced by Capus Waynick on 7 July 1957. Manning retired with the rank of lieutenant general.

On 23 Nov. 1920 Manning married Jane Stillman, and they became the parents of two children: Richard de Yarman and Jane Stillman (Mrs. Charles A. McKenney, Jr.). Manning died at his home in Raleigh following a heart attack. A memorial service was held at St. Michael's Episcopal Church, Raleigh, and burial was in the National Cemetery, Raleigh. Manning was an Episcopalian, a Mason, and a Democrat.