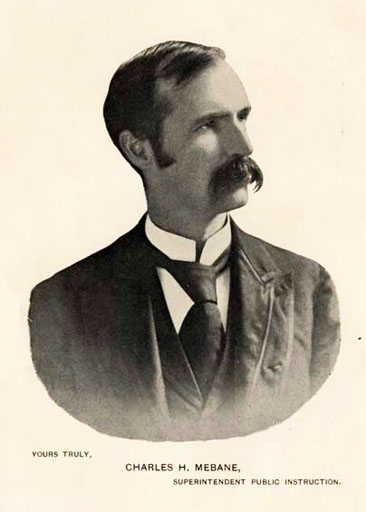 Charles Harden Mebane, lawyer and educator, was born in Guilford County, the son of William Milton and Margaret Jane Harden Mebane. Educated in the common schools of Guilford County, he taught school for six years to earn money to attend college. In 1892 he was graduated from Catawba College at Newton, then joined the faculty. A Republican, he ran on the Fusion ticket in 1896 for the office of superintendent of public instruction and was elected. The first experienced schoolteacher to hold the post, he served from 1897 to 1901 but was defeated for reelection in 1900.

Putting aside party politics and with wide newspaper support, Superintendent Mebane undertook to improve educational facilities in the state. Under his leadership, the General Assembly passed a law to encourage local taxation for schools and made an appropriation for those counties that provided for such taxation. He further suggested that railroads should be taxed as a means of raising a substantial amount of money to support education. Mebane also advocated strict qualifications for both teachers and members of local school committees. He proposed higher standards for the education of prospective black teachers and the adoption of text-books by a board of examiners rather than by local committees. Compulsory school attendance, he stressed, should become a state policy. Finally, in numerous ways he attempted to remove the question of public education from partisan politics.

Mebane also published two biennial reports containing information on current work, plans for the future, and historical information, some prepared by Professor Kemp P. Battle of The University of North Carolina. In some respects he laid the foundations on which his successor, Charles F. Toon, under the leadership of Governor Charles B. Aycock, would build. At the end of his term of office, Mebane became president of Catawba College, remaining in that post until 1904, when he became superintendent of the Catawba County schools. As this was not a position that occupied him full time, during the term 1904–5 he studied law at The University of North Carolina. He was licensed to practice in 1906. With this training, he served as judge of the Catawba County Recorder's Court in 1914 and 1915.

Clearly a man of diverse talents, Mebane purchased the Catawba County News in 1903 and soon became its editor. Later consolidated with the Newton Enterprise, the paper became the News-Enterprise, which Mebane edited until shortly before his death. In 1917 he was one of the directors of the Anti-saloon League in North Carolina and state director of the prohibition drive. For the last thirty years of his life, he served as a trustee of the North Carolina College for Women.

In 1894 Mebane married Minnie Cochrane of Newton. He was survived by his wife and six children: Charles H., Jr., William, Mrs. G. W. Mann, Mrs. C. W. Rothrock, Elizabeth, and Evelyn. While a student at Catawba College, Mebane became an admirer of Dr. J. C. Clapp, president of the college and active in the German Reformed church, of which Mebane became a member.