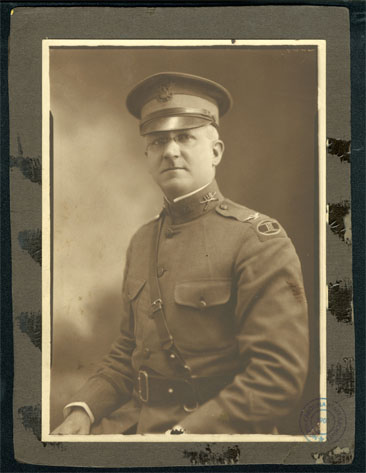 John Van Bokkelen Metts, military officer, was born in Wilmington, the son of Captain James I. and Cornelia Cowan Metts. He attended the Tileston Normal School and then Cape Fear Academy in Wilmington until age sixteen; later he took army extension courses. Metts spent two years in the wholesale grain business with his father before joining the Walker Taylor Insurance Company in Wilmington. After five years he sold his interest in that firm and established his own general insurance business. During this period his principal hobby was the National Guard. In 1894 he enlisted in the Wilmington Light Infantry (later a part of the National Guard) as a private, rising through the ranks to captain in 1903 and lieutenant colonel in 1907. He was also active in civic affairs and at one time served on the New Hanover County Board of Commissioners.

Metts was called into active federal service in June 1916 and served on the Mexican border, where he was commissioned colonel in 1917. Afterwards his regiment trained at Camp Sevier, S.C. At this time he sold his Wilmington business, as it appeared he would be in the army for an indefinite period. While Metts was at Camp Sevier, the 30th Division was organized and his regiment became the 119th Infantry of the 60th Brigade. He commanded his regiment throughout World War I, participating in three major operations: the Ypres defense sector, Ypres-Lye offensive, and Somme offensive. For this service he was awarded the Distinguished Service Medal, receiving special recognition for the combat action of his regiment in breaking the Hindenburg Line in September 1918.

When the 119th was demobilized, Colonel Metts continued in active service with the Operations Branch, War Department, General Staff, and as commanding officer of the Panama Replacement Depot at Jackson Barracks, New Orleans. There he left federal service to become adjutant general of North Carolina under Governor Thomas W. Bickett. Metts moved to Raleigh in 1920 and resided there until his death.

As adjutant general, his first duty was to reorganize the National Guard. "This tremendous undertaking was carried forward by General Metts with energy, determination and sound judgment, producing exceptionally satisfactory results." In June 1926 he also assumed command of the 60th Brigade, 30th Division, as a brigadier general of the line, a post he held until 1936. When the Works Progress Administration was created, he saw the opportunity to obtain National Guard armories and provide suitable housing facilities for many of his units. With no funds at his disposal, he was able to have plans and specifications prepared, and with the cooperation of local authorities he was responsible for the construction of twenty-eight armories.

Metts believed that the efficiency of the National Guard was due largely to the fact that politics was kept out of it. He frequently said: "You cannot mix politics with the military service and maintain discipline and efficiency."

In addition to his duties as adjutant general, Metts in 1940 was appointed state director of selective service by the president on the recommendation of Governor Clyde R. Hoey; he served throughout World War II in this capacity. When the entire National Guard entered into active federal service, he began to organize the North Carolina State Guard as a protective force for the state. When the war was over, he had the monumental task of reorganizing the National Guard for the second time. In 1949 he was promoted to the rank of major general. After serving the state as adjutant general for thirty-one years, under nine governors, he resigned on 31 July 1951.

During his military career, Metts was president of the Adjutants Generals Association of the United States and served on the executive council and several standing committees of the National Guard of the United States. He was a recipient of the Medal for Merit for Selective Service, awarded by President Harry S Truman; the North Carolina Daughters of Confederacy Medal to an outstanding son of a Confederate veteran; the Distinguished Service Medal of the National Guard Association of the United States (1955); and the North Carolina Distinguished Service Medal (1956).

In 1906 he married Josephine Budd of Petersburg, Va. They had two children, Josephine Budd Metts Huntt and John Van B., Jr., both of whom remained in the Wilmington area. Metts was buried in Oakdale Cemetery, Wilmington.