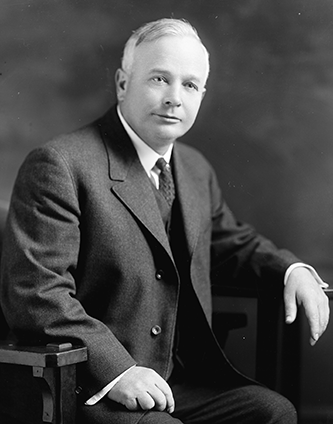 Thomas Walter Bickett, attorney general (1909–17) and governor (1917–21) of North Carolina, was born in Monroe, the eldest of four children of Thomas Winchester and Mary Covington Bickett. His father, a druggist, died when Thomas Walter was thirteen years old.

After being graduated from Wake Forest College in 1890, Bickett taught in the public schools for two years, first in Marion and later in Winston-Salem. He studied law at The University of North Carolina in the fall of 1892 and in February of the following year was admitted to the bar. He practiced briefly in Monroe and in Danbury before moving in 1895 to Louisburg, where he soon became the senior partner in the firm of Bickett, White, & Malone.

Bickett, a Democrat, first held public office in 1907 as a member of the state house of representatives, to which he was elected by the voters of Franklin County in the general election of 1906. Probably the most reformminded General Assembly of the progressive era, the 1907 legislature enacted a substantial body of progressive legislation. A very humane man, Bickett was largely instrumental in securing passage of a bill to enlarge and improve the state's facilities for treatment of the mentally defective. He was also a staunch supporter of the bill to establish the East Carolina Teachers' Training School.

At the 1908 Democratic State Convention, Bickett won widespread recognition for a forceful speech nominating Ashley Horne for the governorship. Horne lost the nomination, but Bickett, in part at least because of his speech, was nominated for the post of attorney general. Bickett was twice elected attorney general, first in 1908 and again in 1912, and in that capacity ably defended the state's interests in cases appealed to the U.S. Supreme Court. In frequent demand as a public speaker, he emerged during his second term as a likely prospect for the gubernatorial nomination in 1916.

In the 1916 Democratic gubernatorial primary, the first such contest since enactment of the state-wide primary law in 1915, Bickett polled 63, 121 votes to E. L. Daughtridge's 37,017; he subsequently defeated Frank A. Linney, the Republican candidate, in the general election. Inaugurated governor on 11 Jan. 1917, he was in office less than three months before the United States entered World War I.

As wartime governor, Bickett cooperated fully with the national authorities during the crisis of 1917–18. In various public statements, he defended America's entry into the war, explained the operation of the federal draft law, and encouraged North Carolinians to fulfill their patriotic duty by supporting the Liberty Loan drives. On one notable occasion in June 1918, he traveled to mountainous Ashe County and personally persuaded some army deserters and draft dodgers, who had banded together and absconded to the hills, to surrender themselves to the authorities. In so doing, he rejected the advice of the state's adjutant general, who had recommended the use of force to subdue the defiant mountaineers.

During his governorship, Bickett proved to be a modest reformer. Many of his achievements foreshadowed those of his immediate successors—Cameron Morrison (1921–25), Angus W. McLean (1925–29), and O. Max Gardner (1929–33)—during whose administrations North Carolina achieved a nation-wide reputation as the most progressive state in the South. In his messages to the General Assemblies of 1917 and 1919 and to the special session of 1920, Bickett made numerous legislative recommendations, most of which ultimately were enacted into law.

From the very outset of his administration, Bickett manifested a special desire to improve the quality of rural life in the state. At his behest, the General Assembly of 1917 enacted several measures with this purpose in mind, among them acts to encourage the teaching of agriculture and home economics in the rural schools and to limit the amount of interest landlords could charge for extending supplies or credit under the crop-lien system.

In response to Bickett's appeals, the legislature expanded the duties of both the state board of health and the board of charities and public welfare, previously known as the board of public charities. In the area of public education, the General Assembly increased the minimum school term from four to six months, inaugurated a state-wide teacher-certification program, substantially increased teachers' salaries, and authorized a half-million dollar state bond issue to assist counties in the construction of new schoolhouses. Perhaps one of Bickett's most significant contributions to educational progress in the state was his selection in 1918 of the able Eugene Clyde Brooks as state superintendent of public instruction. Despite the state's traditional hostility to large bonded debts, the 1917 General Assembly approved, with Bickett's endorsement, a $3 million bond issue to finance a six-year expansion program at the state's institutions of higher learning and hospitals for the mentally and physically defective. According to Harry Woodburn Chase, president of The University of North Carolina in the 1920s, this authorization marked the "turning point" in the state's attitude toward institutional financing.

One of the most enduring legacies of the Bickett administration was in tax reform. As early as 1913, Bickett, then attorney general, had advocated revisions in the state's cumbersome revenue structure. The reforms adopted during his term as governor were incorporated in the Revaluation Act of 1919 and the Revenue Act of 1920, by the terms of which all property in the state, both real and personal, was reassessed under state supervision according to uniform standards of valuation. More significantly, however, the acts stipulated that thereafter the state government was to derive its revenue, other than that supporting the school fund, from income, inheritance, franchise, and license taxes and to relinquish to the counties the exclusive right to tax property. These and related tax reform measures modernized the state's revenue structure and provided for a more equitable distribution of the tax burden. 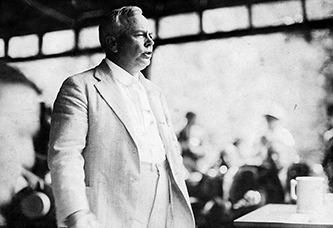 During the Bickett administration the good roads movement in the state reached its peak. By 1919 the good roads enthusiasts, organized into several state-wide associations, were demanding a multimillion dollar highway expansion program, to be financed through the sale of state bonds. Unlike his immediate successor, Cameron Morrison, who enthusiastically championed a costly highway program, Bickett was opposed to the issuance of large quantities of road bonds. No spectacular construction program was approved during his term as governor. But the state highway commission, until then largely an advisory body, was reorganized and its duties enlarged. Bickett's 1919 selection of Frank Page as chairman of the commission proved to be one of his wisest appointments.

Bickett's oft-expressed concern for the lot of the oppressed and disadvantaged among the state's population, the tenant farmers, blacks, and prison inmates, marked him as a man of humane disposition. Although some modest prison reform measures were adopted by the state at his instigation, prison conditions in North Carolina still were substandard at the end of his administration in 1921. Bickett's concern for the well-being of prison inmates, as well as his sense of justice, caused him to adopt what many citizens in the state regarded as an excessively lenient pardon policy. To his credit, he was probably the first governor in the state's history to confront a mob bent on lynching a prisoner held in a county court house and to persuade it to disperse.

While a traditionalist in his attitude toward race relations, Bickett nonetheless manifested a sympathy for the lot of the blacks uncommon among southern politicians of his time. He paroled or pardoned some four hundred black prisoners, supported increased spending for black education, and made recommendations to the General Assembly that resulted ultimately in the establishment of a sanatorium for black tuberculars and a reformatory for black delinquent boys. On at least one occasion he denounced as "sinful" the racist pronouncements of the Loyal Order of Klansmen. "The South needs good and brave governors such as . . . Bickett," declared the Norfolk (Va.) Journal and Guide, a black newspaper, in 1921.

Upon his retirement as governor in January 1921, Bickett purchased a home in Raleigh and formed a law partnership with Attorney General James S. Manning and Garland S. Ferguson, Jr. On 27 Dec. 1921, less than a year after leaving office, he suffered a stroke. He died the following day at the age of fifty-two and was buried in Louisburg.