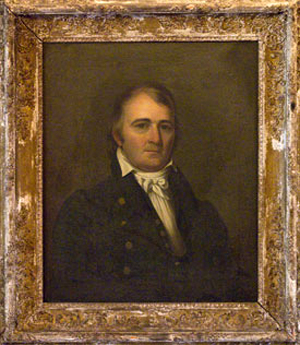 Hardy Murfree, Patriot and state official, was born at Murfree's Landing (now Murfreesboro), the son of William and Mary Moore Murfree. As an officer in the North Carolina Continentals during the Revolutionary War, Murfree won acclaim by leading a column of infantry in a successful attack on Stony Point, a British bastion on the Hudson River. Throughout the war he was a valuable soldier, serving as major and then lieutenant colonel.

After the war he was appointed state inspector of revenue and commissioner of confiscated property in the Edenton District. His interest in internal improvements led to service with a commission to promote the opening of Nag's Head Inlet and to his efforts to have a canal cut from the Roanoke to the Meherrin River. In 1787 he sponsored a successful petition to have the state incorporate the town of Murfreesboro, which he laid off on lands of his father. He was an original member of the Society of the Cincinnati and a Federalist member of the convention of 1789, when North Carolina belatedly ratified the federal Constitution. An active Mason, he founded American George Lodge No. 17 at Murfreesboro in 1789.

His wife, Sally Brickell, having died in 1802, Murfree moved with his children in 1807 to Tennessee, where he had been granted large landholdings as compensation for his services in the war. He died suddenly at his unfinished home, Grantlands, and was eulogized in a Masonic funeral oration by Felix Grundy. In 1811 the state of Tennessee named its new capital, Murfreesboro, in his honor. His son, William Hardy, was a North Carolina congressman, and his great-grandchildren included the novelists Fannie Noailles Dickinson Murfree and Mary Noailles Murfree ("Charles Egbert Craddock").