Josiah Solomon Pender, poet, artist, army officer, and Confederate blockade-runner, was the son of Solomon and Mary Batts Pender of the Tarboro area of Edgecombe County, both of whom were descended from substantial families resident there since late colonial days. He received his early education at the Hickory Grove Academy, of which his father was a cofounder in 1831, and entered the U.S. Military Academy on 1 July 1835 but withdrew voluntarily on 2 Feb. 1836 because of his unwillingness to adapt to the military life. After attending The University of North Carolina in 1838–39, he studied painting in Paris and Rome. He remained in eastern North Carolina for a time before marrying and working for several years in Petersburg, Va. 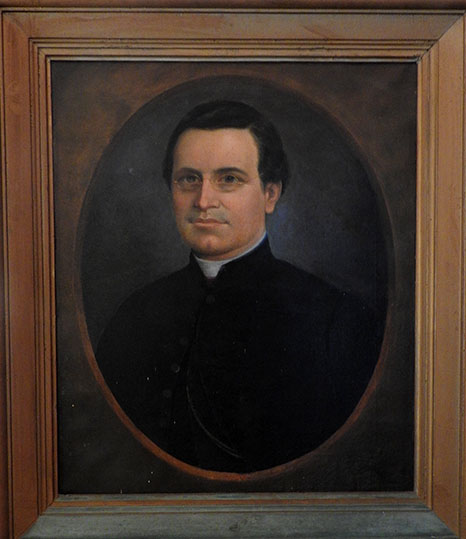 Pender's artistic talent was solicited in 1840 for the painting of several decorative flags to enliven the locomotive Brunswick and its cars for their splendid dedicatory run over the historic new railroad between Wilmington and Weldon on 9 March of that year. There still exist at least six identified portraits that he painted during his career, the most notable being a life-size one of his father, who died on 8 Sept. 1852. The painting of his schooners Alma and Lady Davis demonstrate his skill with other subjects, while his surviving letters and poems reveal a cultivated and ingenious intellect.

Following in the footsteps of his father, who served as treasurer (1832–45) of Concord Lodge No. 58, Ancient, Free, and Accepted Masons, of Tarboro, Josiah Pender undoubtedly became a Mason in 1840, but the official records of that period have been lost. By 1852 he was filling the office of junior warden, and in 1853 senior warden. The Franklin Lodge No. 109 at Beaufort mentioned him as master pro tempore for one of its meetings as early as 1854, but his peripatetic business life affected his regular attendance even after he established his home in Beaufort and transferred his membership from the Concord Lodge in 1856.

When North Carolina was challenged to support the American war against Mexico, Pender returned to Tarboro and volunteered on 23 Dec. 1846 in Captain Louis D. Wilson's Company A, First North Carolina Volunteer Regiment. He was elected second lieutenant on 5 January and was mustered into the U.S. Army at Wilmington on 8 January. Appointed acting assistant commissary of Companies A and E on 14 February, he left for northern Mexico the next day on the schooner E. S. Powell.

On 16 Aug. 1847 Pender was "Disch.d Dishonorably by order of the Commanding General," the choleric General John Ellis Wool, who presumed that he had been involved in a prank subjecting Wool to public ridicule. But no compliment to Pender's character could have surpassed the elegant sword presented to him by his military associates bearing this inscription: "Presented to Josiah S. Pender by his company as a token of respect and confidence in him as a commander. August 16, 1847."

He again reported for active duty on 24 December after having taken his case directly to Washington, D.C., and having been reinstated with the rank of first lieutenant by direct orders from President James Knox Polk and his secretary of war. January–March 1848 found Pender "attending on Court of Inquiry at Saltillo." On 31 May 1848 he tendered his resignation at Fort Monroe in Virginia and withdrew from further military duty. At that period of his life he was described as being 6'1 1/2" in height, handsome in person, distinguished in dress, and courtly in manner.

In 1850 Pender moved his family from Petersburg to the large plantation owned by his father on Hendrick's Creek near Tarboro, where he pursued the profession of artist and operated a successful jewelry business. His frequent trips to Beaufort and increasing fondness for all aspects of the coastal life resulted in his subsequent purchase of three steamships for carrying on trade between the ports of Beaufort, New Bern, Bermuda, and New York. In 1854 he purchased from John H. Neal a part of residential Lot 2 in New Town, followed gradually by some 10,000 acres of land on the North River in Carteret County.

In 1856 he bought his favorite oceanfront hotel, the Atlantic House, which had been erected in 1851, had served as the Hammond Military Hospital (1862–65), and was destroyed by a hurricane in 1879. It was then connected with the mainland by a good bridge and possessed an unusually handsome dining room that featured fine seafood and imported wines. Because his family accompanied him frequently on his trips to Bermuda, he also purchased a cottage in Hamilton. In 1858, the same year that the railroad was completed between Goldsboro and Beaufort, he became involved in a lawsuit because of the carelessness of his shipmaster, James Robbins, on a run to New York, but most of the details of his business career vanished among the private papers taken after his death by his brother Joseph J. B. Pender, who himself died in 1868.

When it appeared that a civil war was imminent, Josiah Pender raised and completely outfitted at his own expense a company of about fifty friends and neighbors (including his eldest son Walter, who held the rank of first lieutenant and was accidentally shot to death the next year while instructing troops in the use of the bayonet), known first as the "Old Topsail Riflemen." On 11 Apr. 1861, the day before the historic attack on Fort Sumter, they marched without official orders upon the unsuspecting Federal officer at Fort Macon, provided him with the railroad fare for an immediate return to the North, and replaced the Stars and Stripes with an improvised flag showing a green pine tree with a coiled rattlesnake at its foot.

Governor John W. Ellis ordered the Goldsboro Rifles, the Guilford Grays, the Orange Guards, and the Wilson Light Infantry (they left home on 18 April) to proceed immediately to the support of Pender, who formally volunteered on 13 April and was commissioned on 16 May as captain of Company G, Tenth North Carolina State Troops (First Artillery) Regiment, Confederate States of America. This company appears to have been known variously as the "Beaufort Harbor Guards" and "Pender's Battery" for some time after being placed under Confederate command on 20 August and ordered to the Bogue Banks on 29 August.

At a general court martial convened at Morehead City on 30 Nov. 1861, Captain Pender was charged (1) with having been absent without leave "from his camp on Bogue Island" between 5 and 20 November, and (2) that he did "falsely state to Col. M. J. White . . . that he had obtained a leave of absence from Brig. Gen'l Hill" at Fort Macon. Commandant White testified that General Daniel H. Hill had "issued no such orders," and General Order No. 21 was issued on 19 December to dismiss Captain Pender from the state service, followed ten days later by Order No. 24 from Richmond dismissing him from the Confederate service.

There is no evidence that Pender ever questioned the decision of the court martial or that his ardor for the Confederate cause was thereby diminished. He undoubtedly felt that his action was justified because of a critical domestic situation and the absence of military activity at his post. Because of his impending dismissal, he was able to remain near his terminally ill wife's bedside in Beaufort, where he received the official notice on the day of her burial. Colonel Lawrence O'Bryan Branch, nephew of Governor John Branch, expressed the opinion of many distinguished North Carolinians when, without questioning the report of the court martial, he described Pender on 18 Apr. 1862 as "brave enterprising and intelligent, and devotedly anxious for the success of the Cause." He also hoped that "the President can, Compatibly with his sense of duty, place him in service" because the Confederacy was "at this time greatly in need of active and enterprising officers to carry on partizan operations against the enemy."

But Josiah Pender had already involved himself and his ships in something that would prove far more advantageous to the Confederate war effort, the running of the blockade then being implemented in Carolina waters by the U.S. Navy. Before the taking of Beaufort and the formal surrender of Fort Macon on 26 Apr. 1862, he had transferred his family and his base of operations to Hamilton on the island of Bermuda. The Alma was lost in 1863, but the Advance and the Columbia (renamed Lady Davis ) were still active at the time of his unexpected death. The steamships Pearl and Cornubia were also involved in some of Pender's operations.

In August 1863 Pender and his second wife are known to have visited Halifax, Nova Scotia, on the Lord Clyde in company with colonial Secretary and Mrs. Miles Gerald Keon and Archbishop Thomas Louis Connolly of Bermuda, after which he steamed for England with a load of merchandise while his wife proceeded toward Wilmington on the Advance with the intention of bearing her anticipated child in the home of her parents at Oak Grove in Edgecombe County. The officer in command of the vessel was so intimidated by the large number of enemy ships that he hesitated to order the final run through the Federal blockade until his small but resolute mistress pointed a pistol at his head and threatened him with an immediately fatal alternative.

It had been Pender's intention to renovate his ravaged home and to bring his family back to Beaufort after the war, but he contracted yellow fever on his last voyage and died in the Atlantic House in October 1864. He was buried beside his first wife near the First Baptist Church. His second wife and the children were then in Edgecombe County, but the three daughters decided subsequently to live with their maternal aunt, Mrs. Jeremiah B. Jeter, whose husband was pastor (1852–70) of the Grace Street Baptist Church in Richmond.

On 23 Sept. 1862, nearly a year after the death and burial of his first wife at Beaufort, Josiah Solomon Pender married Laura Melvina Pender (20 Sept. 1840–6 Nov. 1918), daughter of Louis Coe Pender and his wife Mary Martha Hyman of Oak Grove plantation in Edgecombe County. They had one child, Josiah Keon (19 Oct. 1863–9 Oct. 1881), who spent his brief life there. Mrs. Pender was in greatly reduced financial circumstances for some years after the Civil War, but she subsequently married Captain Charles Betts Cook and had two additional children.