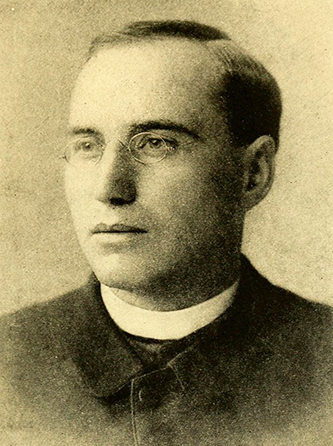 Thomas Frederick Price, first North Carolinian to be ordained a Roman Catholic priest and cofounder of the Maryknoll Missionaries, was born in Wilmington, eighth of the ten children of Alfred Lanier and Clarissa Bond Price. Alfred Price, a journalist and native of Beaufort County, joined at age twenty-one the staff of the then infant New York Sun. In 1843 he returned to Washington, N.C., as a reporter for the Washington Republican and a year later, at the invitation of citizens of Wilmington, moved there to found the Wilmington Journal, which he published as a weekly for seven years. In 1851 the Journal became the first daily paper in the state, and in 1860 it pioneered in the reporting of news by telegraph.

Clarissa Bond Price, who was reared a Methodist, attended school in Washington, N.C., and boarded at the home of Frederick Gallagher, where she met Al Price. The harmony of the Gallagher family life so impressed her that at age twenty she joined "their" Catholic church and thereafter was forever rejected by her parents and the entire Bond family. Al Price, an Episcopalian, surprised his wife and children on Christmas Day 1866 by also adopting the Catholic faith. Their son, Thomas Frederick, at age eight was one of the acolytes who served James Gibbons (later a cardinal) when he was installed the first vicar-apostolic of North Carolina at St. Thomas's Church, Dock Street, Wilmington (1868).

Thomas Frederick received his early education in the basement schoolroom of St. Thomas's. In September 1876 he left Wilmington by ship for St. Charles's College in Catonsville, Md., where, after surviving a shipwreck and a severe illness, he enrolled early in 1877 to begin his studies for the priesthood. A classmate was William O'Connell, later cardinal of Boston. Price completed his theological studies at St. Mary's Seminary, Baltimore.

Ordained on 20 June 1886 at St. Thomas's Church, Wilmington, by Bishop H. P. Northrop, Price was first assigned to North Carolina's oldest Catholic church, St. Paul's, New Bern, where he served as pastor for nine years. From there he was transferred to Sacred Heart Church, Raleigh, where in 1898 he founded an orphanage later known as Nazareth House. In 1897 he began a monthly magazine of apologetics called Truth, printing the first issue in the kitchen of his rectory. Truth had a wide circulation and in 1912 became the publication of the International Truth Society, at which time Thomas Frederick Price relinquished the editorship.

Price preached to missions throughout North Carolina in churches, on street corners, and in open fields. He was particularly interested in the conversion of blacks. Over time he developed many admirers among the Jewish communities and received from these friends lavish contributions for his church building projects in Goldsboro, Chinquapin, Halifax, Newton Grove, and Nazareth. At Nazareth, in conjunction with the orphanage, he developed (1902) a home mission center, the Apostolate of Secular Priests of North Carolina. The success of this venture was retarded by lack of men and money, but the purpose was later extensively developed by the Paulist Fathers, a religious home missionary order.

In 1904 Father Price discussed his mission methods at the first meeting of the Catholic Missionary Union held in Washington, D.C. It was at this conference that he first met Father James Anthony Walsh (later bishop) who was then director of the Propagation of the Faith in Boston. During a six-year correspondence these two men expanded the idea of an American Foreign Missionary seminary under the auspices of the Catholic University of America, with preparatory schools in major cities. They again met in 1910 at the International Eucharistic Congress assembled in Montreal, where their discussions dwelled on specifies for a Catholic Foreign Missionary Society of America. The plans were later endorsed by the American hierarchy, and on 29 June 1911 Pope Pius X gave his approval.

Temporary quarters for the organization were taken in Hawthorne, N.Y., until a permanent site could be purchased in Pocantico Hills. But when John D. Rockefeller offered a higher price for the land, the seller rescinded his agreement with the Catholic Foreign Missionary Society. Through subsequent civil action the society was awarded damages sufficient to purchase a site at Maryknoll, N.Y. Here established, and joined by the Maryknoll Sisters and another religious fraternity, the Maryknoll Missionaries became a renowned institution which in 1915 received the Decree of Praise from Rome. Meanwhile, Father Price was constantly on the road preaching missions throughout the country, recruiting young men for the society, and collecting funds to support the project.

Following World War I the first group of Maryknoll foreign missionary priests was ready for assignment to Yeungkong in southern China. In spite of his age, Thomas Price prevailed in his wish to accompany them. Within the year a combination of change of climate and primitive living conditions took their toll, and in 1919 an acute attack of appendicitis claimed his life at St. Paul's Hospital in Hong Kong. He was buried there in Happy Valley Cemetery, but in 1936 the remains were returned to Maryknoll and buried next to those of his friend and cofounder, Bishop Walsh, in the chapel crypt of the Mother House of the Missionary Society these two had formed. A portrait of Thomas Frederick Price hangs in the Mother House at Maryknoll, N.Y.