Kenneth Rayner, congressman, legislator, national leader of the Whig party, and planter was born in Bertie County, the son of the Reverend Amos Rayner, a Baptist minister and a veteran of the Revolutionary War, and Hannah Williams Rayner, whose family was from Gates and Hertford counties and from whom he inherited a large plantation near Winton. Educated at the Tarboro Academy, he read law under Chief Justice Thomas Ruffin but never practiced. He entered politics and in 1835 was elected to the North Carolina Constitutional Convention. Here Rayner, the youngest delegate present, associated with Nathaniel Macon, William Gaston, David L. Swain, John M. Morehead, and other prominent leaders of the state. Rayner participated in the debate and attracted statewide attention. Despite his antislavery views he served in the state House of Commons in 1835, 1836, and 1838 and in the U.S. Congress during the period 1839–45. Returning to the General Assembly, he served in the lower house between 1845 and 1851 and in the senate in 1854–55. 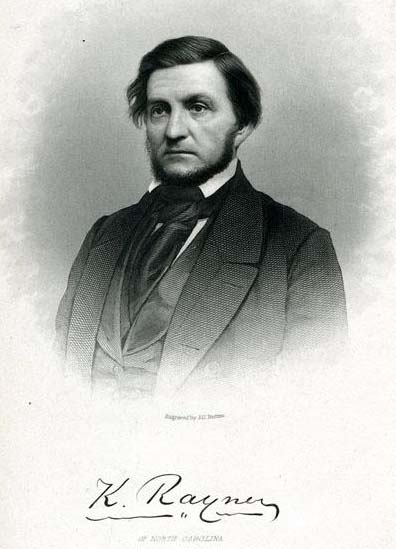 While in Congress Rayner acquired a national reputation. He had entered politics as a supporter of Andrew Jackson, but he followed John C. Calhoun as an advocate of strong states' rights and throughout his congressional career was a consistent and vocal antagonist of John Quincy Adams. During his stormy congressional service, he opposed the annexation of Texas and fought the policies of both Martin Van Buren and John Tyler. A man of fiery temper, Rayner on several occasions came to blows on the floor of the House and at other times served as a second in duels between political figures of the day.

In 1848 Rayner sought an honor, which had he achieved it, would have made him president of the United States. His close personal friend, Zachary Taylor, was seeking the Whig nomination for the presidency, and it was Rayner's desire to join him on the ticket as candidate for the vice-presidency. Taylor's nomination was assured inasmuch as he had the backing of Thurlow Weed, of New York, the powerful boss of the Whig party. Rayner's opponent for the vice-presidential nomination was Millard Fillmore. The two men were close friends and agreed to submit their pretensions to a caucus of party leaders to choose between them. There Rayner lost to Fillmore by one vote. Taylor and Fillmore went on to victory. After but a year in office, Taylor died, and it is reported that Rayner was among those attending the inauguration of President Millard Fillmore on Wednesday, 10 July 1850, at noon in the hall of the House of Representatives.

Many years later when Rayner, then a poor old man and no longer a power in public affairs, was solicitor of the U.S. Treasury (1877–84) under appointment of President Ulysses S. Grant, the incumbent president, James Garfield, was urged to turn Rayner out because he had not been a Garfield supporter. Garfield refused, stating: "I won't do it. Though an old man, and out of favor with fortune he was a host in his day. He is still an able and accomplished lawyer. He fills the office admirably, and he needs the salary. He may not have many friends—but he has at least one and a mighty important friend, for it is I myself—and I am not going to turn him out. I am not going to remove from a little place in the Treasury, whose duties he fully meets, an old man who came within a single vote of filling the place I fill, and being President of the United States."

Following his failure to win the vice-presidential nomination, Rayner's political career began to decline. In 1852 he repudiated the nomination of Winfield Scott and became a leader of the new American or Know-Nothing party. Within his new political affiliation he obtained the party's agreement to defend the Union under all circumstances, a sentiment that he personally never completely abrogated.

When President Abraham Lincoln called for troops, however, Rayner's states' rights philosophy forced him to support secession, and he was a member of the Secession Convention of 1861. Rayner had married Susan Polk (1822–1909), the daughter of Colonel William Polk of Raleigh, and he remained in Raleigh during the war. He personally disliked Jefferson Davis and refused to vote for him. In 1863 he secretly joined a peace movement and the following year, as General William T. Sherman approached the city, Rayner formally surrendered North Carolina's capital to the Union army. In 1865 he endorsed Andrew Johnson's policies for the South, and in 1866 he anonymously published the first biography of the new president—a volume of 363 pages.

Rayner became a Republican. In 1869 he moved to Tennessee and from there to Mississippi, where he owned cotton plantations as he did in Arkansas. President Grant appointed him judge of the Alabama Claims Commission, a position he resigned in 1877 to become solicitor of the U.S. Treasury, a post he held until his death.

A number of Rayner's addresses and speeches were published. Among them was one he delivered at the convention of 1835 and another before the graduating class of the U.S. Military Academy at West Point in 1853, when he was a member of the Board of Visitors.

B. B. Winborne, Colonial and State Political History of Hertford County (1906).

Rayner, Kenneth. Speech of Hon. Kenneth Rayner: in the House of Commons, on the bill to provide for establishing a hospital for the insane. Raleigh: Printed at the Register Office. 1849. https://archive.org/details/speechofhonkenne00rayn (accessed August 14, 2014).

Rayner, Kenneth. Speech of Mr. Rayner, of North Carolina, on the Treasury Note Bill, delivered in the House of Representatives on teh 5th of February, 1841. [S.I.: s.n.]. 1841. https://archive.org/details/speechofmrrayner00rayniala (accessed August 14, 2014).

Rayner, Kenneth. Speech of Mr. Rayner, of N. Carolina, on the bill proposing to distribute annually among the several states, the proceeds of the sales of the public lands. Delivered in the House of Representatives of the U. States, July 6th, 1841. Washington. 1841. https://archive.org/details/speechofmrrayner00rayn (accessed August 14, 2014).

Rayner, Kenneth. Speech of Mr. Rayner, of North Carolina, on the questino of the reception of abolition petitions. Delivered in the House of Represenatives of the U. States on Tuesday, June 15, 1841. Washington? 1841. https://archive.org/details/speechofmrrayner01rayn (accessed August 14, 2014).

Rayner, Kenneth. Speech of Mr. Rayner, of North Carolina, on the question of the reception of abolition petitions. Delivered in the House of Representatives of the U. States on Tuesday, June 15, 1841. Washington? 1841. https://archive.org/details/speechofmrrayner02rayn (accessed August 14, 2014).