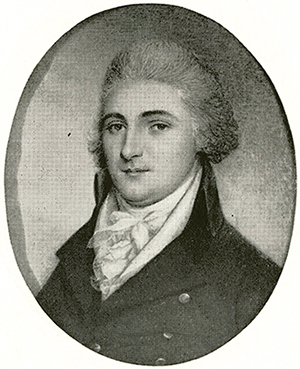 John Steele, planter, Federalist legislator, and comptroller of the U.S. Treasury, was born in Salisbury of Scots-Irish ancestry. His father, William Steel, a merchant, innkeeper, and local real estate speculator, died when John was nine years old. Thus his mother, Elizabeth Maxwell Steel, was the major parental influence. The "Widow Steel" was the owner/operator of an ordinary, the mother-in-law of the Presbyterian divine Samuel E. McCorkle, an ardent Whig Patriot, and the subject of Revolutionary-era legend.

Though exposed to a classical education at the English School in Salisbury and the Reverend James Hall's Clio's Nursery near present Statesville, Steele spent most of his youth in mercantile activities. On 9 Feb. 1783 he married Mary (Dolly) Nessfield of Cross Creek (Fayetteville), the stepdaughter of Robert Cochran, a prominent merchant. This union produced three surviving daughters: Ann, Margaret, and Elizabeth.

Beginning in May 1784, when he was chosen assessor for the Salisbury District, Steele periodically held local offices, including justice of the Rowan County Court. Following election to the North Carolina House of Commons in November 1787, he was selected to represent the borough of Salisbury as a Federalist member of both the Hillsborough and Fayetteville ratification conventions and gained recognition as a perceptive advocate of the new U.S. Constitution. According to James Iredell, leader of the Federalist faction in North Carolina, he was "laborous, clear sighted and serviceable by his knowledge of men." At both conventions Steele's comments on the proposed federal court system constituted an early recognition of judicial review as a check on the legislature. To this was added a strong defense of the new government's taxing power. In later years he would alter his position and views on both issues and, essentially, support the more "Republican" position.

Reelected to the House of Commons in 1788, Steele successfully initiated a motion calling for the partition of an Iredell County out of Rowan. He was also appointed a special commissioner to treat with the Indian tribes in the western part of the state and to secure new boundary agreements. In 1790, and again in 1792, he defeated the ardent Anti-Federalist Joseph McDowell for the Yadkin Division seat in the First and Second U.S. congresses. In that office he spoke out for the extension of post offices and roads to interior North Carolina; favored limitations on federal spending; opposed Alexander Hamilton's plans of assumption and funding and the "odious" whiskey tax; favored creation of the U.S. Bank; chaired the house committee to report on amendments to the Constitution proposed by Congress; and expressed disapproval of an increase in the size of the house, Quaker antislavery petitions, expansion of the free list to include cotton, and the Giles resolutions recommending the censure of Hamilton. Influenced in part by his experience as chairman of a house committee charged with investigating the St. Clair expedition, he played a major role in defending the militia concept and criticizing a standing army accompanied by excessive executive authority.

Though support of the militia was good republican doctrine, his comment that whites were often the aggressor on the frontier may have damaged his popularity with residents of western North Carolina and land speculators. In December 1792 he was defeated by Alexander Martin in a General Assembly vote for the U.S. Senate and returned to the House of Commons in 1793, 1794, and 1795 as a representative from the borough of Salisbury. An energetic legislator, he served on a number of committees including Finance, was nominated for speaker, and was appointed a major general in the state militia, a post he held until 1796. He supported George Washington's neutrality proclamation and court reform legislation and opposed a tax penalty for Quakers, Moravians, and members of other religious sects not serving in the militia. When offered five shares of stock for legislative assistance rendered the Catawba Navigation Company, Steele refused this gratuity on the stated grounds that discharge of a public duty did not allow "private recompense." In 1795, as a result of resurgent antifederalism in North Carolina and Republican control of the legislature, he was again defeated for a seat in the U.S. Senate—this time by Timothy Bloodworth. Throughout his career Steele never lost a popular election, but as party factionalism developed he was increasingly identified with a declining Federalist minority that received few favors from a Republican leadership.

On 1 July 1796 Steele was appointed comptroller of the U.S. Treasury by President Washington—probably on the recommendation of Hamilton. He continued to serve in this important post after the election of Thomas Jefferson to the presidency and was, until his resignation in September 1802, the highest ranking "Federalist" in the Jefferson administration. As a moderate and independent-minded "friend of government," Steele developed and maintained cordial and unique political associations, often across party lines, with many national leaders and intimate friendships of long standing with individuals of such diverse and opposing views as Nathanael Macon and William R. Davie.

Following his departure from the comptroller's office and the national political scene, Steele chose to devote attention to his Lombardy and Lethe plantations, local civic affairs, and county court service. After election to the House of Commons in 1806, he was identified with opposition to court reform legislation calculated to diminish the political influence of court towns and boroughs. An outspoken critic of embargo and war initiatives, he also joined in unsuccessful efforts to create an antiwar coalition of Quid Republicans and Federalists. Appointed a North Carolina boundary commissioner in 1805 and 1807, he helped to settle serious dividing line disputes with both South Carolina and Georgia.

From 1808 to 1811 Steele was an agent for the Bank of Cape Fear and the first representative of a chartered bank in western North Carolina. As a cotton planter he had suffered financially from the embargo and noninter-course policies of the national administration. In 1811 he again represented Salisbury in the Commons, was elected speaker when William Hawkins was elevated to governor, and led a faction in the house that opposed electoral law changes that were calculated to secure Republican party control of the state's entire electoral vote in presidential elections. Until its repeal in 1813, the Electoral Law of 1811, which Steele described as an "aristocratical bias," was the most controversial question in North Carolina politics and aroused Steele as no other issue since the embargo. Defeated for speaker in 1812, he joined William Gaston, John Stanly, William Barry Grove, and Archibald Henderson as unsuccessful electoral candidates. From 1812 to 1815 he served as a trustee of The University of North Carolina. Returned to the Commons in 1813, he supported the war effort but opposed the censure of Senator David Stone as an antiwar Republican.

Steele's death in Salisbury, shortly after his reelection to the Commons, removed a respected advocate of political moderation from the North Carolina scene and contributed to the demise of the Federalist party. According to David L. Swain, first Whig governor of North Carolina and a president of the university, "North Carolina has produced few individuals whose public careers offer more interesting topics for history and biography." Representative of a third political force during the Federalist and Jeffersonian eras, Steele rejected the extremes of both high Hamiltonian federalism and Republican particularism. By resisting factionalism and adhering to the essential republican principles of his day, he enjoyed a modicum of reputation, alleviated his state's extremist propensities, and helped cultivate a moderate Federalist sympathy in North Carolina. The only existing portrait of Steele, painted by the miniaturist James Peale in 1797, shows a pleasant and rather handsome countenance.