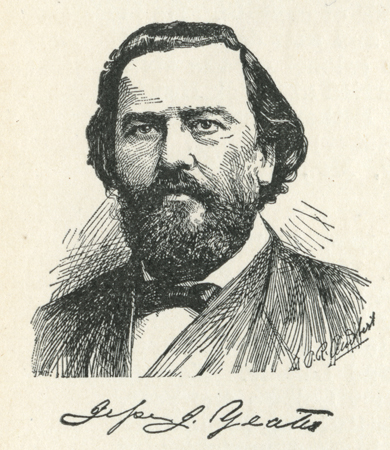 Jesse Johnson Yeates, attorney and congressman, was the son of James Boon and Lucy J. Yeates of Hertford County. He attended schools in his native county and is said to have had "a hard struggle to secure his education and prepare himself for his profession." One of his teachers was Richard J. Gatling, subsequently inventor of the Gatling gun. After graduation from Emory and Henry College, Yeates taught school for two years as headmaster of an academy in the village of Harrellsville.

His first wife, Maria E. Piper of Cedarville, died in 1854 as he was beginning to study law with William N. H. Smith, of Murfreesboro, later chief justice of the state supreme court. In 1855 he was admitted to the bar and in the same year married Virginia Scott, the daughter of James A. Scott of Murfreesboro. He practiced in Murfreesboro for the next six years and served as prosecuting attorney for Hertford County from 1855 to 1860, when he won election to the state House of Commons. During his term he also served as solicitor for the First Judicial District.

At the outbreak of the Civil War, Yeates resigned his seat in the legislature to raise a company that became part of the Thirty-first North Carolina Regiment. He was captured, along with most of his troops, at the Battle of Roanoke Island but was exchanged and spent the last part of the war as a purchasing agent for the Confederate army.

After the conflict Yeates served a term on Governor Jonathan Worth's Council but declined an appointment by Governor William W. Holden as a judge in the First Judicial District. In 1871 he was a delegate to both the state Democratic convention and the state constitutional convention. Elected as a Democrat to the U.S. House of Representatives in 1875, he held a seat in the Forty-fourth, Forty-fifth, and Forty-sixth congresses. His legislative efforts were directed towards securing appropriations for improvements in life-saving and lighthouse service and fostering the U.S. Fish Commission.

On leaving Congress in 1881, Yeates practiced law in Washington, D.C., until his death there eleven years later. He was the father of one daughter by his first marriage and four sons by his second. He was buried in Glenwood Cemetery, Washington, D.C.