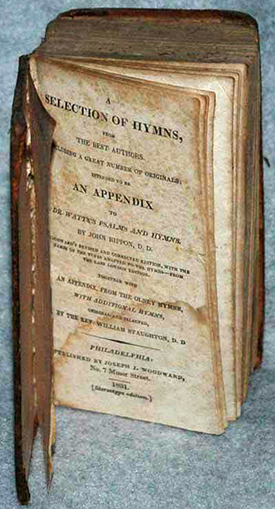 The singing of hymns has long been an integral part of the lives of many North Carolinians. During the colonial period, two denominations, the Anglicans and the Moravians, brought distinctive collections of hymns to North Carolina. The hymns of the Anglican Church were English hymns transplanted to American shores. Following the break with England, this denomination became the Protestant Episcopal Church, but the core of Episcopal hymns remained English. The Moravians, who settled in the Piedmont, were devoted to the singing of hymns with roots in Germany and Eastern Europe. They held Singstunden, services completely devoted to hymn singing, and enhanced their singing with instrumental accompaniments ranging from organ to orchestra.

Following the American Revolution, evangelical hymnody, developed by John Wesley, spread throughout the new nation. Wesley, the father of Methodism, believed that hymns could contribute to an individual's personal salvation experience. A well-written text wedded to a simple tune could offer an individual more theology than a lengthy sermon. The Methodist Episcopal Church spread into the Carolinas by the early 1800s and brought with it the fervent hymn singing authorized by Wesley. Participants sang hymns both in the church and at a new phenomenon, the camp meeting. Born of Methodist revivalism upon the frontier, the camp meeting offered the devoted and the lost, both black and white, the chance to hear preaching and to learn and sing hymns. Through camp meetings, revival hymns spread from congregation to congregation.

The singing schools that arose in the nineteenth century provided opportunities to learn hymns. Periodically a singing master arrived in a region and taught hymns to interested members of a community using shape-note songbooks, which provided easy singing instruction for those who could not read music. Singing schools were enjoyed by many for the pleasure of singing hymns, as well as for the pleasure of courtship and other similar social benefits. All-day hymn singings were an outgrowth of the singing schools, a practice that continues in a few communities.

The singing of hymns permeates religious life today in North Carolina. Hymns remain the central musical offering of church services, and they accompany events such as baptisms, weddings, foot washings, revivals, communions, funerals, and decoration days. Instrumental accompaniments to hymns range from organ and piano to electric guitar and tambourine, although two denominations, the Primitive Baptists and the Church of Christ, forbid the use of musical instruments. A blending of hymn traditions exists as well. The revival hymn "Amazing Grace," for instance, is sung by members of the Pentecostal Holiness Church as well as members of the Episcopal and Roman Catholic Churches. Black spirituals are sung now by a number of white congregations. The Cherokee, as they adopted Christianity, adopted its hymns.