Medical education for North Carolinians who desired to become physicians in the eighteenth or nineteenth century was generally obtained through a program of apprenticeship. In the absence of formal medical schools, experienced physicians, usually of advanced age, often accepted a single pupil or sometimes a small number of pupils. Among physicians active in the colony or state who accepted apprentices were men who had been educated in the medical center in London, Edinburgh, Basle, Utrecht, or Berlin, or in one of the pioneer American medical schools in Philadelphia, New York City, Louisville, Ky., or Charleston, S.C. Those in training to become doctors "read medicine," as it was expressed, and worked closely with their instructor until they were deemed qualified to practice alone. 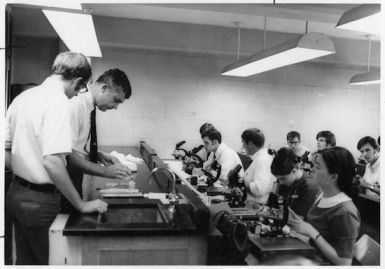 The Moravian community in mid-eighteenth-century North Carolina was home to a number of highly qualified physicians who provided apprenticeships, including Samuel Vierling and Jacob Bonn. In the Wilmington area were Nathaniel Hill and John Fergus, the latter having served on Gen. George Washington's staff. When the State Medical Society of North Carolina was formed in 1849, 91 of the first 172 members had been trained at the University of Pennsylvania, the school most often chosen by North Carolinians before formal medical training became available at the University of North Carolina in Chapel Hill in 1879.

Edenborough Medical College, possibly the first chartered medical school in North Carolina, opened in 1867 near the modern town of Raeford. Its founder, Hector McLean, was born in Robeson County and purportedly received a medical degree from the University of Louisville, although no records exist to verify this claim. The General Assembly granted McLean a charter to open the school because of the state's dire need of doctors.

Not long after it opened, the Edenborough Medical College ran into trouble with the Medical Society of North Carolina. In 1876 the society appointed a committee to investigate the school, and a year later the committee issued a report condemning the school's academic quality. Since no records of graduates from Edenborough exist, it is difficult to evaluate the charges. The committee's report was adopted, but there is no record of further action. McLean died in 1877, and the school subsequently closed. The college's accountability was never resolved.

Although African American residents of North Carolina undoubtedly employed traditional folk remedies in the treatment of family and friends, often very effectively, they were not licensed to practice medicine until 1886. Six years earlier, in 1880, Leonard Medical School was established on the campus of Shaw University in Raleigh with a white faculty and a student body of black males. A small hospital was built nearby, and a four-year curriculum, unusual for its time, was begun. In 1894 Lucy Hughes Brown became the first African American woman to be licensed to practice medicine in the state.

Two of the earliest distinguished woman physicians in the United States each had firm North Carolina connections. Susan Dimock (1847-76) was a native of Beaufort County, and Annie Lowrie Alexander (1864-1929) was a native of Mecklenburg County. Their careers, Dimock's abroad and Alexander's in North Carolina, are recounted in various histories of medicine. Dimock was introduced to medicine when she accompanied a neighbor, S. S. Satchwell, on his visits to ill neighbors in the countryside; Alexander studied under a private tutor and received medical training under her father, a physician. 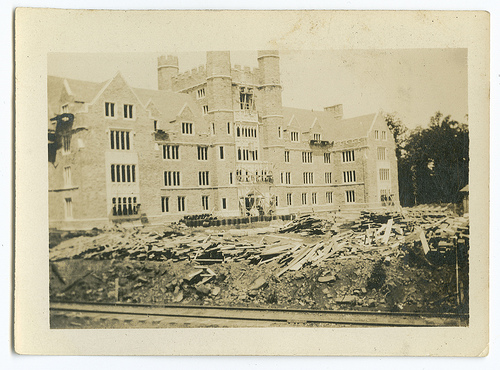 The School of Medicine of the University of North Carolina at Chapel Hill began in 1879, with Thomas W. Harris as dean and professor of anatomy. After the school closed for five years following Harris's resignation in 1885, Richard H. Whitehead became dean and promptly helped raise the school's academic reputation. The two-year medical program continued to grow in stature, and many graduates, after completing their medical education at the country's finest schools, returned to North Carolina to practice.

North Carolina Medical College was founded in 1902 in Raleigh to offer the last two years of medical instruction, supplementing the first two years provided by the UNC School of Medicine. Hubert A. Royster was dean of faculty and professor of gynecology throughout the school's eight-year history. The college gave training in general medicine, surgery, obstetrics, clinical pathology, orthopedic surgery, and other areas. Although technically a department of the university, the college was funded solely through student fees, with faculty members drawing no regular salaries. Inadequate facilities and funding eventually led to an unfavorable appraisal by the Carnegie Foundation and the American Medical Association. Between 1903 and 1910, the school graduated 76 doctors, the majority of whom set up practices in North Carolina.

The UNC School of Medicine became a four-year program in 1954, two years after North Carolina Memorial Hospital (part of the modern UNC Hospitals) opened and became the medical school's primary teaching facility. Both the medical school and the hospital expanded throughout the last half of the twentieth century, when many new buildings, departments, and facilities were established. The school's student body grew to about 640 by 1980 and remained at that number in the early 2000s. The UNC Health Care System was organized in 1998, consolidating the UNC Hospitals and the clinical programs of the medical school.

Wake Forest School of Medicine, originally the Bowman Gray School of Medicine, began as a two-year medical program at Wake Forest College in 1902. The school became a four-year program in 1941, the same year it moved to its new location in Winston-Salem (15 years ahead of the rest of the college). In the early 2000s the Wake Forest Medical Center encompassed the school and several other facilities. Wake Forest researchers have been involved in many firsts in medical history, such as the first medical center in North Carolina to treat cancer using cobalt (1957), the first hand implantation in the United States (1964), the first use of ultrasound to detect prostate cancer in the United States (1969), and the first in the world to successfully use magnetic resonance imaging to locate blood vessel blockages.

Both the Duke University School of Medicine and Duke Hospital were organized in the late 1920s, with classes beginning in August 1930 and Wilburt Cornell Davison as dean. Duke's reputation for cutting-edge medical procedures and education spread throughout the century. In 1957 the school and hospital became part of the Duke University Medical Center, a national and international leader in the research and treatment of cancer, AIDS, Parkinson's disease, schizophrenia, diabetes, Alzheimer's disease, arthritis, and heart disease as well as a world-renowned center for the study of human genetics and medical ethics.

North Carolina's youngest medical school, the Brody School of Medicine at East Carolina University in Greenville, enrolled its first class in 1977 after years of strong support by local leaders who believed that the state's eastern region did not have access to sufficient medical care. After East Carolina presented a successful one-year program for students who went on to complete their medical studies at UNC-Chapel Hill, the General Assembly in 1974 appropriated funds for a four-year institution to be called the East Carolina School of Medicine. Since then the school (which was renamed for the Brody family in 1999), with its connection to regional physicians and University Health Systems of Eastern Carolina, has become a leading medical center in North Carolina.