Public Schools in the Great Depression 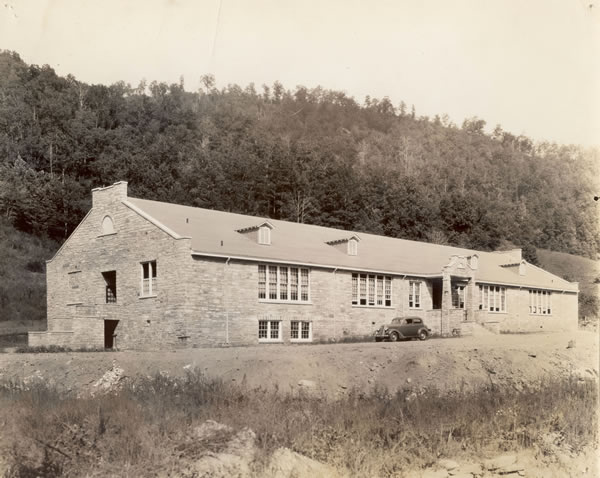 During the Great Depression, many schools across the United States closed because of a lack of money. Despite the hard times, North Carolina did not neglect the education of its children and youth. Not a single public school in the state shut its doors because of the Depression. Clyde R. Hoey, North Carolina’s governor between 1937 and 1941, called the story of education in the state “a romance.” Hoey felt that, overall, things were much rosier for Tar Heel schools than for schools in many southern states.

The schools, the districts, and the educators themselves tried many creative ways to reduce costs and keep schools running. Some schools saved money by getting rid of cafeterias and cafeteria workers. This meant that each student had to bring his or her own lunch—which might be only a biscuit. Sandwiches made from “store-bought bread” were rare in many homes. Without a Thermos bottle to keep milk cool, a lot of students had only water from the school well to drink. Many came to school hungry and left even hungrier.

Some schools cut back on courses considered less essential, like music and foreign languages—although some, unfortunately, had never had such “frills.” Others cut back on sports programs to reduce the cost of buses for athletic teams and heat for gyms. Schools often stopped providing supplies like colored paper and paints for students.

Throughout the 1930s, though, North Carolina leaders continued to work to improve the public schools. Those schools differed in many ways from today’s schools. For one thing, students did not attend school for nine months a year as they do now. North Carolina did not require a six-month school year for all schools until 1931 and an eight-month year until 1933. (Different county and local school systems might have operated for different lengths of time; even during the Depression, some districts stayed open for nine-month years.) Most students in the 1930s did not attend kindergarten or twelfth grade. Not until the 1940s did twelve years of schooling become a requirement in North Carolina. State officials added kindergarten much later.

In 1931 North Carolina had 6,729 schools; almost one-fourth were buildings with only one room and only one teacher. These teachers taught all grade levels in a single classroom. Even though the number of students was often small, the teacher had to divide time among all the grades. It could be difficult for students to “tune out” the lessons of another class while trying to complete their own work. Teachers often found it hard to plan the day.

Of the roughly 1,600 one-room schools in North Carolina in 1931, 935 were for African American students, and 665 were for white students. Segregation at that time separated most students by race, sending them to different schools. Even though the state constitution required that the segregated schools be “separate but equal,” neither the buildings, supplies, and books, nor the treatment of students and teachers, was always equal.

Teachers in the same area did not always get equal salaries. North Carolina paid teachers based on experience, whether they had a “full” class, and their education level. The salary range for white teachers in 1933 was $45 to $90 per month. African American teachers had a different scale: $35 to $70. The differences—and the low wages—were problems.

In the 1930s, Cherokee children often attended missionary schools, which frequently required them to speak English—not their native language. Sometimes the mission teachers tried to change traditional beliefs. Many Cherokee families did not want this to happen. They wanted to manage their own affairs and preserve their heritage. The United States government began to listen to the American Indian families. Some New Deal–era legislation, and more mission teachers, began to provide programs that did not force students to abandon their cultures.

Other American Indians wanted to attend public schools. Robeson County, for example, had many American Indian students. An area in that county might have three schools: one for white children, one for black children, and another for Lumbee children.

In 1931 the state passed a law that a teacher in a school with fewer than 22 students would receive a salary cut. Counties and areas began to look at consolidating, or combining, one-room and other small schools. Such action proved difficult, since money for building new schools and for busing was limited.

With consolidation—which meant fewer, larger schools—many students began to travel longer distances. More had to ride buses, because the distance to school was too far to walk. By 1937, North Carolina transported more children to school by bus than any other state. The state government managed buses and their routes.

The average Tar Heel student traveled 20 miles per day. The state’s per-student cost was $5.34, by far the lowest per-student cost in the nation. North Carolina had good safety records despite the slick dirt roads, snow, and ice.

In 1933 the General Assembly voted to control all of the public schools; this made North Carolina the first state with such a system. Because many county or local governments did not have the money to support public education during the Depression, state control kept schools from closing. The legislature, however, had to provide funding. To ensure that money was available, legislators reduced the number of school principals and created a 3 percent sales tax. Schools also cut teachers by the hundreds, resulting in larger, sometimes crowded, classes. Teachers who kept their jobs often received salary cuts and sometimes even vouchers—promises of pay later—instead of actual paychecks.

School districts with less money liked the new system, which made things more equal across the state. Officials of some schools and better-off districts, however, did not like it.

Congress established the Works Progress Administration in April 1935. The program paid people to do useful work rather than merely giving them a handout, or dole. The WPA helped construct baseball fields for schools and communities. Other WPA projects included conducting nursery schools, serving school lunches, and giving plays and concerts. The WPA built new schools across the state and added to or remodeled several existing ones.

In Ellenboro, Rutherford County, for instance, WPA workers added a three-story auditorium to the older 1924 school building. The WPA also constructed a workshop for agriculture students in the existing building. Older students benefited, too. The WPA built some of the facilities still in use on college campuses, including Appalachian State University in Boone and North Carolina State University in Raleigh.

Children whose families farmed for a living in the 1930s—as most North Carolinians did—often had a more difficult time attending school, compared to children living in towns. These country children might have to miss school at planting time, at hoeing time, and at harvest. Families usually needed every member working in order to survive.

Children of tenant farmers, who rented instead of owning land; sharecroppers, who worked another person’s land for a share of crops; and migrant workers, who moved to new jobs along with farm seasons, had even more trouble. They not only had to consider crops when planning their school attendance, but they also often had to change schools when their parents moved to find work and housing.

Many children in rural areas living during the Great Depression had to milk cows, feed farm animals, draw water, cut firewood, and complete other chores before boarding the bus or walking to school—if the adults decided they could do without them for part of the day. If they did get to school, they might have been tired from chores and work before the first lesson. Upon returning home, they probably had plenty more chores to do. Homework may have been done with only a candle or a kerosene lamp to read by because many homes did not yet have electricity. And electricity and kerosene were expensive.

Many textile workers across the South lived in mill villages near the factories. The companies often owned the mill houses, and mill owners sometimes contributed to teacher pay and schoolhouse construction. In North Carolina, such support for education by plant owners varied. One company that did provide school support was in Cliffside, Rutherford County. Charles H. Haynes, son of the textile executive R. R. Haynes, built a brick school near the Cliffside plant in 1920–1921 for $250,000. This building, in Classical Revival style, appears on the National Register of Historic Places. It remains in use in 2010.

Before the 1930s, children of textile workers in North Carolina often quit school at an early age to work in the mills, earning money for their families. By 1931, though, all of the southern states had laws against employing children under 14 and against hiring those under 16 for night work. Enforcement of the laws was difficult, and younger children still worked for wages in some mills.

Despite all of the problems, inequalities, and challenges, Tar Heels made much progress in education during the difficult 1930s. More students attended school, and many schools improved. More teachers held college degrees. Compared to a lot of other states, North Carolina had plenty to celebrate. But a great deal of work remained in providing a good public education for all of the state’s young people. Today that work continues.

*At the time of this article’s publication, Dr. Anita Price Davis was Charles A. Dana Professor of Education Emerita at Converse College. She is the author of North Carolina during the Great Depression: A Documentary Portrait of a Decade (Jefferson: McFarland and Company Publishing, 2003).
Audio: