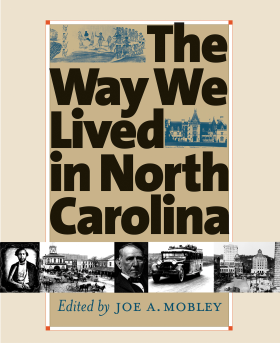 The Way We Lived in North Carolina is a collection of short essays in NCpedia that tell the social history of the state from the history of its first peoples through the early 2000s. The content in this collection has been excerpted from the original single-volume print book publication, published by the North Carolina Office of Research and History in 2003.

The narratives cover a range of topics in the state’s social history from rural and daily life throughout eras to the development of industry, transportation, energy and infrastructure that changed the state from a rural state of small family farms to the industrial, business, technology and science and educational hub it is today.  It provides an overview of these changes in brief and broad brushstrokes for a general audience. The collection includes numerous images and maps that lend deeper context to the historical overviews, as well as links to other NCpedia content to delve further into a variety of historical topics.

Part I: Natives and Newcomers, North Carolina before 1770

Natives and Newcomers describes North Carolina's Indians and the dramatic changes that occurred when Europeans and Africans entered their land.

Even before Raleigh's "lost colony," Europeans had explored the coast and the mountains. The first permanent newcomers were English migrants from Virginia, followed after 1715 by planters and slaves from South Carolina.

In the next half-century, thousands of German, Scotch-Irish, and Scottish settlers came by boat from Europe and by wagon from the North. Those who carved out farms in the piedmont had little in common with coastal planters or the backcountry elite of lawyers, judges, and merchants. By the late 1760s, western farmers organized as Regulators to protest unjust taxes, corrupt courts, and threats to private property—issues that would soon reappear as part of the patriotic rhetoric of the American Revolution.

When the shooting of the American Revolution died away, North Carolinians continued to work out the meaning of independence in the fabric of their daily lives. An Independent People describes how these efforts toward independence left their marks on public and private life.

Early republican North Carolina was no egalitarian utopia. Most African Americans were slaves, Indians were more threatened than before the war, and all women remained subordinate to men. In the years after the Revolution, however, free North Carolinians wrote their first constitution, opened the first state university, and transformed their churches in a stirring revival of religion.

By 1820, North Carolinians were facing the insistent reality that one cycle of adjustment would not be enough. The demands of independence would call for repeated bursts of wrenching transformations.

North Carolinians of the nineteenth century dwelt in an agrarian world. Close to the Land details the lives of antebellum Carolinians from the tobacco field to the grist mill, the courthouse to the schoolyard, and the camp-meeting arbor to the slave-quarter stoop.

The farm, whether of ten acres or ten thousand, was the basic unit of economic production and social organization in antebellum North Carolina. The Tar Heel town, whether port city or backcountry village, was intrinsically tied to agriculture. Even budding industry and improved transporation facilities were essentially the outgrowth of efforts to process agricultural products and to reach markets efficiently. Although war and industrial expansion were to revolutionize society and transform the economy, the state's continued committment to agriculture linked North Carolina with its rural traditions.

Few would have guessed in 1870 that within fifty years, North Carolina would be the most industrialized state in the South. The Quest for Progress recounts that half-century of turbulent change and growth.

An accelerating pace of life was evident everywhere in North Carolina at the turn of the century, from mill villages to mushrooming towns. Skyscrapers and suburbs, country estates and mountain resorts testified to the state's new wealth. But new conflicts marked the era as well. Farmers plagued by debt fought back in a Populist movement that carried its cause to the nation. Working men and women fought to keep their independence on the factory floor. Black North Carolinians, despite violence and disenfranchisement, built the churches, colleges, and businesses that prepared the next generation to reclaim its rights. By 1920, North Carolina was a state transformed.

After 1920, North Carolina made great strides in industrial development—most notably in tobacco, textiles, and furniture—but labor problems remained an issue. A sound government ensured progress in education and highway construction, preservation of natural resources, and development of cultural opportunities. Civil rights and social reforms came too fast for some, too slowly for others.

By 1970, confrontation and compromise had resulted in major accomplishments, but North Carolinians found themselves questioning how they should define progress in the years ahead.

At the beginning of the new century, North Carolinians lived in a state undergoing profound change. Gains by minorities included the election of two African Americans to the U.S. House of Representatives. Women assumed leadership roles at all levels of society. The influx of newcomers, particularly Hispanics, crowded school systems but undergirded the workforce. Foreign competition placed unforeseen pressures on the state's traditional industries.

Today, information technology and the rise of the knowledge economy are having a major impact on the social fabric of everyday life in North Carolina.

Keep reading: Part I: Natives and Newcomers | North Carolina before 1770

[Cover art]. Illustration. 2003. In The way we lived in North Carolina. Chapel Hill, NC [u.a.]: Published in association with the Office of Archives and History, North Carolina Dept. of Cultural Resources, by the University of North Carolina Press.

Spot on with this write-up, I truly assume this website needs way more consideration.

Thank you for all of your hard work on this site. My mom loves making time for research and it is easy to understand why. We all learn all regarding the compelling mode you convey simple steps through the web site and boost contribution from people on this situation while our child is always being taught a whole lot. Take pleasure in the remaining portion of the year. You are always doing a wonderful job.
adidas tubular

Thank you for all of your labor on this website. My niece really loves getting into investigation and it's really simple to grasp why. My partner and i notice all relating to the dynamic means you present effective techniques via this web site and therefore increase participation from the others on that content while our simple princess has been discovering a lot. Enjoy the remaining portion of the new year. You are always performing a wonderful job.
kd 12 http://www.kd12.us.com

I definitely wanted to jot down a comment so as to say thanks to you for those wonderful recommendations you are sharing at this website. My extended internet lookup has finally been compensated with awesome ideas to go over with my classmates and friends. I 'd admit that most of us visitors are undoubtedly blessed to dwell in a wonderful place with very many awesome people with very helpful guidelines. I feel rather fortunate to have encountered the webpages and look forward to plenty of more fun times reading here. Thank you once more for everything.
supreme clothing