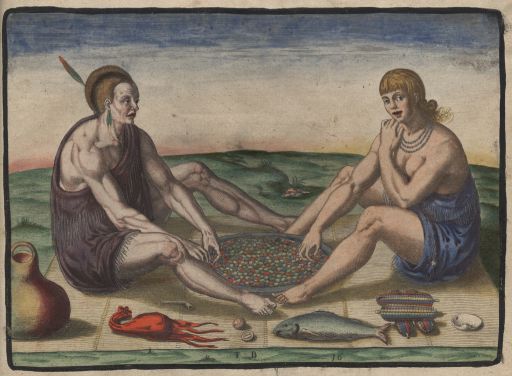 Agriculture long dominated North Carolina's economy and society, and women constituted an invaluable source of agricultural labor. Native Americans after about 1000 B.C. developed villages with fields of squash, corn, sunflowers, pumpkins, beans, and other vegetables tended by women. Women provided most of the agricultural and domestic labor, and all residences, fields, and agricultural tools belonged to them. The matrilineal kinship system followed by Native Americans-in which children traced their lineage through their mothers rather than their fathers-also reinforced the influence of women. Native American women enjoyed considerable freedom over their choice of husbands or in deciding to divorce. If a couple parted, the man returned to his mother's house. Indian women's authority and autonomy surprised and shocked Europeans in colonial North Carolina.

Most of the first Euro-Americans who moved into North Carolina from Virginia in the 1650s were either servants or women married to poor farmers seeking land in the fledgling colony. Many women expected to marry and become mothers, and single women were sometimes scorned. Women headed no more than 5 percent of the colony's households. The Lords Proprietors, who received their charter to Carolina in 1663, actively encouraged the immigration of women by offering them land grants to settle in the colony. Female indentured servants also received a grant of land after their period of servitude ended, and colonists received headrights for each slave, male or female, they imported into the colony.

Southern women well into the twentieth century lived under a patriarchal system that placed white men at the top of a hierarchy that enforced women's economic and social subordination. Married women under English common law were femes covert who held no property rights. Their legal status was subsumed under that of their husbands. Only widows or single white women could own property under common law. White men were legally the masters of their wives and children and, until the end of the Civil War, of the enslaved African Americans who worked their land. Enslaved black women stood at the bottom of the hierarchal structure. Native American women, who were nonwhite but free, were also marginalized in North Carolina.

Farm life on the frontier was a harsh existence on isolated subsistence acreages occupied by men and women struggling to survive by raising a few crops and perhaps some hogs and chickens. Women needed to be self-reliant, industrious, and able to withstand harsh and sometimes dangerous living conditions. Education remained rare, except among the Moravians, who built schools for both boys and girls in the eighteenth century.

The colony matured slowly before rapid settlement in the 1750s. Families who lived in small towns or on larger plantations accumulated wealth from land speculation; the cultivation of rice, cotton, and tobacco; and the production of naval stores. The wealthiest educated their sons and daughters by hiring tutors, although most women received only a rudimentary education in reading, writing, and math. Town women shaped their communities through domestic and public work and the support of churches. Some women became midwives and nurses or ran taverns, inns, boardinghouses, ferries, and shops. A few worked as attorneys during the early colonial period. Many were regular communicants in denominational churches that emerged in North Carolina, especially after the First Great Awakening in the 1730s, raising money for their churches. A few Quaker women became traveling ministers for their faith, as well.

African slaves appeared in the colony by the 1680s, with more men than women being imported at first. They lived under slave codes that controlled their lives. Enslaved men and women endured hard work, poor food, and inadequate shelter during much of the colonial period, yet they formed families and larger slave networks despite these hardships. Slave marriages were not legal, but owners found it beneficial to accept slaves' marriage arrangements. Children born to slave women became the property of the slaveholder. By 1767 nearly 41,000 slaves lived in North Carolina. That number had increased to 100,000 by 1790.