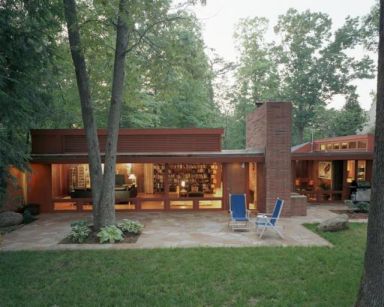 hydroelectric power for the war effort and for the region, of which the largest and most famous is Fontana Dam, designed in a monumental modernist form by TVA architect Roland Wank. World War II brought another hiatus in nonmilitary construction. Rapid, vast undertakings such as the expansion of Fort Bragg and the construction of the huge naval air station docks near Elizabeth City required practically endless supplies of labor and materials. After the war, the urgency to rebuild again brought a building boom. The era saw the creation of shopping centers-Cameron Village in Raleigh was the first in the Southeast-as well as the construction of veterans' housing and new suburbs and the design of practical modern dwellings for farmers (such as the work of North Carolinian Woodley Warrick, who designed the "Number 90" ranch house for the Farmers Home Administration).

Although North Carolinians continued their conservative architectural preferences, the postwar years also ushered in an important chapter in the history of progressive, advanced architectural ideals. In 1948 the School of Design (later renamed the College of Design) was established at North Carolina State University in Raleigh. Under founding dean Henry Kamphoefner, the school's Department of Architecture established a strong modernist presence. Other modernist landmarks also appeared across the state as the postwar building boom gained momentum in the 1950s and early 1960s; these included A. G. Odell's coliseum in Charlotte and Mitchell Giurgola's visitors center, a Mission 66 building, at the Wright Brothers National Memorial. 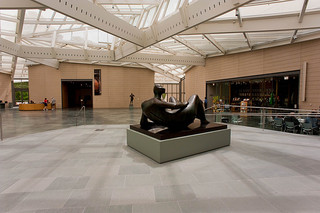 The public reaction to the spread of architectural modernism was mixed. Before his death in 1950, N.C. State Architecture Department head Matthew Nowicki designed the famed Dorton Arena, an innovative building that eventually won over the hearts of Raleigh's citizens, even being named a National Historic Monument in 1972. When architect I. M. Pei planted his Akzona (now Biltmore) Building on Asheville's Pack Square in 1980, it was criticized for being bland or inconsistent with the town's architectural stylings. Bold glass structures loosely influenced by the "skin and bone" style of modernist Ludwig Mies van der Rohe, including the Blue Cross and Blue Shield headquarters in Chapel Hill and Durham's newest skyscrapers, the People's Security Building and University Tower, have received mixed reviews. Arenas, once designed solely for capacity but sometimes lambasted for their outward appearance, have become more ornamental, as evidenced by comparison between Raleigh's RBC Center (now PNC Arena) and the University of North Carolina at Chapel Hill's Dean E. Smith Center, built more than a decade earlier.

Public opinion has yet to stem the tide of bold new designs as North Carolina's population and need for business and cultural centers expands. The year 1999 saw plans scrapped for a 100-story skyscraper in Charlotte that would have housed the headquarters of First Union Bank. Charlotte's downtown district, however, continues to grow as it develops into the South's leading banking center. In 2005 Duke University opened its Nasher Museum of Art, a modern structure with a minimalist approach designed by reputed architect Rafael Viñoly. North Carolina will, no doubt, continue to play host to shifting architectural ideas, whether they are brought to reality in its cities or taught at its design schools.