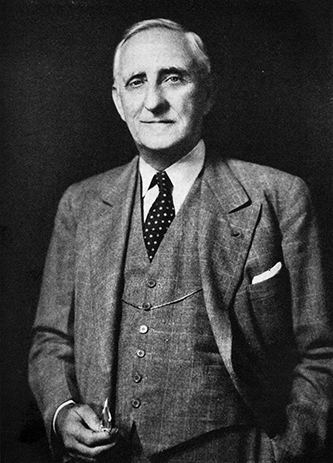 Aubrey Lee Brooks, lawyer, politician, and author, was born at Bethel Hill near Roxboro, in Person County, of English and Ulster Scot ancestry. His father was Zachary Taylor Brooks, a physician, and his mother was Chestina Hall.

Growing up as what he termed "a Person County farm boy," he enjoyed what he considered "the last word in human happiness—a gun, a dog, and a negro boy chum." In the poverty-stricken Reconstruction days, he developed early a sort of rugged, homespun philosophy that carried him through life, a philosophy based on the premise that "Whatever a man sows, that shall he also reap."

Tutored until he was ten by his mother, he then attended the Bethel Hill Academy for six years. His first job, at the age of seventeen, was that of teacher in a one-room free school two miles from his home, at the salary of $35 a month. After teaching for two years, he had saved enough money to enter The University of North Carolina, but he was prevented from completing his courses by an attack of typhoid fever. After a business course at the University of Kentucky, he reentered The University of North Carolina and completed the law course in September 1893.

Brooks entered practice with colonel Charles B. Winstead in Roxboro. He soon attracted the attention of one who was greatly to influence his life and political thinking, William Walton Kitchin, then chairman of the Person County Democratic Executive committee and later to be U.S. congressman (1897–1909) and governor of North Carolina (1909–13). Brooks and Kitchin traveled by horse and buggy to fill speaking engagements in the election of 1894; Brooks furnished the horse and buggy and Kitchin the oratory.

In 1896, Kitchin asked Brooks to nominate him for Congress against the Republican incumbent, Thomas Settle. Kitchin was nominated by acclamation, and Brooks became nominee for presidential elector. Soon after Kitchin's victory, Brooks was offered a law partnership by Colonel James E. Boyd of Greensboro, who had just been appointed assistant to the attorney general of the United States and was later to be federal judge for Western North Carolina. In Greensboro, Brooks began a distinquished legal career in which he, an avowed Jeffersonian Democrat, was to be associated closely with certain "pet" Republicans, beginning with Colonel Winstead in Roxboro and Colonel Boyd in Greensboro. When Boyd was elevated to the federal bench, Brooks chose a Republican national committeeman, Johnson J. Hayes of Wilkesboro, as his successor; Hayes remained in Brooks's firm until he was elevated to the newly created federal middle district court of North Carolina. In Hayes's place, Brooks chose Kenneth M. Brim, another Republican who had been referee in bankruptcy under Judge Hayes.

In 1898, Brooks was elected solicitor of the Ninth Judicial District, one of the richest and most populous sections of the state. There followed ten years of fighting against the most powerful vested interests in the state, the tobacco trust and the railroads. Aligning himself with W. W. and Claude Kitchin, Josephus Daniels, and Walter Clark, he ran headlong into difficulties with the powerful Furnifold Simmons machine. Indeed, Brooks felt that his defeat as a candidate to succeed W. W. Kitchin in Congress in 1908 and his defeat in the 1920 primary fight to succeed Lee S. Overman in the U.S. Senate were attributable to Senator Simmons's political machine.

Between these two political defeats, Brooks's brilliant legal career led Chief Justice Walter Clark to call him "the foremost and most successful lawyer in North Carolina." In a period of over fifty years he participated in some of the most important and sensational court trials in North Carolina: the famous Cole case, which provided material for the Broadway success Coquette; North Carolina Public Service Company v. Duke Power Co.; the Ann Cannon-Smith Reynolds-Libby Holman case (as a result of which Brooks and other outstanding lawyers won $10 million for Ann Cannon); and the political suit brought by the trustees of the First Presbyterian Church of Greensboro against the Richardsons and the Vick Chemical Company.

Brooks also served as chairman of the Greensboro Chamber of Commerce, president of the North Carolina Bar Association, and general counsel of a number of insurance companies, including the Jefferson Standard Life Insurance Company. His professional eminence was evidenced by the fact that presidents Woodrow Wilson, Herbert Hoover, and Franklin D. Roosevelt considered him for a seat on the U.S. Supreme Court.

At The University of North Carolina, Brooks set up the Brooks Scholarship Fund (in excess of $1 million) for worthy students from the old Fifth Congressional District; he also established a revolving trust fund for The University of North Carolina Press. He gave a new $50,000 chancel and choir loft to the First Presbyterian Church of Greensboro and presented a 482-acre site, including a hunting lodge and a lake, to the General Greene Council of Boy Scouts of America.

Brooks devoted his last years to intellectual pursuits. His first book, Walter Clark, Fighting Judge, published in 1944 by The University of North Carolina Press, was a sympathetic treatment of the controversial chief justice. Later, in 1948 and in 1950, the university press published the two-volume Papers of Walter Clark, which he coedited with Hugh T. Lefler. In 1950 the same press published his autobiographical Southern Lawyer: Fifty Years at the Bar, replete with courtroom anecdotes, political contests, sensational trials, fox hunts, foreign travels, and friendships with such national figures as William Jennings Bryan, John W. Davis, Oliver Wendell Holmes, and Eleanor and Franklin D. Roosevelt. Finally, in 1954, Brooks's Selected Addresses of a Southern Lawyer appeared. At the time of his death he was collaborating with this writer on a biography of Chief Justice Thomas Ruffin. He received an honorary degree from The University of North Carolina, served as president of the Historical Society of North Carolina, and was a member of the Society of American Scholars.

Brooks was first married in 1895 to Maude Harris of Roxboro, by whom he had one son, Robert. His second wife was Helen Thornton Higbie of New Jersey, whom he married in 1910 and with whom he had three sons, Aubrey Lee, Jr. (killed in an automobile accident), Thornton Higbie (a partner in his father's law firm), and James Taylor (a physician in Greensboro). Mrs. Brooks died in 1974.

Brooks was buried in Green Hill Cemetery in Greensboro. A portrait of him, by Goris Gordon, hangs in his home, now occupied by his son James Taylor.