Edwin Wiley Fuller, poet and novelist, was born in Louisburg, Franklin County, the son of Jones Fuller, a cotton broker and merchant, and of Anna Long Thomas, a lady of culture, religion, and gentility, who provided a home atmosphere that nurtured his literary bent. She was the great-granddaughter of William Richmond, who was the brother-in-law of Sir Peyton Skipwith of Prestwould, near Boydton, Va. Her grandfather was Colonel Gabriel Long, of Halifax, whose residence, Quankee, had more than a state reputation. Colonel Nicholas Long, her great-grandfather, had been a Continental officer from North Carolina during the American Revolution. 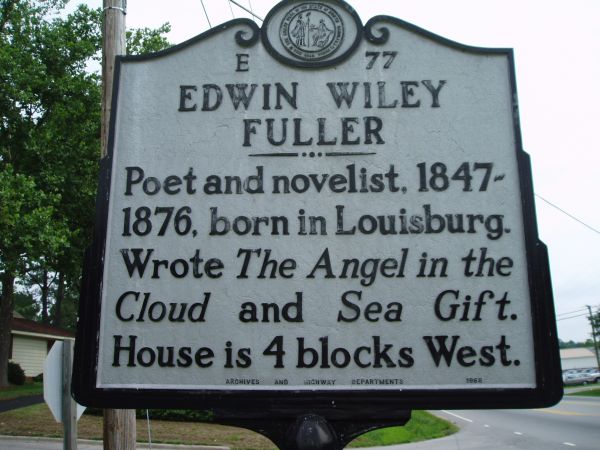 Contemporary records describe Edwin Wiley Fuller as a man short in stature; with "eagle eye" and "gentile, winsome manners," he was respected for the strength of his character. He completed his secondary education at Louisburg Male Academy during the Civil War and entered The University of North Carolina as a freshman in the fall of 1864. After two years' study in Chapel Hill, he returned home and helped his father with his business for a year. In October 1867 he and his roommate and first cousin, George Gillett Thomas of Wilmington, enrolled in the University of Virginia, Charlottesville, from which Fuller received diplomas in the schools of English literature and moral philosophy in 1868.

Interested since childhood in literary pursuits, Fuller joined Delta Psi fraternity and was chosen as its anniversary orator his freshman year. In 1866, he was one of the sophomore declaimers at commencement. Although he wrote some verse before entering the university, his first published items were the poems "The Village on the Tar" and "Requiescam", which appeared in the University Magazine at Chapel Hill. After a year's lapse his publications resumed with the printing of a number of items—poems, "The Angel in the Cloud," "An Elegy, Written on the Rotunda Steps," and a short story, "The Cat and the Corpse"—in the University of Virginia Magazine, 1868 spring issue.

Poe, Tennyson, and Dickens were Fuller's favorite writers. Some of his early poems were parodies—"The Village on the Tar" apes Caroline Norton's famous "Bingen on the Rhine," and his "Lines Written on an Analytical Geometry" is patterned after Poe's "The Raven." Another poem, "Requiescam," and his single published short story, "The Cat and the Corpse," are after the manner of Poe. At Charlottesville in 1867–68 Fuller and his roommate often made forays into the Ragged Mountains, about which Poe had written, and they taught brief 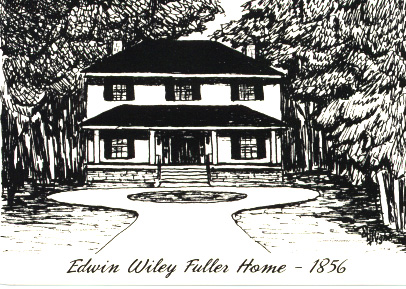 ly at a rural school.

In a letter written in the spring of 1867, while he was at home working in his father's store, Fuller expressed dissatisfaction with the idea of a merchant's career. He said he wanted to be a lawyer. Because of his father's failing health, however, he returned to Louisburg in the summer of 1868 after graduating from college. In a letter of 12 Mar. 1870 Fuller told a friend that he had for a time desired to enter the ministry, but, after "wrestling with the great cross" of leaving his father to conduct the business alone, he had decided against it. On 17 July 1870 Fuller's father died, leaving the young man in charge of the business, which was renamed E. W. Fuller's.

By January 1871 he had completed the manuscript of his first book, a lengthy revision of his didactic poem, The Angel in the Cloud ; it was published that summer by the transplanted Tar Heel firm of E. J. Hale & Son in New York City. The book, which received favorable notice in such newspapers as the New York Times and the St. Louis Advocate, remains his best-tailored literary production. An 1892 reviewer for The Wake Forest Student, a North Carolina college magazine, said, the poem "rises to almost Miltonic grandeur," and an 1876 obituary notice in The Evening Review, Wilmington, N.C., opined that, had he lived, Fuller might have become "the Milton of America." The Angel in the Cloud was reprinted with a new author's preface in 1872. In 1878 a third edition was brought forth, enlarged to contain a twenty-five-page biographical sketch, and a number of Fuller's minor poems. The book was reprinted again in 1881 and, by the author's family, in 1907.

Fuller's novel, Sea-Gift, published by Hale in 1873, did not achieve its greatest popularity until after his death. Its frank treatment of sensitive aspects of southern life offended many North Carolinians who had been "inspired to rapture" by his religious poetry. It was to be a writer of prose, however, rather than of poetry, that Fuller aspired. He was sensitive to criticisms that his novel's manuscript was, in some respects, crudely done, and he planned to make revisions but did not live to do so. Sea-Gift is, in some respects, autobiographical. It describes the youth of one John Smith, his career at The University of North Carolina, and his participation in the Civil War. The novel is interesting for a number of reasons. It was the first novel set, in part, in the town of Chapel Hill. Second, it contains a tall-tale telling contest including a definition of the tall-tale presented over thirty years before Mark Twain's essay was published on the same subject. Third, the plot incorporates the university's "Dromgoole Myth" concerning a famous duel fought near Piney Prospect in Chapel Hill. The book became known as "The Freshman's Bible" in the latter nineteenth century and its influence probably had a bearing on the formation of the Order of the Gimghoul at The University of North Carolina and the construction there of Gimghoul Castle. Finally, elements of the Sea-Gift plot involving, first, a long train ride to enter college, and second, the burning of a plantation house by Yankee soldiers, may have influenced Thomas Wolfe and Margaret Mitchell in the writing of their later novels, Look Homeward, Angel, and Gone With The Wind, respectively.

Fuller was interested in local politics and believed in participating. He was elected, first, a town commissioner, next, mayor of Louisburg, and, finally, a Franklin County commissioner.

On 26 Sept. 1871, he married Mary Elisabeth Malone, daughter of Dr. Ellis Malone of Louisburg. Their first child, Ethel Stuart, who died in December 1874 at the age of sixteen months, inspired several poems of mourning such as "The Last Look" and "Out in the Rain," which were widely reprinted in newspapers in several states. Another daughter, Edwin Sumner, was born only five weeks before the author's death; she married Asa Parham of Henderson. The author's only sister, Anna Richmond Fuller, married Dr. James Ellis Malone, brother of Fuller's wife, in 1878.

Ill with consumption for many months before his death, Fuller composed verses entitled "Lines, Written After Having a Hemorrhage From the Lungs," which he instructed his wife to unseal and read only after either his recovery or his death. He died after dramatically dictating in his last moments a poem for the Ladies Memorial Association of Wilmington, which was sung at Confederate memorial services at Oakdale Cemetery by a choir of two thousand persons on 10 May 1876.

Fuller died in Louisburg and was buried in the Green Hill House Cemetery. He was a Democrat and a Methodist. A photographic portrait and many of his letters belong to the Fuller-Thomas Collection in the manuscript department of Duke University Library, Durham. A limited edition of Sea-Gift was reprinted in 1940.