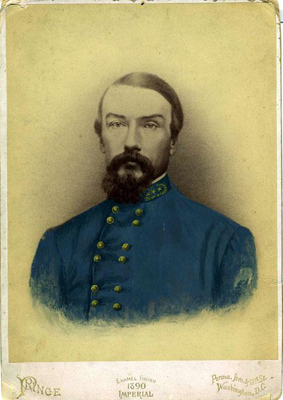 Collett Leventhorpe, physician and soldier, was born at Exmouth, Devonshire, England, where his parents were temporarily residing for reasons of sustaining his father's health. His family lineage went back to the ancient family of Leventhorpe Hall, of Yorkshire, which moved to Hertfordshire during the reign of Richard II in the fourteenth century. Later, the Leventhorpes were created baronets by James I and acquired prominent political and social connections. One member of the family was an executor of Henry V; another married Dorothy, sister of Jane Seymour, the third wife of Henry VIII. On his mother's side he was kin to a brother of the first lord of Sheffield and to John Colet, dean of St. Paul's and a noted reformer. It is from his mother, Mary Collett, that young Leventhorpe derived his forename.

The youngest of three children, he attended Winchester College until age fourteen, then studied for three more years under a private tutor. In 1832, at seventeen, he received a commission from William IV as ensign of the Fourteenth Foot Regiment, Royal British Army. For three years he served in Ireland and in 1835 was stationed in the British West Indies, where he spent several years before completing yet another year of duty in Canada. By now he had attained the rank of captain of grenadiers and had broadened his experience by utilizing his leaves of absence to travel throughout Great Britain and Europe.

In 1842 Leventhorpe resigned his commission in the army and returned to England to try his hand at civilian life. After studying medicine briefly, he sailed in 1843 to Charleston, S.C., on a business trip for a British firm. While thus engaged he went to Asheville, N.C., where he met the charming Louisa Bryan, second daughter of General Edmund and Urcilla Hampton Bryan of Rutherfordton, N.C., who was vacationing in the mountains. Their courtship ended with Leventhorpe declaring his affection for her, but before committing himself to marriage he, on the advice of her father, decided it best to prepare his financial situation in some way other than depending on his annual army pension of $1,200. Accordingly, he returned to Charleston where he entered the Charleston Medical College to finish the studies he had begun in England. On his graduation, he was awarded the college's silver cup, the highest honor given to a student. Leventhorpe immediately returned to Rutherfordton, married Louisa Bryan in April 1849, and settled in that town to practice medicine. In August he became a U.S. citizen, and for years afterwards he and his wife were prominent members of the community.

When North Carolina seceded from the Union at the outbreak of the Civil War, Leventhorpe offered his services to the state and was commissioned colonel of the newly formed Thirty-fourth North Carolina Regiment on 25 Oct. 1861. His experience in the British army had given him valuable insights into the problems of drilling and training raw recruits. Under his rigid discipline, the regiment soon became a very efficient and well-trained command. While in camp around Raleigh, Leventhorpe temporarily had charge of three regiments: his own, the Thirty-third, and the Thirty-seventh. In the spring of 1862 he and his regiment were stationed in the defenses on the Roanoke River at Hamilton to guard against the frequent incursions of Union gunboats on the river which threatened the security of the important Weldon Railroad bridge. On 2 Apr. 1862 he was elected colonel of the Eleventh, formerly the First, or "Bethel," Regiment and stationed at Wilmington. Here several unattached regiments were added to his command to form a brigade of about 3,500 men, serving in the area of Masonboro Sound and in the defenses of Wilmington.

Leventhorpe was in charge of the district of Wilmington until relieved in September by Brigadier General Thomas Clingman. Afterwards he was transferred with his regiment to the Department of Southeastern Virginia, where he commanded a defense line some twenty-six miles in length on the Blackwater River. Relieved of this duty in December by Brigadier General Roger Pryor, Leventhorpe returned to North Carolina with the Eleventh Regiment and served in a small force under Brigadier General B. H. Robertson. On 16 Dec. 1862 this force attempted to check the advance of powerful Union forces led by Major General John G. Foster on a raid inland from New Bern, at Whitehall, on the banks of the Neuse. This was to be Leventhorpe's first experience in battle. His regiment was at first held in reserve until another regiment under Robertson's command was forced to abandon its position on the river bank under a terrible fire of artillery and musketry from Foster's forces on the opposite bank. Ordered forward, Leventhorpe at once reoccupied the abandoned position with his regiment and held it throughout the day under the destructive and galling fire of the Union forces. By the same token, the Eleventh North Carolina responded in kind; one Union officer described it as "one of the severest musketry fires I have ever seen." General Robertson reported: "The conduct of this regiment reflects the greatest credit upon its accomplished and dauntless commander."

By the spring of 1863, Leventhorpe's regiment had become part of Brigadier General James J. Pettigrew's North Carolina brigade and at this time was reported as the best drilled in the service. So efficient was its discipline that in drilling contests among regiments, the Eleventh Regiment was barred. In April Leventhorpe participated with Pettigrew's brigade in the abortive siege of Washington, N.C., and on the ninth was involved in a small engagement near Blount's Mill. Afterwards Pettigrew's forces were transferred to Virginia and joined General Robert E. Lee's Army of Northern Virginia for the invasion of Pennsylvania. On 1 July 1863, the first day of the Battle of Gettysburg, Pettigrew's brigade made a bloody charge against Union forces on McPherson's Ridge; during the charge Leventhorpe, while gallantly leading his regiment, was severely injured. After the ambulance in which he was riding was captured in the subsequent retreat of Lee's army, Union surgeons found his wound to be so serious that they cauterized it with nitric acid; Leventhorpe submitted to the procedure without anesthetics. He was hospitalized at Fort McHenry, near Baltimore, and in early 1864 was transferred to the prison at Point Lookout, Md. Friends in England deposited money for him in a New York bank, enabling him to obtain extra supplies for himself and some of his inmates. After being in Union hands almost nine months, he was exchanged and returned to Confederate service, although he did not resume command of the Eleventh North Carolina.

Leventhorpe was commissioned a colonel of one of North Carolina's two home guard brigades for a brief period before accepting a commission from Governor Zebulon Vance as brigadier general of state troops. He then commanded a large force of Confederate troops in eastern North Carolina and once more helped defend the Roanoke River and the Weldon Railroad. Recognizing his ability as a leader, General Lee commissioned him a brigadier general in Confederate service on 18 Feb. 1865 to rank from 3 February (confirmed 18 February) and ordered him to serve under General Braxton Bragg in North Carolina. For reasons not given, however, Leventhorpe declined this appointment on 6 Mar. 1865. Afterwards, Bragg placed him in command at Raleigh. Following the capture of that city by Sherman's Union troops, Leventhorpe accompanied the retreating Confederate forces towards Greensboro and was there when the surrender was signed at Durham.

Shortly after the war, he and his wife moved to New York and lived there for a number of years. He made several trips to England and worked for the restoration of citizenship rights of former Confederate leaders imprisoned by Federal authorities after the war. Eventually, the Leventhorpes returned to North Carolina and bought Holly Lodge in the Happy Valley region of Caldwell County, near Lenoir. In 1879, after the general's health had begun to fail, they went to live at Fountain, home of Louisa Leventhorpe's sister and husband in the Yadkin Valley, Wilkes County. Ten years later, Leventhorpe died quietly at Fountain.

Leventhorpe has been described as "a notably handsome man, nearly six and a half feet in height, erect and stately in bearing, and gentle as well as brave." Unfortunately, his Confederate service has largely escaped historical notice, chiefly because most of his duty involved the more administrative tasks of district and departmental commands rather than actually leading troops on the field of battle. Leventhorpe had no descendants, and he was buried at the Chapel of Rest Episcopal Cemetery in Happy Valley.

John Wheeler Moore, comp., Roster of North Carolina Troops in the War Between the States , 4 vols. (1882)

War of Rebellion: Official Records of Union and Confederate Armies (1885–1900)