William MacRae, railroad manager, civil engineer, and Confederate general, was born in Wilmington. His family was descended from the clan MacRae from Rosshire on the seacoast of the western Highlands of Scotland, and its members participated in wars from the Crusades to Waterloo. MacRae's father, General Alexander MacRae, was an officer in the War of 1812 and lead a battalion of infantry in the Civil War though nearly seventy years of age; he was also a civil engineer and president of the Wilmington and Weldon Railroad. MacRae's mother was the daughter of Zilpah McClammy. All of MacRae's eight brothers served in the army or navy, and one of them remained with the Union during the Civil War and fought against his brothers and father.

William MacRae was raised in affluence and received a private education. At an early age, he became interested in railroads and did much study in this area. At age sixteen, he left home and took a job with I. P. Morris and Company of Philadelphia, where he learned the trades of locomotive builder and machine operator. He served as an apprentice in these trades until he was twenty-one. He then returned to North Carolina to work in the machine shops of the Wilmington and Weldon Railroad, where he became a locomotive engineer and track boss. Afterwards, MacRae studied civil engineering under his brother, John C., as well as under his father and worked with them in North Carolina, South Carolina, and Florida. 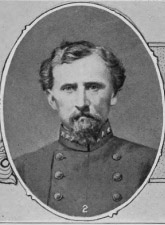 The outbreak of the Civil War found MacRae working as assistant engineer of the Carolina Central Railroad at Monroe. He enlisted in the Confederate army as a private in a company known as the Monroe Light Infantry. This company soon became Company B of the Fifteenth North Carolina Regiment, of which MacRae was elected captain on 1 May 1861. The regiment was ordered to Virginia but was moved back to North Carolina to reinforce General L. O'B. Branch at Goldsboro after the Battle of New Bern. Once again transferred to Virginia, the regiment became part of the brigade of General Howell Cobb of John B. Magruder's (later Lafayette McLaws's) command and saw service in the Peninsular and Seven Days' campaigns. On 2 May 1862, Captain MacRae was promoted to lieutenant colonel of the regiment. On 1 July, the regiment participated in the Battle of Malvern Hill, the closing engagement of the Seven Days' campaign, where 164 out of 600 men were killed or wounded. In the Maryland campaign, the regiment took part in the fighting at Crampton's Gap during the Battle of South Mountain, on 14 Sept. 1862, where another 186 men were either killed, wounded, or captured. In the bloody Battle of Sharpsburg three days later, Lieutenant Colonel MacRae succeeded to the command of the brigade in the absence of General Thomas R. R. Cobb. With the brigade reduced to 250 men, they repelled three attacks of the enemy, and retreated with 50 men remaining and ammunition exhausted.

In the spring of 1864, he participated with Cooke's brigade on the right flank at the Battle of the Wilderness (5–6 May), at Spotsylvania Court House (8–21 May), and at Cold Harbor (June). On 23 June, MacRae was promoted to the rank of temporary brigadier general, to rank from 22 June, and was assigned to the command of the brigade of General William W. Kirkland, who had been wounded at Cold Harbor. This force consisted of the Eleventh, Twenty-sixth, Forty-fourth, Forty-seventh, and Fifty-second North Carolina regiments. One of MacRae's officers said that "he [MacRae] could place his command in position quicker and infuse more of his fighting qualities into his men than any other officer I ever saw . . . [he] changed the physical expression of the whole command in less than two weeks, and gave the men an infinite faith in him and in themselves which was never lost, not even when they grounded arms at Appomattox." MacRae's brigade served in the siege of Petersburg and on 25 Aug. 1864, with the North Carolina brigades of James Lane and John Cooke, took part in the Battle of Reams's Station on the old Weldon Railroad. These brigades attacked and drove the Union II Corps from its entrenchments, capturing flags, nine pieces of artillery, and over two thousand prisoners. The success of the attack was due to General MacRae's choosing to attack without orders. He was again commended by General Lee.

Later, MacRae was given a separate command on the extreme right of the Confederate line near Poplar Spring Church. He commanded his own brigade, Archer's Infantry, a battalion of artillery, and General James Dearing's cavalry brigade. When Union forces attacked Fort Harrison near Richmond, MacRae was ordered to take part of his command and help reinforce Richmond on 30 Sept. 1864. During his absence, Union soldiers attacked and captured the position he had been holding. MacRae returned at 5:00 P.M. on the thirtieth, however, and recaptured part of the lost ground. In the first Battle of Hatcher's Run, or Burgess's Mill, on 27 October, MacRae attacked the Union lines and broke through, capturing a battery. Holding the position until that night, he did not receive reinforcements and ultimately had to retreat from his position. He carried 1,050 men into the action and lost all but 525. On 5 Nov. 1864, MacRae was made a permanent brigadier general, in accordance with a special congressional law of October 1862, to rank from 4 November.

MacRae was not present at the second Battle of Hatcher's Run, during 5–7 Feb. 1865, where some of the Confederate units were badly battered. Of the battle, MacRae's corps commander, General A. P. Hill, said: "Had William MacRae been here, the result would have been different." MacRae's brigade participated in the retreat to Appomattox in April 1865 and was the last brigade to stack arms at the surrender. MacRae had been wounded only once in the war, when he was shot through the jaw, but his sword was shot in half on two occasions and his hat and clothing were pierced by bullets and shell fragments many times.

In January 1866 after the war, he returned to North Carolina and was appointed general superintendent of the Wilmington and Manchester Railroad. He later managed the Macon and Brunswick Railroad. Having returned from the war impoverished, these businesses helped reestablish his financial security.

In 1873, MacRae became general superintendent of the Western and Atlantic (State) Railroad of Georgia. His health began to deteriorate as a result of overwork and exposure. Finally, he resigned his position and went to Florida, hoping the warm climate would help his condition. His lung disease was too far advanced, and left for Wilmington, where he wished to spend his last days. While stopping at a hotel in Augusta, Ga., he was seized with a congestive chill, usually the result of pneumonia, and died at forty-seven. His remains were returned to Wilmington for burial in Oakdale Cemetery.

Charles Manly Stedman, Memorial Address on the Life and Character of Gen. William MacRae, with an Account of the Battle of Reams' Station [1890].