Thomas Jenkins Pearsall, legislator, attorney, businessman, and farmer, was born in Rocky Mount, the son of Leon F. and Maryetta Jenkins Pearsall. He was educated in the public schools of Rocky Mount until his senior year in high school, when he went to Georgia Military Academy for the year 1922–23. He entered The University of North Carolina, in the fall of 1923 and the law school two years later; he was graduated in 1927 and began to practice law in Rocky Mount. Pearsall's first venture into politics in 1928 resulted in his election as solicitor of the local Recorder's Court, a post he held until 1933. In 1940 he was appointed to the legislative seat vacated at the death of the incumbent, William E. Fenner, two days after he had been elected to his fourth term. Thereafter Pearsall was elected to three successive terms, serving a total of four terms from 1941 until 1947; he was speaker of the state house of representatives in 1947. 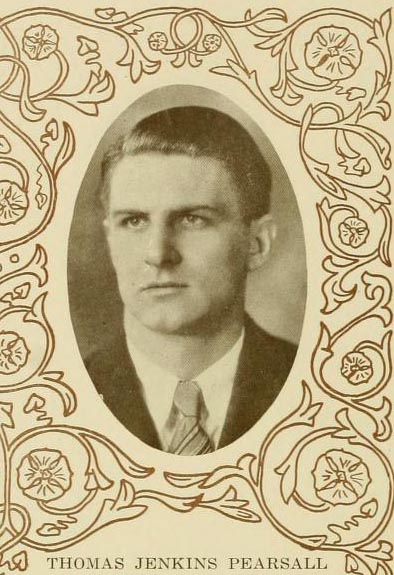 Following the U.S. Supreme Court decision in the case of Brown v. Board of Education in 1954, Governor William B. Umstead named a Special Advisory Committee on Education of which Pearsall was chairman. This committee recommended "that North Carolina try to find means of meeting the requirements of the Supreme Court's decision within our present school system before consideration is given to abandoning or materially altering it." In March 1955 the General Assembly adopted a pupil assignment plan affirming that local school boards had power over the enrollment and assignment of children in the public schools. In July 1956 a special session of the General Assembly adopted the "Pearsall Plan" embodying in a constitutional amendment provisions for paying education expense grants from state or local funds for the private schooling of children assigned against the wishes of parents or guardians to an integrated school. Reaction was mixed, no tuition money was granted, and in 1966 the Pearsall Plan was declared to be unconstitutional, although it had not been used in a single school system. The plan, however, is often said to have softened the blow and to have enabled the state to carry out desegregation with "a minimum amount of tension."

Pearsall was active in the reorganization of the consolidated University of North Carolina as well as the establishment of North Carolina Wesleyan College at Rocky Mount. He was chairman of the board of the Roanoke Island Historical Association, a member of the board of governors of the Research Triangle Institute, and a trustee of the Children's Home Society, the Rocky Mount public schools, and the Asheville School for Boys. He also managed the M. C. Braswell Company (inherited by his wife), which held 22,000 acres in Nash, Edgecombe, Martin, and Halifax counties devoted to farming, timber production, and a warehouse enterprise. It was through this connection that he became active in the American Farm Bureau and the American Farm Managers Association; in addition, he was president of the Citizens Savings and Loan Association in Rocky Mount and a director of the Planters National Bank and Trust Company. He often was mentioned as a candidate for governor but declined to give it serious consideration.

In 1930 Pearsall married Emily Elizabeth Braswell and they became the parents of two sons, Thomas J., Jr., and Mack Braswell. He was a member and sometime senior warden of the Church of the Good Shepherd in Rocky Mount and was buried in Pineview Cemetery.