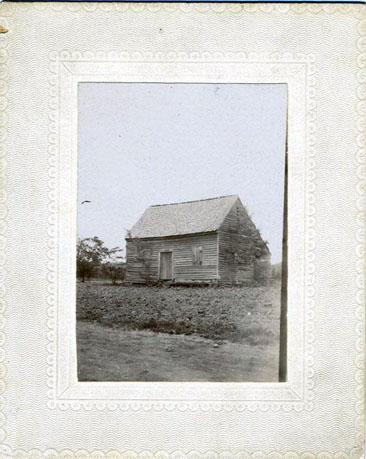 Thomas Person, philanthropist, surveyor, sheriff, justice, landed proprietor, member of the General Assembly and Provincial Congress, and brigadier general in the American Revolution, was born in Surry County, Va., and moved to North Carolina with his parents, William and Ann Person. Thomas grew up in Granville (present-day Warren) County and established his seat at Goshen in Granville; he spent his entire life in the Warren-Granville area.

Early in his career Person became a surveyor for Earl Granville. He was noted for the accuracy of his surveys and commitment to his work and, as he became acquainted with the best lands, he was able to accumulate a handsome estate. In 1788 he listed for taxation 82,358 acres in Granville, Halifax, Warren, Franklin, Orange, Caswell, Guilford, Rockingham, Anson, and Wake counties, N.C., and in Davidson, Sumner, and Greene counties, Tenn. On 24 June 1765 he married Jeanna Thomas (b. 15 Sept. 1739). She died after 1810, when Granville County records show a deed of gift from Jeanna Person to John W. Philpott (whom she had appointed in September 1805 as her attorney to collect all debts due her). Thomas and Jeanna Person had no children.

The first record of Person's appearance in public life is on 6 July 1756, when at age twenty-three he was recommended as a justice of the peace for Granville. Thus began a long and illustrious life of public service, which included being sheriff of Granville County (appointed 1762) and representing Granville in the General Assembly (first in October 1764) almost continuously for thirty years.

He was a member of all provincial conventions and congresses, which took the place of the Assembly from 1774 to 1776, and served on the most important committees, including those that drafted the Bill of Rights (of its twelve clauses for the protection of individual rights, eleven were embodied in the first ten amendments of the U.S. Constitution) and the state constitution (which remained in force for fifty-nine years without change). On 9 Sept. 1775 Person was chosen to serve on the Provincial Council—the executive head of the state. He and Willie Jones of Halifax were of the more progressive element, which favored a simpler government more directly responsible to the people. He also served on the Council of Safety, which replaced the Provincial Council.

One of his important services to the state was as a leader of the Antifederalist party in the convention of 1788, which was called to consider the federal constitution. This party was ultra-democratic and advocated a federal government of limited power in order to protect the interests of the states against the centralizing tendency evident in the new constitution. Person feared the federal power to tax, and although the new constitution was adopted at the Fayetteville convention in November 1789, Person, "true to his convictions and game to the last, voted nay."

His most valuable service was as a member of the General Assembly for some thirty years. There he was always an Argus-eyed guardian of the rights of the people; no form of what he thought injustice, illegality, or graft could escape his sharp eye or pass without protest. He was especially quick to attack whatever savored of injustice or class legislation. He served on the most important committees, usually as chairman. In 1784 he was chairman of the whole. Some of the committees on which he served were concerned with public accounts, military matters, privileges and elections, finance, propositions and grievances, depredations of Tories, manufacture of iron, defense, location of the capital, affairs of the North Carolina Continental Line, paper money, revenue, Indian affairs, raising regular troops and regulating the commissary department, bills of attainer, debts due to and from the public land grants, vesting power in the Continental Congress to levy duties, claims and depreciation, trial of impeachment, proposed revision of the constitution, the Virginia boundary, and confiscated property.

An individual of prominence, such as Person, was, of course, envied and criticized. Such was the case when John Ashe accused him of perjury in the Assembly in 1769. When Person was tried at the December 1770 session, the investigating committee, headed by John Campbell, reported that "there is not any one of the charges or allegations—in any matter supported," but that they were exhibited "through malice and envy, with design to injure the character and reputation of the said Thomas Person." It was ordered that this report be published in the newspaper of the day.

When abuse by colonial officials led to the Regulator movement in North Carolina, Thomas Person was one of the leaders in this effort to secure redress of grievances from the government. Although he did not participate in the Battle of Alamance, he was seized on the order of Governor William Tryon and imprisoned at Hillsborough in the care of the Reverend George Micklejohn. Realizing that certain papers at home would incriminate him if found by Tryon, he promised his jailer he would return by daybreak if he were permitted to leave during the night. Person was considered a man of such honor that Micklejohn consented to his request, and he was soon on his way to Goshen, his home in Granville County. There he secured his bonds and money in a brick kiln, removed from his desk stacks of papers, which he burned, and managed to return in time to keep his promise to the clergyman. The following morning his estate was invaded by Tryon's troops, who hacked open his desk (this historic desk is now owned by The University of North Carolina) but discovered no evidence; instead, they found only ashes of the papers they had hoped to seize. The soldiers hurried to Hillsborough and questioned Micklejohn concerning whether Person had left the prison the night before. Micklejohn's reply was, "I supped and breakfasted with him."

It is said that Person was among those most feared by Tryon and that when amnesty was offered to the Regulators who would take the oath of allegiance to the king, he and a few others were excepted. During the three weeks when he was in irons in Hillsborough, he was marched to the gallows and back again. Surviving this experience, he became one of the early leaders in the American Revolution and was appointed brigadier general on 22 Apr. 1776.

Stephen B. Weeks states that by sheer weight of character alone, General Person made himself a necessity to the colony. According to Weeks, when on 12 Apr. 1776 at Halifax, North Carolina became the first colony to make a formal proposal for a declaration of independence, this proposal—though evidence will not be found to settle this point beyond dispute—was as much the work of Thomas Person as of any other man. No student of North Carolina history, Weeks maintains, will dare to claim that such an honor could belong by right of work done to any other man or that any other citizen of the state was more worthy of this great and signal honor.

Person, a man of wealth, was generous with his fortune and promoted education. During the war he placed his property at the service of the state. He loaned Governor Thomas Burke $50,000, "to be replaced or paid by warrant which I did not issue." He assisted in securing a charter for The University of North Carolina in 1789 and was a member of its first board of trustees (1789–95). Though the university had been chartered, no money had been provided by the state and an effort was being made to open its doors to students. Person made substantial donations at a time when hard money was almost unattainable. Person Hall at The University of North Carolina was named in his honor, as were streets in Raleigh and Fayetteville, and Person County. It is believed that Person's ordinary was built by him and was in operation on or before 1764 (in that year he obtained a "lycense" to keep an ordinary at Butterwood in Bute County). It was restored by the Littleton Woman's Club.

He died in Franklin County at the home of his sister Martha (wife of Major Francis Taylor) while on his way from Raleigh to Goshen. He was buried at Personton on Hub Quarter Creek in Warren County, now covered by the waters of Lake Gaston.

I am a Person family

I am a Person family descendant and visited UNC to research. The desk I have seen in old photos and I believe it is probably in safe storage somewhere. I will research this further and reply if I am able to find it.

Finally researching my family’s lineage and Person was a great great ... uncle and I grew up hearing amazing stories of him. Until this article I wasn’t sure how much truth there was in the stories I was told but the man was pretty amazing. Def going to check out that desk next time I’m at UNC

FYI as to my inquiry about

FYI as to my inquiry about Thomas Person's desk at UNC: Professor Watson at the History Dept. advised me the desk is on display at the Hill Alumni Center on Stadium Drive (on campus). Thank you for your assistance!

Wonderful sleuthing! Congratulations on tracking it down. I am very glad to hear that it is indeed still on campus.

I am a relative of Thomas

I am a relative of Thomas Person through my mother's family. In the NCpedia article above about Person there is a reference to Person's desk that was forcibly open by Gov. Tyron's troops during the Regulator Movement, and says the desk is owned by UNC. I attended UNC, but was unaware of the desk. Can the desk be viewed and where is kept? Person Hall? Can you provide details or a contact at the school? Thank you! -Lewis Young

I have inquired too and have

I have inquired too and have seen pictures as well. I'll research this and send you a message. Also, I have visited the Person Hall structure and it is in very good condition.