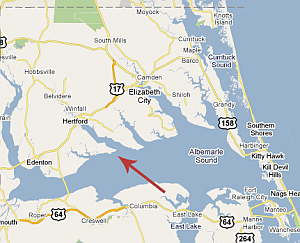 Thomas Harvey (d. 1699) was a long time colonial official who became the second deputy governor of North Carolina following the death of Governor Thomas Jarvis in 1694. He served on the colonial council from 1683 to 1695, serving as its president for his last four years. Harvey was the son of John and Mary Harvey of Snitterfield Parish in Warwickshire, England and the cousin of John Harvey, governor of Albemarle County. Harvey was residing in Albemarle by 1670. In 1682, Harvey married Governor John Jenkins’ widow Johanah and, upon her death, married Sarah Laker. Harvey resided at Harveys Neck, a peninsula formed by the Perquimans and Yeopim Rivers.

Harvey evidently began his public service career in about March 1683 as a county court justice. By February 1684, he was serving as a member of Governor Seth Sothel’s council. Harvey was president of the council under Governors Thomas Jarvis and Philip Ludwell. By the fall 1694, Ludwell had left North Carolina leaving Harvey as acting chief executive. John Archdale, who became the governor of the Carolina province in 1694, made Harvey the permanent deputy governor when he arrived in North Carolina in the summer of 1695.

As deputy governor, Harvey and his council faced challenges in governing. Issues involving land ownership had to be addressed. Harvey had to straighten out land titles that were in disorder due to Governor Seth Sothel. Harvey and his council also had to enact the proprietors’s liberal land policies. Completing government reorganization that was authorized by the proprietors in 1691 was another task. By the time of Harvey’s death in 1699, many changes had been made to the government, including conversion of the unicameral Assembly to a bicameral body, increased participation in legislative action by the elected members of the Assembly, extension of the suffrage to include all freemen, and reorganization of the court system. As colonists settled beyond the original Albemarle County boundaries, the government found it necessary to create another county, Bath in December 1696.

Unlike his predecessors, Harvey faced hardly little discord from the colonists. External problems created the major challenges to the deputy governor. Harvey wrangled with the royal government on the issue of control over proprietary colonies. Virginia officials aided London in trying to gain control over Carolina. In addition, tension between North Carolina and Virginia increased because of a disputed boundary and other issues.

Harvey died on July 3, 1699 as a result of “continual sickness.” The stress of performing his duties was a possible factor contributing to his death. In a July 1698 letter, Harvey complained to Provincial Governor John Archdale about how dealing with matters has strained his health, appealing for help in dealing with the situation. Harvey died leaving a widow with two young children ages six and four.