Part 2: The Literary Fund, the Education Act, and the Growth of Common Schools 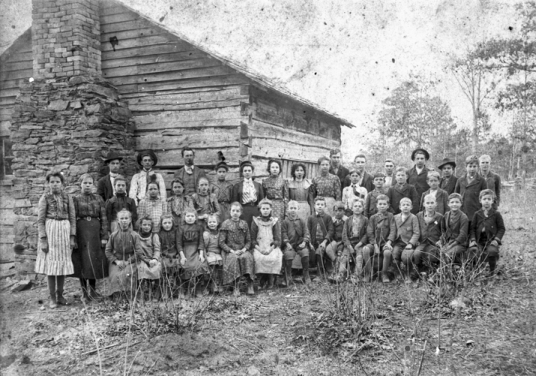 Although the North Carolina Constitution of 1776 referred to the education of the new state's youth, it essentially provided for only the establishment of the University of North Carolina in Chapel Hill (which did not open until 1795). All existing schools and academies during this period were privately supported, often by churches and generally for the purpose of educating the children of affluent parents. A statewide system of public schools was first proposed around 1817 by state senator Archibald D. Murphey of Orange County. In 1825 the State Literary Fund was created to support such a system, but the fund was inadequate until supplemented in 1836 by a federal surplus of $1.5 million-the bulk of which went toward the Literary Fund and public education.

The Education Act passed by the General Assembly in 1839 and revised in 1841 created North Carolina's earliest public school system, which lacked statewide standards and at first produced widely varying results. The state's first "common" school opened in Rockingham County in January 1840. Over the next decade thousands of other schools opened across the state after a statewide referendum on public schools in August 1839 won the approval of voters in 61 counties; the remaining 7 counties joined the statewide movement by 1846. Initial funds for common schools were provided from the Literary Fund and a mandatory local tax. These moneys generally paid the salary of a schoolteacher for no longer than two to three months a year, although some districts operated schools for up to nine months. Children of all ages were educated simultaneously. Each school district was initially entitled to an allocation of $40 per annum from the Literary Fund if it agreed to provide a school building for 50 students and raise an additional $20 in local taxes. But political pressures almost immediately made the local tax voluntary and changed the formula to favor eastern counties with large slave populations.

After 1841 the Literary Fund's proceeds were distributed to counties on the basis of the federal population, in which slaves were counted as three-fifths of a white person. Although slaves were not entitled to public education, their sheer numbers inflated allocations to eastern counties at the expense of western counties with far fewer slaves; this formula remained in effect until the 1850s. Some districts chose not to impose a local tax, while others failed to spend all of their Literary Fund appropriations. Public apathy and the unpopularity of the local tax threatened to undermine the school system in many counties.

By 1850, 2,657 common schools employing approximately 1,500 teachers offered primary education to more than 100,000 white schoolchildren in North Carolina. In the antebellum era, educational opportunities for slaves and free blacks were severely limited. It was illegal to teach blacks to read and write, though some learned basic reading skills through illicit lessons by whites or by managing to gain the knowledge on their own. In some instances, private organizations, such as those run by the Society of Friends (Quakers), were established for the education of former slaves and free blacks.

Public schools received a boost in 1852, when the Democratic General Assembly created the post of state superintendent of common schools to head the Department of Public Instruction. Calvin H. Wiley, a Guilford County lawyer and legislator, served as the first superintendent from 1853 to 1865. Under Wiley's energetic leadership, the common schools quickly improved. His notable accomplishments included establishment of the first system of examinations and certification for teachers; formation of county institutes to train teachers; standardization of textbooks, including his own North Carolina Reader (1851); and enforcement of the state law requiring regular reports from local school districts. North Carolina's common schools are considered to have been among the best in the South in 1860.

Annals of Progress ( The

Annals of Progress ( The Story of Lenoir County and Kinston NC) - 1963) by William S. Powell, indicates on Page 82 that Lenoir County had 31 school districts for white children and 28 for Negroes. I cannot locate any source or map for this information. Need help if anyone can provide documentation.