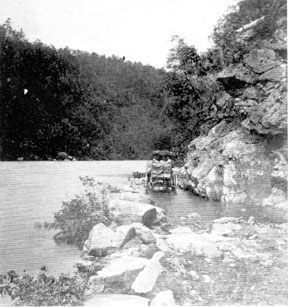 modestly to the development of transportation in the state. With the notable exception of the Buncombe Turnpike, inadequate financing, local and political rivalries, ineffective administration, and the eventual effects of railroads combined to limit the economic and commercial impact of most turnpikes.

Interest in turnpikes began after the War of 1812, when visionary state leader and jurist Archibald D. Murphey championed them as a way to link the western counties with river ports. He called for a turnpike to be constructed from the north fork of the Catawba River in Burke County to the Yellow Mountain on the Tennessee border and for another to run from Raleigh to a convenient terminus on the Neuse River. The state's experiment with turnpikes began in 1818, when the General Assembly authorized the Plymouth Turnpike Company. Four years later it amended this act when it gave the company permission to dig a canal in conjunction with the turnpike, which was to link Pungo Creek in Hyde County with Plymouth in Washington County; however, the company never finished the project. Meanwhile, Horton's Turnpike opened, running from Wilkesboro on the Yadkin to Deep Gap, then through southwestern Ashe County and on to Jonesborough. Built without state aid, this road was badly designed, poorly built, and inadequately maintained.

In the 1820s the legislature endorsed Murphey's internal improvements program and appropriated money for the construction of roads from Rutherfordton to Asheville, Jefferson to the Tennessee line, Old Fort to Asheville and Huntsville, and Surry County to the Virginia line, as well as for the Tennessee River Turnpike, Plymouth Toll Road, and Buncombe Turnpike. The Buncombe Turnpike, which connected Greenville, S.C., with Greeneville, Tenn., via the Saluda Gap, Asheville, and Warm Springs, N.C., was completed in 1827; it became one of the few state-financed internal improvement projects to pay dividends. In the late 1820s it was the longest (about 75 miles), finest, and most traveled highway in the state, becoming the major route from Kentucky and Tennessee to South Carolina and Georgia for enormous herds of cattle, horses, mules, and hogs.

Sectional and partisan jealousies severely undermined efforts to duplicate the success of the Buncombe Turnpike. Throughout the 1840s, eastern Whigs repeatedly defeated attempts to appropriate state funds for a turnpike from Raleigh west to the Tennessee line. Finally, in 1854 the General Assembly approved the construction of the Western Turnpike, which ran through Buncombe County from Asheville across the French Broad River to Waynesville, Webster, Franklin, and Murphy, then west to Ducktown, Tenn., across the Stansbury Mountain chain. Among other turnpikes, the most prominent linked Salisbury, Lincolnton, and Rutherfordton. In the 1850s the state incorporated a number of lesser turnpike companies, including the Jonathan's Creek and Tennessee Mountain, Pigeon River, Tuckasege and Keowee, Qualla Town and Oconaluftee, Tuckasege and Nantahala, Macon County, and Cheoih Turnpikes.