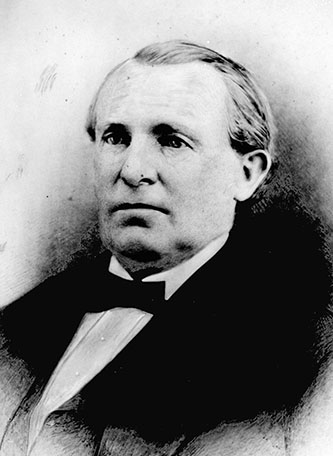 Curtis Hooks Brogden, governor and member of Congress, born on a small farm in Wayne County, was the son of Pierce Brogden and Amy Bread Brogden. As with most North Carolina farm boys of the time, his opportunity for formal education was limited, but Brogden diligently supplemented what he learned in the common schools with personal reading.

In 1838, before Brogden was twenty-two years old, he announced himself a Democratic candidate for the state legislature from Wayne. The youngest member elected to that session of the state house of representatives, he was to hold political office almost continuously for the next forty-one years. After seven terms in the lower house of the General Assembly, he ran successfully for the state senate in 1852, 1854, and 1856. The legislature in 1857 elected him state comptroller, a post he held for ten years, continuing in office through the crises of secession, Civil War, and Emancipation.

A staunch Jacksonian before the war, Brogden cast his first non-Democratic vote in 1862, when he supported nonpartisan Zebulon B. Vance for governor. He moved into the Republican party after the war, and as a supporter of Reconstruction he was once again elected to the state senate in 1868. In the same year he served as Republican presidential elector. Reelected to the state senate in 1870, he voted for acquittal in the impeachment trial of Governor William W. Holden.

The state Republican convention nominated Brogden for lieutenant governor in 1872, and with his running mate, Governor Tod R. Caldwell, he was elected by a margin of two thousand votes. When Caldwell died 10 July 1874, Brogden became governor, only a few weeks before his party suffered severe losses in the state legislative elections.

During his two-and-a-half-year tenure as governor, Brogden faced a strongly Democratic legislature. Fewer than one-third of the members in either house were Republicans. This Republican weakness, combined with Brogden's genial, unassuming personality, produced an administration less aggressively partisan than Governor Caldwell's. As chief executive, Brogden supported the policy of consolidating the state's railroad holdings and approved efforts to adjust, but not repudiate, the state debt. He placed a high value on education, even arguing unsuccessfully for the establishment of a Negro college.

Instead of seeking to succeed himself as governor in 1876, Brogden campaigned for a seat in Congress from the Second Congressional District, a heavily Negro district that included Wayne County. He defeated several rivals for the Republican nomination, including the incumbent representative, black politican John A. Hyman. Since the district was a Republican stronghold, he was easily elected, while still governor, in the November general election.

Although he had a reputation as a facile, flowery orator in North Carolina, Brogden was a quiet representative in Washington. He worked to gain internal improvements for his state and reduced internal revenue taxes. He also advocated direct presidential elections and pensions for Mexican War veterans. His vote with the Democratic majority for the army reorganization bill was unpopular with his Republican constituents.

Brogden was not renominated in 1878, a year of intense rivalry among second district Republicans. Amid charges of fraud, Democrats narrowly elected their nominee, William H. Kitchin. Two years later Brogden tried to regain a place in Congress. After many Republicans disputed the outcome of the turbulent regular convention, he issued a broadside declaring himself an independent candidate against the convention nominee, a northern immigrant named Orlando Hubbs. Brogden called for reduction in the tariff and other taxes and accused Hubbs of not representing the interests of the South. But his efforts collapsed when Republicans closed ranks in response to the entry of a third, Democratic candidate into the race. Wayne County was transferred to the Third Congressional District before Brogden's next campaign for Congress. In 1884 he was nominated, only to be defeated in the general election by Wharton J. Green, a Democrat.

Brogden won his last victory in 1886, running, as in his first campaign nearly fifty years earlier, for the General Assembly. In a house controlled by Republicans and independents, he spoke in favor of changing the centralized, indirect system of county government the Democrats had instituted ten years before in order to "save" Eastern North Carolina from "Negro rule." The house passed a bill changing the system, but the senate rejected it. Brogden was not reelected in 1888.

A lifelong bachelor, Brogden was a temperate man who used no tobacco and seldom drank. His habits were simple, his affections local and provincial. He rarely traveled beyond the boundaries of his native state. Through frugality he became one of the largest landowners in Wayne County.

Brogden died at the age of eighty-four and was buried in Willowdale Cemetery, Goldsboro.

Address of Hon. C. H. Brogden, to the Voters of the Second Congressional District of North Carolina [1880].

Speech of Hon. C. H. Brogden Delivered before the Wayne County Republican Convention at the Town Hall in Goldsboro, N.C., Saturday, May 29, 1880.