Benjamin Hickman Bunn, congressman, was the son of Redmund Bunn of Nash County and his wife, Mary Hickman Bryan. The Bunn family had long been prominent in Nash County, and members were among the pioneer settlers around the Falls of the Tar River. Bunn was educated at the Rocky Mount Academy and was preparing to enter The University of North Carolina when the Civil War broke out. He enlisted in the Confederate Army at age seventeen and served throughout the war. Entering the army as a first lieutenant in the Thirtieth North Carolina Regiment, Bunn later served in the Forty-seventh North Carolina Regiment and, toward the end of the war, was captain of a company of sharpshooters. He was twice wounded, once at Gettysburg and again before Petersburg, in 1865. His two brothers, William Henry and Elias, who were also in the Confederate Army, died in service.

At the conclusion of the war, Bunn read law under his uncle, William T. Dortch, in Goldsboro; he received his license in June 1866 and his superior court license a year later. Gifted with a quick mind and good memory, he was a forceful advocate and appeared in almost every important case tried in Nash County during the next forty years. He served as county attorney for thirty years and was attorney for the Atlantic Coast Line Railroad for much of his professional career.

Largely at the instigation of Bunn, the Rocky Mount depot was incorporated as a town by the legislature in 1867, and he was elected the first mayor. He was elected a member of the constitutional convention of North Carolina in 1875 and rendered important service as secretary of the Committee on Privileges and Elections. Elected to the General Assembly in 1882, he was appointed chairman of the joint committee on the code. 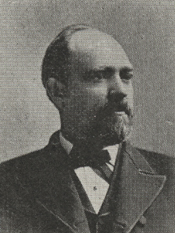 Bunn was elected to represent his district in Congress in 1888 and served for three terms. He was given the chairmanship of the Committee on Claims and in this capacity performed competent legislative service, examining claims and drawing up reports for action by Congress. In his report on the bill for the relief of J. M. Lanston, he set forth the expenses of every contested election since the organization of Congress. Bunn's speech on the Federal Election Bill, setting forth the southern thought on sectionalism, was widely circulated, and parts of it were inserted in the Democratic handbook for the next campaign.

After retiring from Congress, Bunn was postmaster of Rocky Mount from 23 Apr. 1895 until 27 July 1897. He served for a time as president of the Rocky Mount Mills and was so acting when its management started the company on its modern era of development. He was also interested in progressive farming.

Bunn died at his country home, Benvenue, several miles northwest of Rocky Mount, and was buried in Pineview Cemetery.

Benevue application for the National Register of Historic Places: http://www.hpo.ncdcr.gov/nr/NS0011.pdf