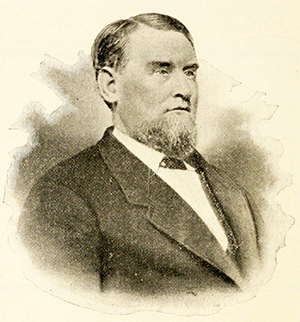 David Miller Carter, Confederate officer, legislator, and attorney, the son of David Carter and his wife Sarah Lindsay Spencer, was born in Fairfield, Hyde County. His father was a prosperous planter and landowner and sent his son to the Lovejoy Academy in Raleigh and to The University of North Carolina. Carter was graduated from the university in 1851 as an honor student and remained in Chapel Hill an additional year to continue study with the professor of law, William H. Battle. He began practice in Washington, Beaufort County, in 1852, as a partner first of Richard H. Donnell and later of Edward J. Warren. He quickly built a successful legal practice and in addition served as solicitor for the state in his judicial district.

In politics, Carter was a Unionist Whig, but in spite of his opposition to secession he entered the Confederate Army in May 1861, with a commission as captain of Company E, Fourth North Carolina Infantry. He was severely wounded in the right arm at the Battle of Seven Pines on 31 May 1862. Although he was promoted to lieutenant colonel of his regiment, to rank from 19 June, the slowness of his recovery prevented his serving and caused his resignation in December 1862. He was then appointed a judge of the military court, with the rank of colonel, and served first on the court of the Second (Jackson's, later Ewell's) Corps, and later as presiding judge of the Third (A. P. Hill's) Corps.

In the meantime, Carter had been elected to represent Beaufort County in the 1862–63 session of the lower house of the General Assembly of North Carolina. He was given leave of absence from the army during his legislative session; when he was reelected to the legislature in 1864, he resigned his army commission. He wrote in 1863 that peace could be made only by military decision, and as a soldier he supported the military aims of the Confederacy. As he viewed the developing situation from the perspective of a legislator, however, he began to support the idea of a negotiated peace. He urged concessions in the enforcement of conscription and tax laws for his neighbors in Beaufort and Hyde counties, who were frequently subjected to raids from the two armies, and he was a leader in opposing the suspension of the writ of habeas corpus. In January 1865 he was a member of a delegation chosen by the legislature for a secret mission to Richmond, in an effort to persuade the Confederate government to open negotiations for peace.

At the close of the war, Carter wrote that he was one of those "who served the Confederacy with fidelity, while it existed, and are now prepared" to yield to the United States "a loyal allegiance." He received an early pardon and was appointed solicitor by Provisional Governor William W. Holden. For more than a year he cooperated with Holden, his friends John Pool and William B. Rodman, and others who were seeking reconstruction of North Carolina under a leadership opposed to former secessionists. In September 1866 he attended the Unionist meeting in Raleigh that led to the formation of the Republican party in the state. Yet he was no bitter partisan; he was consulted by former Governor Zebulon B. Vance soon after the end of the war, and he maintained friendships with opponents of the Radical Republicans. He was alienated by congressional Reconstruction, and in November 1867, in a letter to John Pool that he gave to the newspapers, he opposed the call of the constitutional convention required by the First Reconstruction Act. In 1868 he was told that the Republican party of the state would request removal of his disabilities if assured of his support, but he refused to commit himself to the party and soon thereafter began to cooperate with the Conservatives. In 1872 he was nominated for election to Congress by the Democratic-Conservative party; he campaigned actively but unsuccessfully against the incumbent, Clinton L. Cobb.

Early in 1874, Carter moved his family to Raleigh. He continued to practice and to attend courts in his old circuit, where he had large holdings of farm and timber lands. He had a busy legal practice both in Raleigh and in his former circuit and was active in public affairs as a director of a bank and an insurance company, a member of the commission to build a new governor's mansion, and president of the board of directors of the state penitentiary. He was also a leader in the movement to reopen The University of North Carolina and cooperated with the new president, Kemp P. Battle, whose political course had been somewhat similar to his.

Carter died in Baltimore, apparently as a result of a heart condition that had afflicted him for about a year. He was a member of the Protestant Episcopal church, and his body was returned to Raleigh for a funeral service in Christ Church and burial in Oakwood Cemetery, which he had been a leader in founding.

Carter was married twice, the first time to Isabella Perry, daughter of David Bradley Perry of Rosedale, near Washington, N.C. She died in 1866, and in May 1869 he married Mrs. Harriet Armistead Ryan Benbury, widow of John A. Benbury of Albania, near Edenton. The daughter of John Jordan Ryan and Emily Turner and the stepdaughter of David Outlaw, she grew up in the Outlaw home in Windsor. Carter was survived by two children of his first wife, Sarah Lindsay and David M., Jr., and two of his second wife, Laura Lindsay and Frances Spencer. Although Carter always signed his name David M. or D. M., he was known familiarly as Miller.