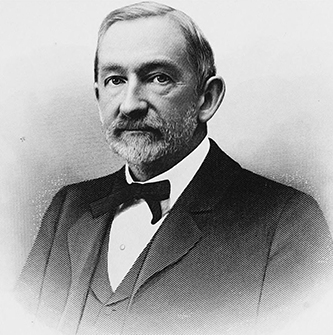 Junius Davis, lawyer, was the son of George Davis, a lawyer, orator, and attorney general of the Confederate States, and Mary Adelaide Polk Davis, the daughter of General Thomas G. Polk of Mecklenburg County and granddaughter of Colonel William Polk of Raleigh. Junius Davis was born in Wilmington at the old Davis family home on Second Street. He attended schools taught by Levin Meginney and George W. Jewett until he was twelve, when he enrolled in the Bingham school at the Oaks, twelve miles southwest of Hillsborough. He studied there for four years until his education was cut short by the Civil War.

At the beginning of the war the Davis family moved to Charlotte. In 1863, at age seventeen, Junius Davis enlisted as a private in the Confederate Army, serving with Company E, Tenth North Carolina Regiment, commanded by Captain Alexander D. Moore. The battery that served with General Hoke was officially named the "Wilmington Light Artillery," but became known as "Moore's Battery" and later "Miller's Battery" when Moore resigned in 1863 and Captain John Miller took command. In 1864 the battery was ordered to Virginia and attached to a battalion commanded by Major N. S. Moseley. Davis was promoted to corporal and served in the battles of Drewry's Bluff and Bermuda Hundred, the attack on Fort Harrison, and the final days of fighting around Petersburg where he was slightly wounded in the neck the last day in the trenches. He continued on duty while his battery was part of the rear guard in the retreat to Appomattox. The Confederate soldiers drove back an advance of Sheridan's cavalry from their position about one mile from Appomattox, but later a surprise attack captured some of their guns and drove Davis and several others into the woods. The next day they were informed by an officer of McGregor's Mounted Battery that General Lee had surrendered. Unable to document the information, Davis and the two men with him proceeded to Lynchburg where they were advised to go home, subject to being recalled to active duty. Davis then attempted to reach Johnston's army but learned at Greensboro that Johnston had also surrendered. He surrendered himself to the federal provost marshal in Greensboro and was paroled.

Returning to Charlotte, Davis was hired to accompany railroad cars of cotton from Charlotte to New Bern. In the fall of 1865, at age twenty, he returned to Wilmington and worked as a clerk in the dry goods store of Weil & Rosenthal. His father, who had attempted to escape to British territory, was captured and imprisoned for several months; when paroled he returned to Wilmington and resumed his law practice. In 1867 Junius Davis resigned his clerkship to study law in his father's office and was admitted to the bar in the spring of 1868. He was associated with his father in the firm of Davis & Davis until the elder's death in 1898. Clients included the Atlantic Coast Line Railroad Company for which Davis served as division counsel, the Consolidated Railways, the Light and Power Company, and other corporations. He was president of the Wilmington Railroad Bridge Company.

Although an active Democrat, Davis never sought political office. In the riot at Wilmington in 1898 he was a member of the committee that directed events in the racially troubled town, his efforts leading to Governor Daniel L. Russell's decision that there should be no Republican opposition to the election of the citizens' candidates.

History, especially that of the Cape Fear region, interested Davis. He served on the advisory board for Samuel A. Ashe's Biographical History of North Carolina and supplied information for some of the sketches. He also published a number of articles including one on Locke's Fundamental Constitutions and another on John Paul Jones, published first in the South Atlantic Quarterly and later in pamphlet form. The article, entitled "Some Facts About John Paul Jones," was thought at the time of its publication to settle the dispute over how Jones acquired his name.

On 19 Jan. 1874 Davis married Mary Orme Walker, daughter of Thomas D. and Mary Vance Walker. She died some years later, and on 6 Nov. 1893 he married Mary Walker Cowan, daughter of Colonel Robert C. Cowan of Wilmington. He had eleven children; his son, Thomas W. Davis, became an attorney and a member of the Davis law firm.

Davis, Junius. "Alfred Moore and James Iredell, revolutionary patriots, and associate justices of the Supreme Court of the United States: An address delivered in presenting their portraits to the Supreme Court of North Carolina on behalf of the North Carolina Society of the Sons of the Revolution." Raleigh [N.C.]:The Society. 1899. http://books.google.com/books?id=yfMEAAAAYAAJ&lpg=PA3&ots=jAXCzQQWSF&pg=PP7#v=onepage&q&f=false