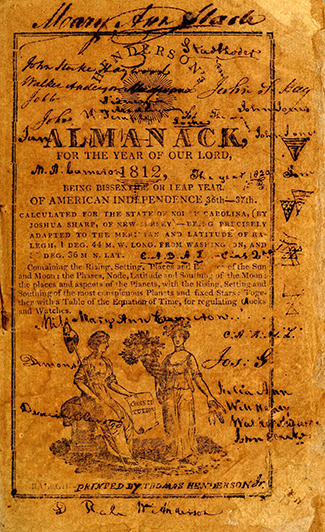 Thomas Henderson, Jr., Raleigh editor, was born in Rockingham County. His father was Thomas Henderson, Sr. (1752–1821), a county clerk in Guilford and Rockingham counties; and his mother was Jane Martin Henderson, a sister of Governor Alexander Martin. After receiving a common school education, he entered the printing profession. From early October 1806 until early March 1807, he printed the North-Carolina Journal for the heirs of Abraham Hodge at Halifax.

Shortly afterwards Henderson moved to Raleigh, where he formed a partnership with Dr. Calvin Jones to publish the Raleigh Star. Announcing their intentions with a notice in the rival Raleigh Register, the prospective editors said they "would attempt to pursue a firm yet liberal line of conduct, often giving facts, more seldom opinions, and those ever so candid and dispassionate; solicitous always to stifle the baneful spirit of faction, and looking with a single eye to the happiness and honour of United America." The first issue of the Star appeared on 3 Nov. 1808. After a year or so, Jones apparently withdrew as co-editor while remaining a financial partner. The issue of 20 Apr. 1809 stated that it was published by Thomas Henderson, Jr., "for self & company," whereas the issue of 3 Jan. 1812 said it was published by "Thomas Henderson, Jr." A 13 Feb. 1815 notice in the Star announced the dissolution of the partnership effective 1 Jan. 1815, when the paper became the sole property of Henderson. On 5 Jan. 1816 he changed the title to The Star and North Carolina State Gazette. The paper was published each Thursday at "the upper end of Fayetteville Street near Casso's Corner."

From the beginning, the Star was a unique newspaper. The editors announced they would print intelligence, congressional, and legislative news in summary only but would not print rumors or "stud horse advertisements." One of their guiding principles was the advancement of agricultural interests in the area and the state. Henderson, in fact, was a proponent of the establishment of an agricultural society in Wake County as well as in North Carolina. Although he was a Federalist, the Star remained fairly neutral politically and devoted most of its attention to agriculture, literature, and culture. For a few years, the pages were numbered consecutively and the editors published a detailed index for each volume. It was later described as the forerunner of the general-interest family newspaper.

Concerned about the lack of communication between the eastern and western parts of the state, Henderson attempted to use the Star as a vehicle for exchange between those areas. On 30 Mar. 1810 he sent a circular letter to citizens in several counties, asking them to provide detailed information about their county's history, geography, and social conditions, presented within about twenty subject areas. In explaining the project to his readers on 26 July 1810, he requested that "men of information" supply a "description of such county as each may be particularly acquainted with." He repeated the notice on 26 Apr. and 3 May 1811, publishing "A Statistical Account of Edisto Island" from David Ramsay's The History of South Carolina as an example of the kind of report he wanted from his contributors. On 1 May 1812, the editors told their readers they were still interested in the project and again requested their assistance. Sketches of twelve counties were written and presumably received by the editors in 1810 and 1811, but apparently none were published in the Star. A. R. Newsome said the editors may have wanted to wait until they received reports of all sixty-two counties or may not have had room to publish them because of the mounting pressure to provide political and military news surrounding the War of 1812. The reports were preserved, however, and were later published in other sources, including the North Carolina Historical Review.

Henderson was also an active citizen of Raleigh. He was a city commissioner, a member of the Town Watch, a director of the leading bank, and a state printer. While he published the Star, he also ran the Star Store on the lower floor of his building on the west side of Fayetteville Street, just opposite the Stone Fountain. The store sold all kinds of merchandise, including books like the Star Almanac and several others he had printed. In Raleigh, as he had done in Halifax, he promoted the cause of drama—organizing and participating in amateur productions, athletic contests, and open-air entertainment. As a major in the state militia, Henderson commanded the Wake Dragoons when the unit accompanied Governor William Hawkins on an inspection of coastal defenses after reports of a British invasion in the summer of 1813. Henderson eventually attained the rank of colonel, for he was universally referred to as "Colonel Henderson."

His participation in community affairs involved Henderson in a near-fatal accident which influenced the life of a later president of the United States. Sometime in the spring of 1811 (Archibald Henderson's account says 1810, but that conflicts with most other reports), while attending a picnic at Hunter's Mill Pond on Walnut Creek, Henderson and two companions were in a canoe that capsized in about 10 feet of water. One of the men could not swim and grabbed Henderson's coat, pulling them both to the bottom of the river. Jacob Johnson, a somewhat poor but respected member of the community, who was on the bank, immediately jumped in, dived to the bottom, and pulled the men to safety. Henderson was believed dead, but was revived by his partner, Dr. Jones, who fortunately happened to be on the bank, too. Henderson suffered ill effects of the experience for nearly a year, but Jacob Johnson was less fortunate. He never recovered his good health and died from exhaustion while tolling bells in January 1812. His son Andrew (born 29 Dec. 1808 in Raleigh) was left fatherless and penniless; because there were no public schools, he could not afford any education. He became a tailor's apprentice in Raleigh before moving west to Tennessee and back east to Washington, D.C., as vice-president and then president upon the assassination of Abraham Lincoln. Henderson remained ever grateful to Jacob Johnson, and honored him with a glowing obituary on 12 Jan. 1812.

The conclusion of the nation's difficulties with the Chickasaw Indians on 19 Oct. 1818 marked a turning point in Henderson's life. The University of North Carolina had received gifts of land in the Chickasaw country from Benjamin Smith and Major Charles Gerrard. In addition, the state legislature had given the university—by way of escheats—all lands in western Tennessee allotted to Revolutionary War veterans but not claimed by their heirs. The state of Tennessee, of course, was not very happy; moreover, concerned about the influx of people from North Carolina, Tennessee appealed to the North Carolina General Assembly to stop the emigration. In the summer of 1821, Colonel Thomas Henderson accompanied a delegation from The University of North Carolina to Murfreesborough, then the capital of Tennessee, to present the university claims for the lands. On 5 Aug. 1821 Colonel William Polk, a university trustee, hired Henderson to oversee the processing of the claims. For his assistance, which he completed in two months, Henderson received one-half of all the land legitimately claimed by the university. The university received 147,853 acres and, even though Henderson had to share some of his portion with his agents in Tennessee, he still received enough to make him a wealthy man.

He returned to Raleigh, but the lure of his western land was too strong to resist. In the Star of 3 Jan. 1823, he informed his patrons that he had sold the newspaper to John Bell and A. J. Lawrence and that he was moving to Tennessee. In his farewell editorial, he wrote, "If I have not promoted the public good in a ratio commensurate with the humble spheres in which I have acted—if I have failed to render due 'service to the state,' it has not been for the want of a willing hand and a devoted heart." A week later, his major rival in Raleigh, the Register, said Henderson "will take with him the good will of his fellow citizens. . . . We believe no personal feeling ever mingled with Editorial duties on either side—and we too wish our worthy fellow-citizen the prosperity and happiness which enterprize and industry always merit." On 27 Mar. 1823, many of Raleigh's citizens gave a farewell dinner in Henderson's honor at Wynne's Bell Tavern.

Henderson, his wife and her parents, and his twin brother Alexander left Raleigh later in the spring of 1823, arriving on 23 May at Mount Pinson in Madison County, Tenn., the estate Henderson had inherited from his father a year earlier. Their home became a center of hospitality and the Hendersons were often entertained at the governor's mansion. The former editor also counted Colonel (then Congressman) David Crockett among his friends. In his own foray into politics, Henderson was defeated in an 1834 bid to be a delegate to the state constitutional convention. In June 1825, he gave notice of the establishment of Mount Pinson Academy, and remained one of its patrons and supporters. When General Andrew Jackson visited Jackson, Tenn., on 18 Sept. 1825, Henderson helped organize a public dinner in Jackson's honor.

Early in 1835 Henderson traveled to a site near Gainesville, Ala., where his brother Alexander had acquired a plantation, with a "view to settling." He became ill on the way and was treated for dropsy by Dr. Robert Hunter Dalton (who had married one of Henderson's nieces) at the physician's home near Livingston, Ala. After remaining there for some time, he went on to his brother's plantation where he died.