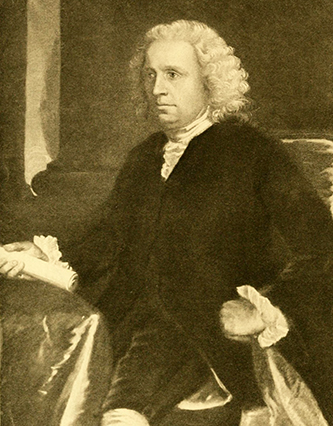 James Murray, colonial official, merchant, and planter, was a native of Unthank, Roxburghshire, in the valley of the Ewes, Scotland, the oldest son of John and Anne Bennet Murray, the daughter of the laird of Chesters. After his father's death, James was apprenticed to a London merchant who was engaged in the West Indian trade. Apparently due to his acquaintance with Governor Gabriel Johnston, Murray embarked for North Carolina on 20 Sept. 1735. After a brief stay in Charles Town, S.C., he arrived on the Cape Fear early in 1736 and resided for several months at Brunswick town.

Murray quickly became involved in the economic and political life of North Carolina. He feuded with the Moore family at Brunswick, possibly due to his friendship with Governor Johnston, and then moved to the rival Newton settlement (Wilmington), championed by the governor. In Wilmington, he opened a mercantile business on Front Street and purchased a five-hundred-acre plantation on the Cape Fear River. With Johnston's support, Murray became a justice of the peace for New Hanover County (1737), a deputy naval officer for the port of Brunswick (1739), and a member of the governor's Council (1739). On the Council he joined forces with William Smith, Robert Halton, and Matthew Rowan in their factional disputes with fellow Council members Roger Moore, Edward Moseley, Nathaniel Rice, and Eleazer Allen.

After a five-year absence in Great Britain (1744–49), Murray resumed an active role in provincial affairs. In 1750 the people of Wilmington elected him a town commissioner, and the following year he was appointed associate justice of North Carolina and commissioner of Fort Johnston. In 1753 Murray became secretary and clerk of the Crown, and in 1754 he was elevated by seniority to president of the governor's Council. During 1755 he held the post of deputy paymaster of the forces sent to the Ohio under Colonel James Innes during the French and Indian War.

With the appointment of Arthur Dobbs as governor in 1754, Murray's role in the provincial government came into question. Governor Dobbs became involved in a bitter dispute with Murray and his cousin, John Rutherfurd, and in 1757 the governor suspended the two men from their seats on the Council. Dobbs accused Murray and Rutherfurd of various crimes, including the charge that Murray had illegally issued unlimited private paper currency that was to be accepted by the colony in payment of quitrents. In communications with the Board of Trade, Dobbs attacked Murray "and his junto," which he contended was attempting to organize a party in the Assembly to undermine the governor and advance Murray's popularity.

It was true that Murray had ambitions of becoming acting governor on the death of the aged governor. In 1761 he privately admitted that if he were reinstated to the Council and no lieutenant governor were appointed, then he hoped to succeed Dobbs as governor. If this possibility did not materialize, Murray planned to leave North Carolina and reside in a healthier climate. In 1762 he was restored by the Privy Council as senior member of the governor's Council; but two years later, shortly before Dobbs's death, William Tryon arrived in North Carolina as lieutenant governor of the colony. Frustrated in his design to become governor, Murray left the province in 1765 and joined relatives in Boston, where he became involved in various business ventures including the operation of a sugarhouse.

As a North Carolina planter, Murray had enlarged and developed his Point Repose plantation, located on the Cape Fear River between Hood Creek and the plantation of Matthew Rowan. Here he grew rice, silk, and indigo; owned a sawmill capable of cutting 100,000 feet of lumber annually; manufactured tar; and became involved in tanning and currying operations. Between 1755 and 1759 he had constructed a "grand and splendid" brick mansion built from bricks produced on the plantation. Due to the death of his wife and children, he became disillusioned with plantation life and turned the operation of Point Repose over to his nephew, Thomas Clark, who became a Revolutionary War brigadier general.

During the American Revolution, Murray remained loyal to Great Britain. When the British evacuated Boston in 1776, Murray fled to Halifax, Nova Scotia, where he died four years later. His North Carolina property, including Point Repose plantation, was confiscated by the state as Tory property. Brigadier General Thomas Clark, the son of Murray's sister, claimed the plantation in compensation for debts owed him by Murray. In 1783 the state awarded the property to Clark, who lived there until his death in 1792.

Murray was married twice. His first wife was Barbara Bennet, a cousin, whom he married in Scotland in 1744. Of their six children, four died in childhood, probably at Point Repose. His two surviving daughters were Elizabeth (m. Edward Hutchinson Robbins of Milton, Mass.) and Dorothy (m. the Reverend John Forbes). After Barbara Bennet Murray died at Point Repose in 1758, Murray married Mrs. MacKay Thompson, a widow, in 1761.

Evangeline Walker Andrews, ed., Journal of a Lady of Quality (1923).

Andrews, Evangeline Walker, and Andrews, Charles McLean, editors. "Appendix VIII. James Murray and John Rutherfurd." Journal of a Lady of Quality; Being the Narrative of a Journey from Scotland to the West Indies, North Carolina, and Portugal, in the years 1774 to 1776. The Colonial Records Project, North Carolina Office of Archives & History. North Carolina Department of Cultural Resources  http://www.ncpublications.com/colonial/Bookshelf/Schaw/murray.htm (accessed August 23, 2013).