Claude Joseph Sauthier, one of the ablest civilian and military surveyors and mapmakers of the Revolutionary period, was born in Strasbourg, Alsace, the eldest child of Joseph Philippe, a saddler, and Barbe Primat Sauthier. Sauthier presumably acquired his skill as surveyor and draftsman during the impressive survey of Alsace made (1757–59) under the direction of the academician Cassini de Thury, whose innovation of triangulation revolutionized European map-making. This survey was followed immediately by the careful cadastral mapping of Alsace by de Luché, Alsatian superintendent. In this Sauthier may also have taken part, as on occasion in the early 1760s he signed himself "Géographe," while mapping several towns, gardens, and battlefields situated in France and Germany. He was already an accomplished surveyor and draftsman. In 1763 he wrote a compendium on architecture with an added section on garden planning. The manuscript contains over forty expertly drawn colored architectural designs, including several for a governor's mansion and nineteen plans for ornamental gardens.

In 1767 Governor William Tryon, who began building the great governor's palace at New Bern, brought Sauthier to North Carolina. Whether or how Sauthier assisted John Hawks, the architect of the palace, in special capacities is not known; he may have designed the gardens. Tryon appointed both architects to make the fortifications protecting the palace in 1771. 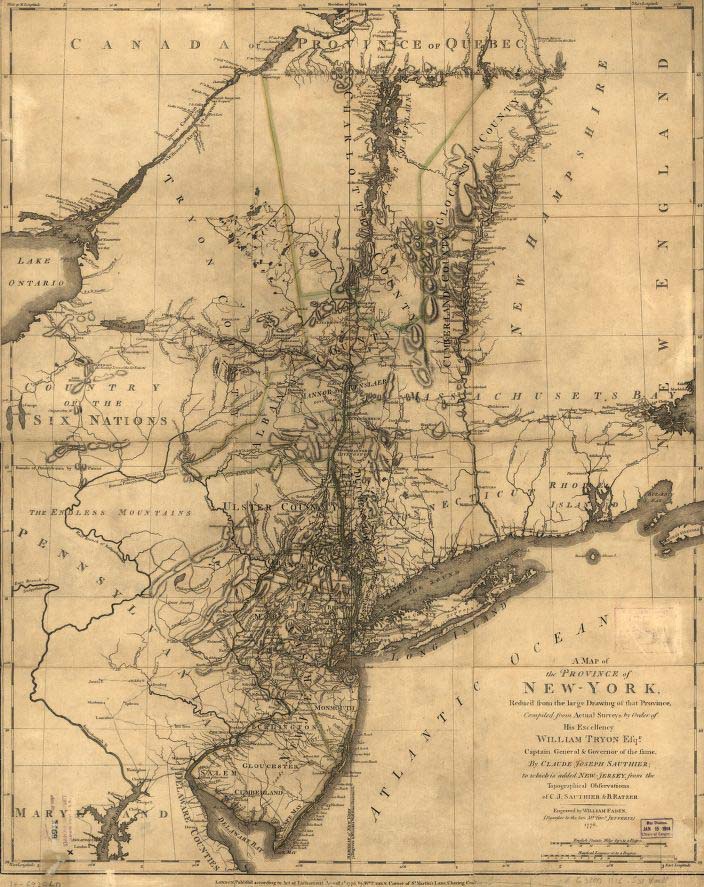 From October 1768 to March 1770 Sauthier surveyed and drew the plans of Hillsborough, Bath, Brunswick, Edenton, Halifax, New Bern, Wilmington, Beaufort, Cross Creek, and Salisbury, set in their environs, with the location of public and private buildings, gardens, farms, and roads. This series of ten town plans, now in the British Library, is unsurpassed in any other colony or province for number, detail, and charm of execution. On 1 Jan. 1771 Tryon commended Sauthier to the Assembly as a "gentleman of integrity," noting his great labor in the town surveys. He also stated that Sauthier had prepared a draft of part of the maritime region of the province from drawings given by various inhabitants, complementing the map of the Granville District made by William Churton. John Collet may have incorporated Sauthier's draft in his map of North Carolina (1770). In May 1771 Sauthier accompanied Tryon to Alamance, where the Regulators were defeated; four drafts of Sauthier's plan of the battle exist.

In 1771, when Tryon was appointed governor of New York, he took Sauthier with him. For several years Sauthier made extensive surveys of the province and the city. His first map of the province, which included surveys by Bernard Ratzer, was published by Faden in 1776; his great "Chorographical Map of New York" appeared in 1779. In 1773 Tryon appointed him New York commissioner to run the boundary line between New York and Quebec. About this time he acquired 5,000 acres from Tryon "for private services" in the township of Norbury, Vt. In 1774 he accompanied Tryon to England and returned with him in 1775.

These peaceful occupations and preoccupations of Sauthier came to a sudden end. With the coming of the Revolution he became a military surveyor and draftsman. After William Howe landed his troops from Halifax on Staten Island in 1776, he ordered Sauthier to survey the island; this very map, with heavy stains on it from field use, is now at Alnwick Castle. When Earl Percy made his attack on Fort Washington, Sauthier on the day of the battle surveyed the field and made a map now in the Library of Congress; I. P. N. Stokes calls Faden's engraving of it the most accurate and probably the most beautiful map of northern New York Island. Sauthier made several other maps for Percy at this time, including a map of New York that shows the fortifications built on General George Washington's orders in the winter of 1776 to defend the city from the British and the area destroyed by the fire of September. Percy evidently thought highly of Sauthier; he took him along to Newport, R.I., and, when he returned to England in 1777, Sauthier accompanied him as his private secretary. After Percy became the second Duke of Northumberland, Sauthier made numerous estate maps, which are in Syon House, near London.

Sometime after 1788 Sauthier returned to his native Strasbourg, where he lived at 14 de la Grand' rue until his death at age sixty-six. There in the library of the Grand Séminaire, where his distinguished younger brother, John-Philippe, was professor of theology and philosophy, are Sauthier's work on architecture and some of his manuscript and printed maps on American and European subjects.

Jones, Thomas, and Edward F. De Lancey. 1879. History of New York during the Revolutionary War: and of the leading events in the other colonies at the period. New York: Printed for the New York Historical Society. http://catalog.hathitrust.org/Record/006255519 (accessed July 11, 2014).

Sauthier, Claude Joseph, and William Faden. 1972. A map of the Province of New-York reduc'd from the large drawing of that Province, complied from actual surveys by order of His Excellency William Tryon, Esqr., Captain General & Governor of the same. [Washington]: U.S. Naval History Division. http://www.loc.gov/resource/g3800.ar104702/ (accessed July 11, 2014).

Sauthier, Claude Joseph, and William Faden. 1972. A map of the Province of New-York reduc'd from the large drawing of that Province, complied from actual surveys by order of His Excellency William Tryon, Esqr., Captain General & Governor of the same. [Washington]: U.S. Naval History Division. http://www.loc.gov/resource/g3800.ar104702/ (accessed July 11, 2014).