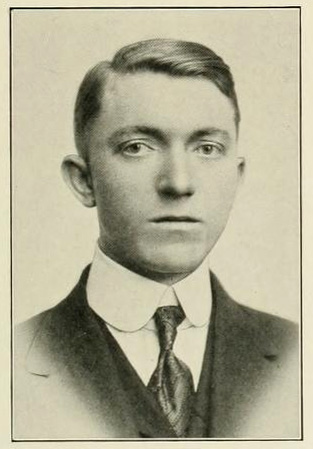 James Vivian Whitfield, foreign service officer and legislator, was born in Seven Springs, the son of James A. and Vivian Powers Whitfield. He received his college preparatory education at Wallace High School in Wallace and at the Horner Military School in Oxford. After graduation from The University of North Carolina in 1915, he returned to Horner as commandant, a position he held until 1917, when he became a military instructor at the university and began graduate study. Majoring in economics, he received a master's degree in 1919.

With the end of World War I and his graduate education completed, Whitfield entered the U.S. Foreign Service in which he served until 1927. He filled tours of duty in Uruguay, Argentina, Cuba, and Mexico.

Leaving the foreign service, he stayed briefly in New York City before settling in Pender County, N.C., where he became a farmer. He served in the North Carolina General Assembly between 1945 and 1953, first in the house of representatives and then in the senate. Whitfield's efforts for a clean environment and the protection and development of natural resources began in the legislature. In 1947 he was chairman of the House Committee on Conservation and Development and introduced a bill to authorize the issuance of bonds for the development of the ports of Wilmington and Morehead City. His first attempt failed, but in the senate he sponsored successful legislation that authorized the original $7.5 million bond issue for this purpose. He helped establish the Stream Sanitation Commission in 1951 and served as chairman from 1956 to 1967, when the commission was merged into the State Board of Water and Air Resources. Governor Dan K. Moore appointed him chairman of the new board, where he served until his death.

He married Vivian Bartlett Stevens, and they had a son, John S. The elder Whitfield died in Burgaw and was buried in Rockfish Memorial Cemetery, Wallace. A portrait of him hangs in the lobby of Pender Memorial Hospital, at Burgaw, an institution he helped establish.