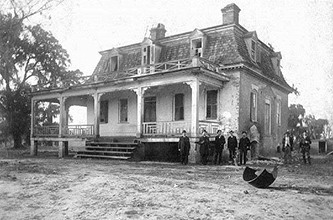 Cornelius Harnett, Jr., Revolutionary War statesman, was born in Chowan County, the son of Cornelius and Elizabeth Harnett. The family moved to Brunswick Town when young Cornelius was only three, and he spent the remainder of his life in the Cape Fear area. Harnett became a leading Wilmington merchant with interests in farming, milling, and mercantile ventures. Along with other business activities, he was a partner in distillery operations which included a still house, wharf, warehouse, and schooner. He became involved in public affairs in 1750, when he was elected to the Wilmington town commission; during the same year, he was appointed by Governor Gabriel Johnston as a justice of the peace for New Hanover County. In 1754, he was elected to represent Wilmington in the General Assembly, a position he held for every legislative session until the end of the colonial period. Harnett's reputation and influence developed rapidly throughout the province. During his career in the legislature, there were few committees of importance on which he did not serve and few debates in which he did not participate.

When the British Parliament in 1765 passed the Stamp Act in an effort to gain revenue from the colonies, Harnett moved to the forefront of the resistance to the act in North Carolina. Along with Hugh Waddell and John Ashe, he was a leader of the citizens' march on Brunswick Town in February 1766, and he served as spokesman for the "inhabitants in arms" in their confrontation with Governor William Tryon. From the Stamp Act resistance was born the Sons of Liberty, and Harnett was chairman for that group in Wilmington. In June 1770, he was elected chairman of a committee to enforce the nonimportation association in an effort to thwart the British Townshend duties.

Throughout the Tryon and Josiah Martin gubernatorial administrations, Harnett was vocal on the major issues facing the province. He advocated government reforms that would curtail abuses complained of by the Regulators in the Piedmont, but at the same time he opposed the riots and excesses of the Regulators. In the Assembly debates over the civil court law, Harnett, along with Robert Howe, William Hooper, Samuel Johnston, and others, led the fight to retain the controversial attachment clause, much to the chagrin of royal Governor Martin.

As resistance to British policy developed during 1773 and 1774, Harnett was in the vanguard of the move in North Carolina. Massachusetts Revolutionary leader Josiah Quincy, after visiting Wilmington in 1773, commented that Harnett was the "Samuel Adams of North Carolina." He was a vocal supporter of the concept of a continental correspondence committee and was a leading force in setting up the North Carolina Committee of Correspondence in December 1773. When the Wilmington-New Hanover Committee of Safety was organized in November 1774, he was the master spirit and chairman of the committee.

On 19 July 1775, Governor Martin watched helplessly from the British warship Cruizer as a group of colonists led by Harnett, John Ashe, and Robert Howe burned Fort Johnston at the mouth of the Cape Fear River. Martin subsequently wrote to Lord Dartmouth requesting proscription of the three revolutionaries because of "their unremitted labours to promote sedition and rebellion here from the beginning of the discontent in America to this time, that they stand foremost among the patrons of revolt and anarchy."

In 1775, a provincial Council of Safety was created to exercise executive and administrative powers over the province. With the flight of Governor Martin from North Carolina during the early summer, the council and provincial congress had become the government of the province. Harnett was elected president of the council, an appointment which in effect made him the chief executive of North Carolina though without the title.

As a member of the provincial congress and as president of the Council of Safety, Harnett was deeply involved in military planning, raising troops, and arming and equipping an army. During 1776 he served on more committees concerned with devising measures for defending the state than any other man. On 4 April, the Fourth Provincial Congress appointed him chairman of a committee to consider the "usurptions and violences attempted and committed by the King and Parliament." The committee report, which was adopted unanimously on 12 April, became known as the Halifax Resolves. The resolution empowered North Carolina delegates to the Continental Congress to "concur with the delegates of the other Colonies in declaring Independency and forming foreign alliances." When, on 5 May, Sir Henry Clinton offered to pardon all North Carolina citizens who would lay down arms and submit to the laws, Cornelius Harnett and Robert Howe were specifically excluded from the pardon.

During the remainder of 1776, Harnett continued to guide the state through his presidency of the Council of Safety. He is generally credited with delivering the first public reading in North Carolina of the Declaration of Independence when he addressed a crowd at Halifax on 1 August. He also had a leading role in writing the North Carolina state constitution, which was drafted in the fall of 1776. When the new government was organized early in 1777, he was elected president of the seven-member council of state established to assist the governor.

Contrary to his own personal wishes, Harnett was elected to the Continental Congress on 1 May 1777; and despite his desire to return home to his plantation, his sense of public duty forced him to remain in the Congress for the full three years permitted by law. Throughout that period his service was capable and statesmanlike. He was committed to the cause of confederation and fully supported the writing and ratification of the Articles of Confederation. 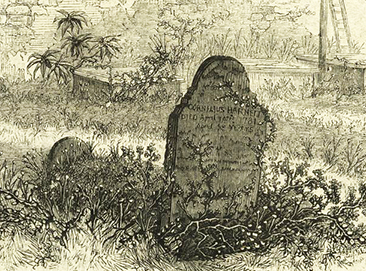 When the British under Major James H. Craig invaded Wilmington early in 1781, Harnett attempted to flee. Crippled by severe gout, he was captured in Onslow County and returned to Wilmington "thrown across a horse like a sack of meal." Imprisoned in an open blockhouse, his health declined rapidly. Although paroled from prison, he died soon afterwards.

A man of liberal mind, Harnett was reputed to be a Deist. His gravestone epitaph would seem to support this conclusion: "Slave to no sect, he took no private road. But looked through nature up to nature's God." Despite these claims, he was a vestryman of St. James Parish in Wilmington and was Deputy Grand Master of North America for the Masonic Order.

Harnett married Mary Holt, the daughter of Martin Holt. They lived at Maynard (later known as Hilton) north of Wilmington and owned a second plantation, Poplar Grove, at present-day Scotts' Hill on Topsail Sound. She died in New York City in April or May 1792. They apparently had no children.

I would like to know if Cornelius Harnett owned slaves?

Because of the time frame he

Because of the time frame he lived in, before the 1790 census, there are several types of records to look at. Tax lists may help and we do have several early tax records online in our digital collection at https://digital.ncdcr.gov/digital/custom/tax-lists. Also deed records and court record as deeds were proved in court. Slaves were considered property, so they were bought and sold like land in the county deed books. Also, looking at the wills and estate records of his father, uncles, grandfather's could tell you if he inherited any. Hope that helps.